As I mentioned in "The Art of the Borgias," I love historical research, even in the frequent cases where the books don't tell me what a historical novelist needs to know. But for the last month at least, I have been tearing my hair out trying to decide what my hero would experience when he returns to the nomadic camp where he spent his childhood.


Thanks to the Internet and some wonderful books I purchased secondhand—most notably, Alma Kunanbay's The Soul of Kazakhstan (with its amazingly beautiful photographs by Wayne Eastep)—I have a good idea of what a Tatar nomadic camp looked like. I can guess what it sounded like: a small group of people on an isolated prairie, surrounded by huge herds of sheep, goats, and horses and intermittently mobilized for war. But what did it smell like? How did the leaders differentiate their tents from the common people's? What distinguished a man's tent from a woman's? When you have to pack everything on a wagon and move it four or more times a year, every belonging must be both essential and deeply valued; otherwise it gets left behind. But how does that knowledge play out in terms of the internal arrangements of a bey's tent? What was essential? What did people value so much that it became essential to them, if not to everyone?


Moreover, my hero left his childhood camp six years ago. In the meantime he has visited and lived in cities: Astrakhan, at the mouth of the Volga, tied into the Persian and Indian trade routes; Kazan, far to Astrakhan's north but still on the Volga, a flourishing commercial city connecting the Siberian hinterland to lands west and south; Moscow, then the emerging capital of a rapidly expanding Russia; Smolensk, on Russia's route to Poland and everything west of Poland. Even Kasimov, the small town where my hero Ogodai has spent the last two years, would have had amenities the nomads could only dream of—books, piped heat in winter, perhaps even internal plumbing systems. He has matured and become cosmopolitan, so things that once seemed normal or even desirable to him may look quite different now. Other things he didn't notice at twelve will stand out, for better or worse.


I have found snippets of information here and there. The Baburnama: Memoirs of Babur, Prince and Emperor (founder of the Indian Mughal dynasty) mentions a visit paid by Babur to his nomadic uncle. I had great hopes of this account, but alas, Babur mentions only that his uncle kept his tent in the old style, with horse tackle piled around the edges and melon rinds scattered on the dirt floor. Indicative, but worth about a sentence and a half even if stolen (and I am not above stealing any useful detail). In another source, I discovered that the steppe nomads used dried animal dung for fuel, which must get pretty pungent as it burns. Milk is also a big part of steppe culture: sour milk, fresh milk, milk spattered to feed ancestors or tossed after departing guests. And meat, which with milk products constitutes a steppe nomad's main food. Butchered meat, cooked meat, tanned skins—you get the picture. Most likely, my hero would not focus on those smells, as his customs would be the same, but he might notice them in passing.


Then I remembered, although I have yet to pinpoint where I read it, that the Mongols traditionally avoided bathing in rivers and streams, which polluted the water and angered the spirits who dwelled there. Nor did they wash their clothes. With water scarce on the steppe, I can imagine that modern standards of hygiene may not have prevailed there, either. By the time of my story, those of the Mongols' descendants who became Tatars had adopted Islam. As a result, they were, on the whole, cleaner in the early modern period than their non-Muslim neighbors (Muslims wash five times a day before praying and bathe their entire bodies after various routine activities). But in the 1530s the nomadic Tatars I am describing were at best nominal Muslims. A visitor accustomed to more stringent application of the purification requirements would certainly notice and deplore near-universal body odor and filthy clothes. And in places where something as basic as water or food is scarce, the elite tend to monopolize it, so that might also mark differences in social status. Not much to go on, but a start.


I am plowing on, trying to create a plausible setting out of these few specks of information. Nonetheless, this is one occasion when I would love to have access to a time machine. Zip in, sniff the air, take notes, zip out. It would make life so much easier. 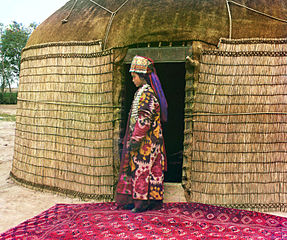 A Nomadic Tent, Photographed in Color by Sergei Prokudin-Gorsky circa 1915
Courtesy of the U.S. Library of Congress.

This photograph shows the tent as it would appear in the summer, without the familiar felt coverings, which provide insulation and warmth.
Posted by C. P. Lesley at 4:26 PM