The Murphy's Law of Microphones


First came the purring. The good news: I'd asked the cat not to meow, and he refrained from meowing. Instead, he provided a nice, gentle purr, showing how happy he felt that he could sit in my lap despite the cold-hearted way I'd abandoned him last Friday to read from The Golden Lynx at my alma mater and my callous insistence on attending ballet class three times that week—right when he was getting comfy, too. Really, how could I complain just because the microphone turned the purr into a roaring jet engine, reverberating like a soundtrack while the hapless interviewee waited for me to dial him up via Skype?

Fortune, as they say, favored me. Right about the time I was wondering whether I would make things better or worse if I shut the cat in a room, he abandoned my lap and the purring for his favorite spot, my printer. Never mind that the poor printer now contains more fur than certain stuffed animals I've known, or that it makes pathetic mousey noises when I ask it to print. When the cat is lying on it, he can stay quiet and relaxed for hours. Which, when I'm facing a 45-minute conversation with someone I've never met for a podcast that I have no experience in creating but need to record for the general public and for posterity, seems like a great idea.

Better still, Sir Percy was ensconced in his office, in the midst of a conference call. Cat #2 much prefers to hang out with him during the day, so I had no need to worry about her either. (She had spent the morning reminding me of just how much noise she could make if she tried.) I had turned off the ringer on my phone, set my computer not to blank the screen, figured out how to keep the swivel chair from squeaking (don’t swivel), finished lunch, and left the coffee downstairs. No smacking, no slurping, no sniffling, no squeaking. No purring. I was ready.

I checked my microphone and recording equipment, as recommended in the NBN Hosts Manual. Well, I knew the microphone was working, since it had picked up the jungle purrs. But the Skype test call didn't record (I think I mentioned in a previous post that I am Skype-challenged). Then I realized the audio capture software works so much better if you click the Record button before recording. Sigh. I hadn't even made the call yet, and I was already down for two.

Let me emphasize that none of the glitches I'm relating here had anything to do with my interviewee, Julian Berengaut. He answered the phone right away and was the perfect gentleman as I staggered through my opening segment (three times, but who's counting). He even said nice things after the recording stopped. Not his fault that I mixed up the name of his publisher (re-record no. 1) or the channel I'm supposed to represent (re-record no. 2) before settling into something that at least didn't make me sound as if I'd dropped in from another planet and had trouble thinking in English. Nor was he responsible for Sir Percy drifting by about halfway through and forgetting the sixteen warnings I'd issued not to talk to me during the interview or Skype deciding to take a break five minutes before the end. Or for my microphone emitting the occasional howl for no obvious reason (why conceal its Braveheart yearnings for the first two-thirds of the conversation?).

There are only so many ways a person can mess up a podcast, and I think I found every last one. So I can't call myself a podcasting queen yet—maybe a podcasting plebe. Still, it was fun. And with luck, I didn’t foul things up to the point where Marshall Poe can’t compensate for my inexperience. As soon as I have the live link, I'll post it, on this blog and on Facebook. Then I'll start practicing, so I can do better next time. I’m determined to earn that crown sooner or later.

Meanwhile, you can follow Julian's blog at http://wormwood-and-honey.com. And check out his book. If you like Russian literature—especially Gogol—I'm sure you will love The Estate of Wormwood and Honey. 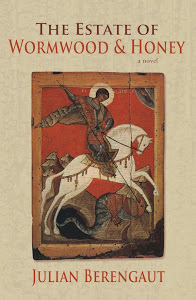