Part of improving as a writer involves reading books about writing as a craft. Not all craft books are created equal, by any means, but sometimes it’s useful to have someone pull back the curtain and talk about what makes a story work.

One of my favorite books of this type is John Truby’s The Anatomy of Story—which, when I encountered it a few years ago, managed to get the concept of story structure through my head without making it sound like a checklist. Other favorites of mine include Lisa Cron’s Wired for Story—about the unconscious expectations in readers’ minds, information that lies behind much of the writing advice in other books—and Jordan Rosenfeld’s Make a Scene, which clarifies fundamentals such as when to show and when to tell. And I must not forget Nancy Kress’s Dynamic Characters, which captures the basic task of all novelists: “In our lives we want tranquillity; in our fiction we want an unholy mess, preferably getting unholier page by page” (159).

I could go on to list other favorites, but in the realm of writerly advice I think many people would put James Scott Bell in a class by himself. So when I saw he had a new book called Write Your Novel from the Middle (all these books have long subtitles, by the way), available on Kindle for $2.99, I decided to give it a try. 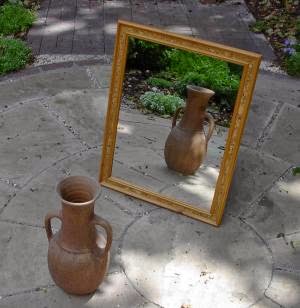 The basic idea, although it pays to read his elaboration, is that in a well-structured novel, the main character has a “mirror moment” right in the middle of the book. This mirror moment encapsulates the protagonist’s character change: she looks in the mirror, literally or figuratively, and sees what is holding her back and what she must do to solve her problem. That moment marks the heart of the story, as distinct from the plot. From there, the writer can move forward to show the character changing—or, in the case of a tragedy, refusing to change—and backward to see where the character starts the story and to imagine what happened before the novel begins to make him that way. (The last step, although crucial for the writer, need be shared with the reader in dribs and drabs, if at all.)

It’s a good idea, and it neatly explains the most important requirement for a novel: a character who changes, or should change but doesn’t, thus dooming herself to physical, psychological, or professional death. But is it really true that the mirror moment occurs right in the middle of the book? Isn’t it later, I wondered, closer to the resolution of the novel?

To check, I picked one of my own novels at random and opened it halfway through. I was amazed. At the very middle of The Not Exactly Scarlet Pimpernel, to the page, Nina has a flashback to her childhood self that reveals how she has distorted the truth about her family and undermined her romantic relationships, a factor that threatens her survival in the computer game that forms the backdrop to the story.

I picked up my other books and checked them, one by one. Two pages before the exact middle of The Golden Lynx, Nasan acknowledges the costs and the joys of her decision to defy convention and takes responsibility for her choice. The events at the middle of The Winged Horse take place outside the main action, but the immediately preceding scene among the nomads shows Firuza deciding for the first time to place her own needs ahead of her father’s and brother’s. Even in Desert Flower, a novel I wrote long before I had a clue that stories had structure, the exact middle of the story shows the hero, Danion, coming to terms with the fact that his life has changed irrevocably and he has no choice but to deal with it. The middle of Kingdom of the Shades again marks a major turning point in Danion’s relationship with his wife, Sasha, as he strives to balance commitments made at different times of his life.

None of this was deliberate. At no time did I sit down and decide that on exactly page 160 the hero should face down his or her demons. Nor do I plan to do that in the future. It just happened, the natural result of writing stories about characters who grow.

So, do you need Bell’s book? I can’t say. That depends on how much writing experience you have. But he’s clearly on to something. Find the middle of your novel, and you will have located its heart. The rest is, in a sense, just filling the blanks.

Of course, if you’re a seat-of-the-pants (pantser) novelist like me, filling in the blanks is where the fun comes in. But knowing there’s a tape at the finish line keeps me on track, no matter how much my plot zigs and zags along the way.

Advice to the Lovelorn

As I mentioned about a month ago , my friend and fellow Five Directions Press writer Claudia H. Long has started an advice column for charac...