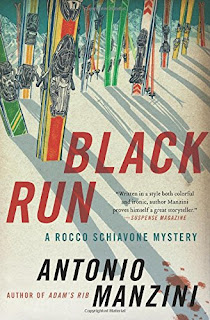 I like a good mystery as much as the next writer. Agatha Christie, Dorothy L. Sayers, Ngaio Marsh, P. D. James, Josephine Tey—but also contemporary writers like Deborah Crombie and Elizabeth George, Gillian Hamer and JJ Marsh—have enlivened many an evening as I puzzled my way through deliberately misleading clues. I tend to prefer cozy to hard-boiled, so when HarperCollins sent me not one but two recently translated mysteries by Antonio Manzini, I wasn’t sure they were going to be my cup of tea. But Black Run and its just-released sequel, Adam’s Rib, are rollicking good reads, with twisty plots and clever solutions and a quite unusual setting.
Deputy Police Chief Rocco Schiavone can’t get over his exile from Rome or the tragedy that has left him mourning the death of his wife. Hard-boiled, profane, and smitten with espresso, Camels, liquor, marijuana, and the urge to check out the pretty women who from time to time cross his path, Rocco regards both his current posting and its local police force with a perennially jaundiced eye. Sure, the town of Aosta is high in the Italian Alps, filled with touristy boutiques, ski runs, chalets, and restaurants, but Rocco has no use whatsoever for snow, scenery, or the unfamiliar culture of a small town where everyone he meets is related to everyone else. As for his subordinates, he castigates most of them as morons. Why, they can’t even remember his correct title. Instead, they insist on calling him by the outdated rank of Commissario. Don’t even get him started on their grasp of investigative procedure. 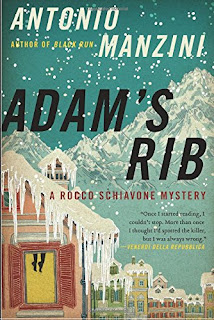 Yet somehow, despite the many obstacles that dot his path, when a lacerated corpse appears on a little-used ski run (Black Run) or a burglary turns out to be cover for a suicide—or is it murder?—(Adam’s Rib), Rocco finds ways to motivate his unsatisfactory officers into finding the information he needs to solve the crime. And each crime turns out to have hidden layers, through which Rocco steadily plods, swearing the whole way about what a pain this all is even as he’s enjoying himself hugely.

Special praise goes to the translator, Antony Shugaar, for a fluid, idiomatic rendition that reads more smoothly than some works written originally in English.

And right now, the e-book version of Black Run is selling for $2.99 (usual price closer to $12.99) on the Kindle and iTunes stores. Not sure how long the sale will last, so if you enjoy complex mysteries and grouchy but likable detectives, this is your chance to discover a new author.