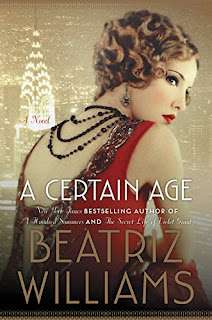 As I mentioned in one of last year’s posts, “The Fog of War,” there seems to be a renewed interest in fictional exploration of the early twentieth century—perhaps because of the ongoing centennial of World War I. I had intended at the time to give a fuller treatment of one title I mentioned in that post, Beatriz Williams’ A Certain Age, a book I absolutely loved, including a Q&A interview with the author. The interview never came off, but Williams has just published another book set in Jazz Age Manhattan, The Wicked City. She has a third, Cocoa Beach—still in the 1920s but set in Florida—due for release in July, at which point I am scheduled to interview her about all three for New Books in Historical Fiction.

Part of the fun of Williams’ novels is discovering characters and settings that have cropped up before. The hero in A Certain Age, Captain Octavian Rofrano, also made an appearance in Fall of Poppies, an anthology of stories commemorating World War I that I featured in “Remembering the Great War.” The heroine’s youngest son, Billy Marshall, plays a role in The Wicked City, which opens in a Greenwich Village apartment building that once housed a speakeasy called the Christopher Club, also featured in A Certain Age. The modern-day heroine of The Wicked City lives in the same building—I think in the same apartment—once occupied by Geneva (Gin) Kelly, who anchors the 1924 portion of the book. And so it goes, in intertwining patterns.

So, what is The Wicked City about? In 1998, Ella leaves her husband after discovering he’s cheated on her. She takes refuge in a tiny apartment on Christopher Street in Greenwich Village, only to discover that her building is filled with tenants who defy the laws of New York apartment living by taking a strong interest in their fellow residents. Attempting to do laundry at the crack of dawn, she runs into Hector, who lives on the top floor and gives her a crash course in the apartment culture of 11 Christopher while she drinks him in with her eyes. He also warns her about the basement, with its ghostly noises and vibrating walls. 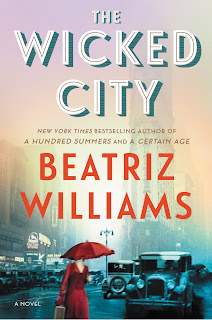 Naturally, Ella has to investigate, and we dive into the other half of the story. The noises and vibrations come from the speakeasy that occupied half the site in 1924. There Gin Kelly, who lives in the apartment next door, spends many an evening drinking and dancing with young Billy Marshall—Princeton man, heir to uptown wealth, and smitten. Until she runs into a revenue agent named Anson who wants her to help him bust up the illegal liquor business run by her stepfather, the very man Gin came to New York to escape.

The two stories take place side by side through a series of five acts: “We Meet,” “We Come to an Understanding,” etc. The writing sparkles, and the vocabulary, the descriptions, and even the reactions of the characters clearly differentiate past from present. More even than in A Certain Age, which combined a story set in 1922 with the solution to a mystery that took place a decade or so earlier, Williams adroitly balances developing romances with darker and more compelling plot lines, and her characters are appealing even when—perhaps especially when—they behave far from admirably. I can hardly wait for the next installment.

P. S. A Certain Age has one of the most gorgeous covers I’ve seen. Bravo to the designers!
Posted by C. P. Lesley at 1:40 PM