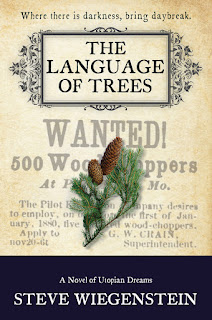 Steve Wiegenstein, the author of three novels and a finalist for the first MM Bennetts Award in Historical Fiction in 2015 for This Old World, agreed to talk with me as he gets ready to release the third book in his Daybreak series. The Language of Trees comes out next Tuesday, September 26, and is already available for pre-order at Amazon.com (just click the link to find out more). And of course, read his answers below!

The Language of Trees is the third novel in your Daybreak series, following Slant of Light and This Old World. Could you give us a brief sketch of the background developed in those first two novels that will help readers approach The Language of Trees?

The books interlock, but my overarching goal is to make each book a satisfying aesthetic experience in itself, so readers shouldn’t worry if they haven’t read the earlier ones; they can still enjoy the next one. That being said, here’s what happened in the first books. Charlotte Turner, along with her husband James, established the Daybreak community in the 1850s as an experiment in communal, egalitarian living on the order of Brook Farm and New Harmony. The colony attracts a wide range of idealists, but James’ personal failings reveal themselves as he develops autocratic tendencies and engages in an affair, which results in the birth of Josephine Mercadier. Charlotte emerges as the community’s true leader and manages to hold Daybreak together, but the coming of the Civil War sends the men off to fight while the women remain behind. After the war, James returns a broken man, but redeems himself by protecting Josephine from her violent stepfather, an act which results in his death. Charlotte, Charley Pettibone, and the other founders of Daybreak carry on.

You live in the Ozarks. You have an active outdoor life and a teaching career. What made you decide to write novels—especially novels about a utopian nineteenth-century community? And having decided, how did you go about mastering the craft?

My mom was a writer, and I grew up admiring the art. In fact, the romantic ideal of the journalist-turned-novelist, embodied by writers like Stephen Crane and Ernest Hemingway, is what led me into journalism originally. I wrote a novel in my twenties but it wasn’t particularly good—it was poorly crafted and written for the wrong reasons. So I became a teacher, all the while continuing my craft with a lot of short stories. I grew interested in nineteenth-century utopias because they represent the distillation of American optimism, and I’ve done a good bit of scholarship on them. Then one day in late 2006 the idea of combining my passion for fiction with my understanding of utopias, and setting a series of novels in my home region, came to me like a flash. I’ve been working on this project just about every day since.

The Language of Trees brings to adulthood a new generation in Daybreak, which leads to a generational clash between the community’s founders and its heirs. One source of conflict is industrial development, which threatens the agricultural environment as well as the philosophy of the Daybreak community. What made you decide to explore this particular conflict, and what can you tell us about it as it plays out in your book? 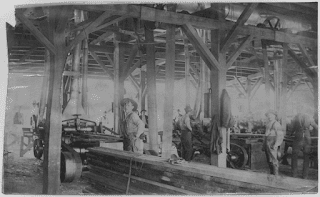 One thing I’ve learned about utopian communities is that communities founded by a charismatic or visionary leader rarely continue if that leader dies or becomes discredited. So I wanted to continue the story following the classic lifespan of utopias. Also, the 1880s saw the real boom of the Industrial Age, when it seemed as though moneyed interests were going to overwhelm all other elements of society, and there were efforts to resist that seemingly irresistible force. Nowadays we remember that as largely a labor-movement and progressive government resistance, but there was also a rural-urban dimension to that struggle that I wanted to capture. So it’s a very rich time period for exploration, and one that tends to get overlooked or oversimplified. I really think that the urban-rural divide that is so prominent today has its roots in the coming of industrial methods to rural life in the late nineteenth century. Another one of those “understand the present by understanding the past” opportunities!

As befitting a book about a communal utopia, your books trace the life of a community rather than focusing on one or two individuals. There are lots of point-of-view characters, who often see the world in contrasting ways. You do a remarkable job of keeping them both real and separate, but is it difficult to juggle so many different perspectives?

It is, especially since there are times when several of them are in action simultaneously. I had to do a good bit of revision to make sure that I didn’t have a character in one place at the end of a day, and then magically appear in another place the next morning. But as you say, it’s the story of a community rather than an individual, so I thought that moving the point of view from character to character would be important in giving a sense of the totality of that experience. Flowing the action in and out of various characters’ minds is a challenge, but it’s also great fun! I hope readers will enjoy the ride.

Do you have a favorite character and story?

Charlotte Turner has been my favorite since the beginning of the series. She’s a character who just keeps growing and changing as the series develops, in ways that I would not have predicted at first. Non-writers sometimes scoff at our claims that characters can develop and change in ways outside our conscious control, but I’m here to testify that it happens. Charlotte is tough beyond all reckoning, but she also has an immense capacity for love that keeps her going on despite all the struggles that life has given her.

As far as a storyline goes, I am awfully fond of Charley Pettibone’s. He started out in the first book as a goofy, illiterate orphan who more or less chanced into the community and who got caught up in the rush to glory that many young men experienced at the beginning of the Civil War. He came back from the war in the second book as a bitter, hardened young man who was at odds with everyone, but who discovered there were second chapters in life. And by The Language of Trees, he’s become someone who other characters look to for guidance. Of the various characters in the series, he may be the one who has grown the most.

What are you working on now?

The fourth book in the series will take us into the twentieth century with a novel set in the years 1903–1904. That’s another endlessly interesting time period to me. Here in Missouri, it was the time of the Louisiana Purchase Exposition, better known as the St. Louis World’s Fair. What a fascinating event! Intended as a celebration of American technological and racial superiority, it also revealed deep splits in the national mind. As an Ozarker, I’m also piqued by that period because it’s about then that the word “hillbilly” first came into use and the popular image of the Ozarks started to take shape. 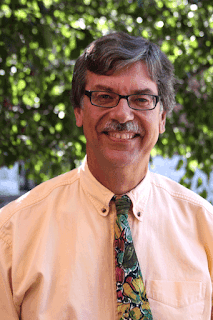 Steve Wiegenstein was born and raised in the eastern Missouri Ozarks—his folks grew up on adjoining farms, and his family roots go deep in Madison, Iron, and Reynolds counties. He went to college at the University of Missouri. After a few years as a newspaper reporter, he returned to school and became a college professor. He is an avid canoer, rafter, and kayaker; a longtime member, friend, and supporter of the Quincy, IL, Unitarian Church; a fan of the St. Louis Cardinals; and a board member of the Missouri Writers' Guild. Learn more about him and his books at his website and blog.

Image credit: “Men Standing in the Lumber Yard at the Ozark Lumber Co., Near Winona.” National Archives and Records Administration (NARA), no. 283583.
Posted by C. P. Lesley at 9:00 AM