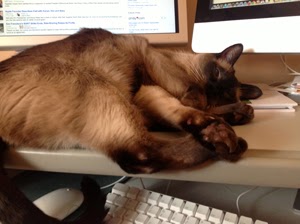 A couple of years ago, I wrote a post about the adjustments in my household necessitated by the ten-day visit of a new cat, unfamiliar with Siamese cat rules and—at that time—still adjusting to the idea that people also have rules and water squirters to enforce them. If you’d like to read that post, you can find it at “Cat Wars.” But the takeaway was simple: you want to socialize a cat, another cat can do it way better than you can. In short, my senior citizen, then fifteen and a half, licked, hissed, and stared the newcomer into shape in no time flat. The rest of us still had some issues, and the newcomer had issues with us, but the two of them worked things out in splendid style.

Advance a couple of years, and the newcomer, Cat #3, now referred to by the Filial Unit as the “grand-cat,” returned for another stay. The original girlfriend moved out, and another has stepped up to the plate, but the grand-cat remains with the Filial Unit and thus with the family. And while I had some doubts about repeating the socialization experiment, clearly the grand-cat could not remain all alone for almost a month in a small apartment with nothing but an automatic feeder and an occasional visit from friends. So I said sure, bring him along. Sir Percy, in an explosion of fatherly generosity, even drove to collect Filial Unit and cat to prevent any issues with the train.

What happened next was mostly pleasant. The grand-cat had become vastly more mellow as a general rule, due to intensive human intervention, although still a bit trigger-happy with his claws. He came out and roamed about within the first hour and showed considerable resilience, given that he’d been transported against his will into a house that already contained two resident cats. His attempts to scratch couches and walk on counters were mostly controllable with a water squirter, although he never quite gave up on either. And he clearly remembered, if not at once then within a short period of time, the deal he had worked out with Cat #1, now a magnificent seventeen and a half and slowing down a bit, but still capable of telling young whippersnappers to get off his lawn and stay off.

The surprise this time was Cat #2, the female rescue now approaching ten years old (the newcomer is four at most). She never hid in the closet for days, as she did during the first visit, so she’s either mellowed considerably or she too had some kind of memory that let her start where she left off. However, she did retreat and refrain from any challenge for the first week and a half, letting the boys jockey and strut.
Then came Day 10. The three of us mere humans had our morning coffee interrupted by a mind-blowing shriek, mixed with a loud hiss and the unmistakable sounds of cats tussling. From then until the grand-cat left (no doubt thanking his lucky stars to be free of this virago who’d appeared to be such a pussycat [sorry—couldn’t resist that  one]), Cat #2 stalked him, attacking at least once a day while the visitor did his darndest to avoid getting on her feline radar. He was perfectly sweet to her, while she went for him every time she saw him. At first I left them to it, figuring they’d work it out. But the day before Cat #3 left, when Cat #2, two-thirds his size, had this fluffy Tuxedo-type bruiser trapped against a wall and refused to back down, I picked her up and carried her off long enough for him to make his getaway. Clearly, no working out was likely to take place in the next twelve hours. 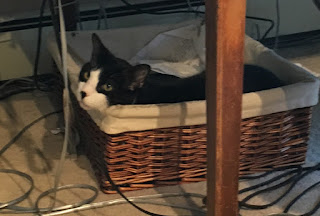 So you know what they say: Hell hath no fury like a woman scorned. Or in this case, a girl cat who’s had her territory invaded and has decided she just ain’t gonna take it any more.

Images: Cat #1 enjoying his leisure time; Cat #2 plotting her next foray; Cat #3 in a basket wondering where he went wrong and what he has to do to get the Filial Unit to take him home, where he belongs.

Yes, I know, it’s only six weeks since the last bookshelf post. But with the pandemic dragging on and spring finally on the horizon, I have ...