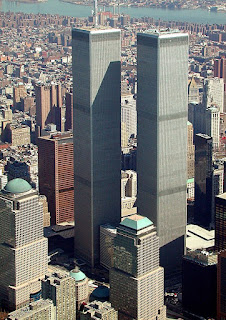 Nineteen years ago on this date, in what seems now like another universe—so much has happened in the interim—I was getting ready to walk upstairs and start my workday when my husband came in and turned on the TV. It was 8:45 AM, give or take a minute or two, and I objected. “Since when do you watch TV in the morning?”

“Something’s happening in New York,” he said. And as we watched, the second plane crashed into the World Trade Center. One could have been an accident, but two made the conclusion inescapable: someone had done this on purpose. From the moment it happened, on a clear blue day with no signs of rain, the nightmare was immediate and all-encompassing. A third plane attacked the Pentagon; a fourth, commandeered and diverted by its passengers, crashed in a field in western Pennsylvania. The images played nonstop on the news broadcasts for days.

Two weeks before, we had attended a family wedding in the city. I remember pointing out the Twin Towers to our then young son. The wedding itself was held in Lower Manhattan, the area most devastated by the attack. It was not the first terrorist attack using planes or even the first on the World Trade Center, but even now, almost two decades later, the loss of three thousand people, many of whom were just going to work and minding their own business is shocking, horrifying.

So let’s take a moment to remember those workers as well as the first responders, the orphaned children and widowed spouses, and the many other deaths caused by the attack through the wars in Iraq and Afghanistan—all casualties of 9/11, together with our lost innocence, our sense that such atrocities could never happen.

Perhaps we were naive to believe that we were immune from danger. People inflict horrors on one another throughout the world and throughout time. The United States has been both perpetrator and victim, and the current unrest over the very real abuses committed against US citizens of color shows that even internally the country has a long history of violence. In that sense, the safety of the pre-9/11 world was as much illusion as fact. It’s not enough to recall and honor the past. We also need to craft a better future.

An entire generation has grown up since then. Some of its members are the children of those who died. Like the ordinary workers and their families, and especially the heroes who willingly sacrificed themselves to help others, they too deserve their moment of homage, our acknowledgment of what they lost.