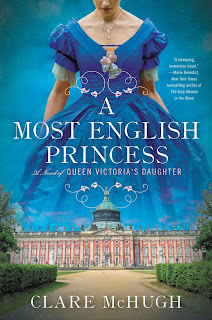 I love a good novel about Tudors or Windsors as much as the next person. But I also admire—and enjoy books by—novelists who go beyond the “short list” of literary favorites to explore the lives of often undeservedly ignored historical figures. Princess Vicky, the eldest daughter of Britain’s Queen Victoria, is one such personage. Raised in the knowledge that, no matter how competent or knowledgeable she might be, she would probably never have the opportunity to fill her mother’s shoes, Vicky entered into a typical royal marriage and did her best to cope with the expectations of a country that had little use for her strong personality or her liberal ideas. It is in some ways not a happy story, but as told by Clare McHugh in A Most English Princess, it is both a compelling and a rewarding one.

Clare was kind enough to answer my questions about her book and how she came to produce it. Read on to find out more.

A Most English Princess is your first novel. How did you get into writing fiction?

I have a dog-eared copy of John Gardner’s On Becoming a Novelist that I read repeatedly and carried around for years. But I struggled to believe that I could write a decent book: I revere too many authors. The abrupt end of my career as a magazine editor made me think: if not now, when? I just jumped in. I was lucky to find a good teacher and a good editor who helped me a lot. Fiction is very different from journalism, which I practiced for thirty years.

And what drew you to the story of Princess Vicky?

Like Vicky, I am the eldest in my family and have a brother just a year younger. I could relate to how painful it would be to be passed over—as she was for the throne—because she was considered “lesser,” a girl. It’s a good thing that the law was changed after Prince William married Kate Middleton, and now the eldest child of either sex inherits. It’s interesting to note that Vicky was the last person passed over because she was female. The monarchs since Victoria either had boys first, or in the case of the current queen’s father, only girls.

When we first meet Vicky, she is at the end of her life and the empress of Germany. What made you decide to start there?

I aimed to heighten the stakes by showing readers that this is not a happily-ever-after story, and that Vicky, a very privileged person, had to cope with some terrible disappointments. Being a princess is not all it’s cracked up to be, even in the old days. I also wanted to contrast her relationship with her surrogate son, her godson Fritz Ponsonby, and her actual son, Kaiser Wilhelm. The former revered her, and the latter opposed her. How did that come about? I hoped readers would be intrigued by this question and read on.

We soon go back in time and encounter Vicky as a young girl. How would you describe her, and what is the basis of her grievance against her brother Bertie?

Vicky was a very confident, very talkative, very bossy little girl. As a child she was well aware she was the superior student and physically more able than her younger brother—she could ride, swim, and climb better than he. Bertie struggled, especially in the schoolroom. Today, we would describe Bertie as having mild learning disabilities. But Bertie had a very affectionate personality, and while Vicky thought she would be a better heir and as the eldest deserved the throne, when she was a young child it was explained to her why that could not be. After that she contented herself with telling Bertie what to do and recruiting him for various games of her own devising. They were good friends their whole lives long except when politics interfered!

How does Vicky relate to her famous parents, Queen Victoria and Prince Albert?

It was a tricky dynamic between the three of them. Prince Albert adored Vicky and showered her with praise and attention. Queen Victoria often felt jealous, and it’s hard to blame her because Prince Albert was in the habit of scolding his wife for her perceived shortcomings! But after Vicky left home, she and her mother became very close, exchanging letters several times a week, as they commiserated on the challenges of royal life, Vicky’s difficult in-laws, and the raising of many children.

And how does Vicky get to Prussia? What are the highlights (or low lights) of her experience there? What makes her story “tragic,” to quote your book description?

Vicky marries Fritz, the heir to the Prussian throne, and moves to Berlin with him, but from the very first the Prussian royal family treats Vicky badly. In some ways it echoes what happened between Meghan Markle and the British royals—a bad fit. Vicky was a liberal, trained by her father to believe in democratic government, freedom of speech and religion, and more rights for women. Not only did many Prussians disagree with these ideas, they resented that this teenage princess presumed she could arrive and tell them how to run their country. And Vicky sometimes lacked tact. But her predicament was made much worse by bad luck. Her and Fritz’s firstborn son was born with a withered arm, the Prussian government was taken over by the autocratic Otto von Bismarck, who was deeply suspicious of Vicky, and then three wars made Prussia the dominant power in Germany. The German nation was united under a very militaristic and bellicose Prussian regime, and Vicky’s damaged son was subsumed into this nationalistic atmosphere, rejecting the liberal ideas of his parents. The whole world suffered because of the way history played out in this family, in this country.

I am toggling between two things. I am outlining a second book about Vicky, concerning her husband’s ninety-nine-day reign as Kaiser, and her efforts to protect him and advance his liberal ideas. I will go forward with it if readers seem to like Vicky. I am also writing a historical novel set in 1970s and 1980s America, a period I know much about first hand. 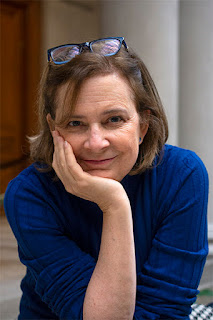 Before turning to fiction, Clare McHugh worked as a journalist, magazine editor, and history teacher. Born in London, she grew up in the United States and graduated from Harvard with a degree in European history. A Most English Princess is her first novel. Follow her on Twitter (@Claremch) and check out her website claremchugh.com for blog posts, details of her research into the royal families of Britain and Germany, and her book reviews of both fiction and nonfiction.