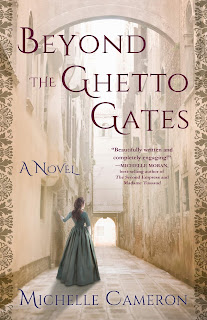 In addition to the pure fun of writing—an escape especially welcome in this anxious time—one thing I get from reading and creating historical fiction is a chance to give voice to the often-voiceless women of the past. Expectations of what women can do have changed dramatically even during my lifetime, although beliefs about what women should do are slower to evolve. Amid the ongoing pandemic, for example, married women have left the workforce at much higher rates than men, in part because they are more likely to bear primary responsibility for child care and family health than their husbands.

My latest New Books in Historical Fiction interview with Michelle Cameron addresses this conflict between can and should head-on. Mirelle d’Ancona, the heroine of Cameron’s Beyond the Ghetto Gates, is even more constrained than most young women of her time because, as a Jewish maiden in eighteenth-century Ancona, Italy, she cannot leave the ghetto between dawn and dusk. Even during the daytime, she must wear a yellow scarf so that the town’s Christians know to give her a wide berth.

Mirelle has all the traits required of marriageable girls in her place and time: youth, prettiness, a respectable family, an impeccable reputation for virtue (meaning chastity). She also happens to be something of a math whiz, the only member of her family capable of balancing the books. Mirelle loves the pure clarity of numbers the way her father and brother adore the artistic flourishes that have made their ketubot (Jewish marriage licenses) an international sensation. 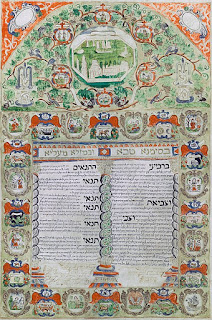 On the first page, Mirelle saves her father from the demands of an unscrupulous supplier—money that would have made it impossible to pay the workers. Although the local rabbi complains that the presence of a young woman in a workshop producing religious documents may distract the male scribes and artists from their duties, Mirelle knows her father needs her help—and her father agrees. Nonetheless, she is banished from the workshop. She learns that she is a financial asset to her family in more ways than one when a wealthy Jewish merchant offers her marriage and a handsome dowry.

When Napoleon’s army invades Italy in 1796–1797, everything changes. In secular Republican France, Jews are citizens, equal to everyone else, and Napoleon does not hesitate to lift the restrictions imposed by the Ancona authorities. While Mirelle’s intended husband becomes a man of influence under the new regime, she meets and falls in love with a handsome French soldier, and before long she must choose between duty to her family and the desires of her heart.

The intense interest in the horrors of World War II that has characterized the last few years has tended to overshadow other aspects of the long history of Jewish populations in Europe and the antisemitism that often—although not invariably—complicated that history. Michelle Cameron’s new novel, Beyond the Ghetto Gates (She Writes Press, 2020), explores one little-known episode of that past: the effect of Napoleon’s invasion of 1796–97 on the Italian port city of Ancona.

The campaign of French revolutionary troops to conquer the still-disunited land of Italy has unexpected consequences when they free the Jews of Ancona from the ghetto that has confined them at night for as long as Mirelle, the young and mathematically gifted daughter of a local artist who manages a workshop devoted to producing Jewish marriage licenses, can remember. As the troops settle in, liberals who welcome change face off against opponents set on turning back the clock, expressing their fears through brutal attacks.

Amid this increasingly chaotic atmosphere, Mirelle faces a choice between what her family wants for her—an arranged marriage to a wealthy Jewish merchant old enough to be her father—and what she wants for herself, a romance with her cousin’s best friend, a handsome French soldier. Meanwhile, Francesca, a devout Catholic, struggles to reconcile the demands of her marriage and her faith when her abusive husband becomes involved in the spiraling conflict.

At times disturbingly relevant to the increasing polarization of our time, including the reactivation of white supremacy movements and intensifying fear of the “other,” Beyond the Ghetto Gates is also, as the author herself notes, “a story of hope—a reminder of a time in history when men and women of conflicting faiths were able to reconcile their prejudices in the face of a rapidly changing world.”