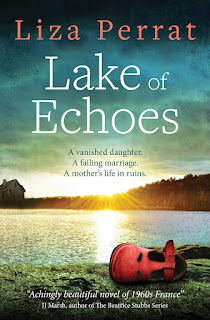 Although I know that the 1960s, even the late 1960s, technically qualify as historical fiction (set fifty years or more before the time of writing), it still knocks me back a bit when I see events I remember from my own childhood showing up in a historical novel. Such is the case for the student protests in Paris in 1968, which form the backdrop to Liza Perrat’s latest novel, Lake of Echoes.

I should mention that although Liza and I have never met in person, we became acquainted on GoodReads a decade ago and bonded because we were both publishing with writers’ coops. Hers, Triskele Books, is now in abeyance; mine continues, albeit with a changing list of authors. I consider her a friend. But when I recommend her books—Lake of Echoes is the sixth I have read and enjoyed; she has written another that I have not yet read as well as a short story collection—I do so unreservedly, as a blogger/reviewer/fellow writer, without considerations of friendship. As you’ll see if you read on, this latest novel has elements of mystery and suspense. What you can’t see from Liza’s answers is that the book is fast-paced and twisty, utterly gripping, and emotionally wrenching. Do yourselves a favor, and give it a read. You won’t regret it!

Lake of Echoes starts off a new historical series for you. What drew you to this particular story?

After writing a French historical trilogy, then three Australian-set drama novels, I hankered to return to a backdrop of rural France, where I live. I’ve always loved history, but wanted this book, the first in a new French village series, to take place more recently—i.e., the 1960s—rather than much further back, as in The Bone Angel trilogy. The 1960s in France was a time of interesting social change, revolution, and feminism. Given that I like to write about strong female characters, this seemed like a good time period.

Also, I have always been fascinated by psychopaths and cult leaders and by child abduction. So I was able to explore these themes in Lake of Echoes.

The background to your novel, France in 1968–1969, is tense even without the specific events that you introduce. Why are people so worried about communists and similar social movements?

The French Communist Party peaked in strength around the end of World War II, and by the time the German Occupation ended in 1944, the party had become a powerful force in many parts of the country. The party supported the May 1968 student riots and strikes. So during the period my novel takes place, the party was still strong, and people were fearful of not only the communists but the Soviet Union and the Cold War.

Tell us about Léa, your protagonist although not your only point-of-view character. She’s not in a great place at the beginning of the story.

Léa is exhausted from running her lakeside inn—L’Auberge de Léa, which is busier than ever during this summer holiday period. Whilst she is happy to have her independence and a venture of her own, she is disappointed and frustrated at her husband’s lack of both physical and moral support. This situation leads to the couples’ increasing arguments.

Her husband, Bruno, has agreed to her managing a country inn, but he’s not exactly supportive. What’s his story?

Bruno comes from the old school of men who believe a wife’s place is in the home, and her sole purpose in life is to take care of her family. Like so many men at that time, he cannot conceive of a financially independent woman.

And how does their daughter come to be missing?

During the summer school holidays Juliette frequently overhears her parents arguing and runs off, taking refuge in the auberge grounds. But one final argument is the straw that breaks the camel’s back, so she flees again. Unfortunately, a storm is raging, and young Juliette loses her way.

Although we don’t know until the end who The Lion is, we meet him early on. Without giving away spoilers, what can you tell us about him, and why did you decide to include his point of view and that of his twin sister, Alice?

He’s a narcissist who suffered from the death of his mother when he was just eight years old. He believes he’s The Lion, king of the animals, and superior to other people. This leads to his warped, deluded ideals and projects. His role in the story, as well as that of his twin, Alice, is very important, so I wanted to give his point of view in the hope the reader might better understand him. I also wanted to portray why Alice is under his thumb and acts the way she does.

Ideally, I would like to write several stories in this Sainte-Marie-du-Lac series. I am currently mulling over a few ideas for book 2, which has the working title Lake of Widows.

Thanks so much for inviting me onto your blog, C. P. 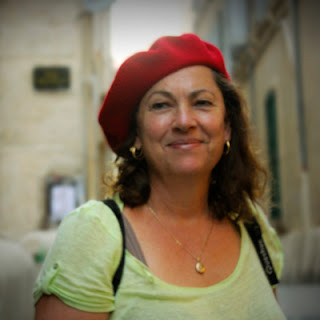 Liza Perrat is the author of the Bone Angel trilogy, which follows three women from one French family during the French Revolution, World War II, and the Great Plague of 1348. All three books can be read as stand-alones.  She has also written a second historical series set in 1960s Australia: The Silent Kookaburra, The Swooping Magpie, and The Lost Blackbird.

Find out more about her at https://lizaperrat.com, where you can sign up for her occasional newsletter about new book releases and receive a FREE copy of Friends & Other Strangers, her award-winning collection of Australian short stories. If you enjoy Liza’s books, follow her on Bookbub.

You can also learn more about The Bone Angel trilogy from my 2017 “Interview with Liza Perrat” and the Australian trilogy at “Changing Times.”