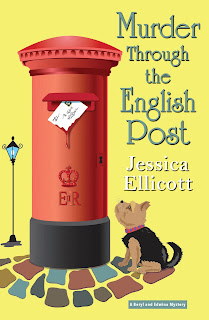 In a time when even e-mail has become old hat—replaced by texting, instant messaging, and ever-changing social media—the idea of mischief delivered several times a day through letters (or, for that matter, a postal service so functional that it can deliver several times a day) seems rather quaint.

But it’s supposed to be quaint. Jessica Ellicott’s Beryl and Edwina Mysteries follow the adventures of a pair of school friends, reunited years later in 1926. Beryl Helliwell needs housing in a hurry, and who better to provide it than her old school pal Edwina Davenport? Even though Beryl’s choice means abandoning world travel for life in a quiet English village, she soon discovers that more goes on under the surface of that village than anyone would suspect.

Six cases later, we get to Murder through the English Post, where a series of anonymous letters threatens to expose old tensions in the village and spark new ones. Jessica Ellicott was kind enough to answer my questions, so read on to find out more.

This is your sixth mystery featuring Beryl Helliwell and Edwina Davenport, as well as the adorable Crumpet. What inspired you to start this series?

I have always loved mysteries set in England, especially those set during the Golden Age of Detection. I also enjoy books about friendships between women. My best guess is that the series sprang into mind from those preferences in the magical way that such things do!

You have two leads. Tell us first about Beryl. Who is she, and what is she like as a personality?

Beryl is an American adventurer who has become a celebrity by her verve and panache. She hasn’t met a speed record she wouldn’t like to break, and she is up for most any sort of experience that does not involve tending children. She is an outgoing and exuberant soul who has little experience staying put.

Edwina’s background and personality are quite different. How would you describe her?

Edwina is the sort of person who helps make a community work. She is a genteel woman who knows just which words to say to soothe ruffled feathers or to inspire confidences. She is open to change so long as she can feel convinced of the merit of it.

And what brought these two together?

Beryl and Edwina first met at Miss DuPont’s Finishing School for Young Ladies. They were reunited years later when Edwina faced financial difficulties and decided to advertise for a lodger. Fortunately for her, Beryl was looking for a room to let. They’ve been living and working together ever since. 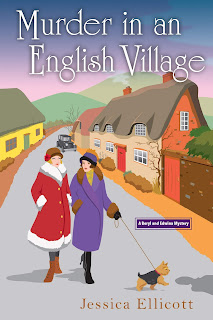 No novel set in an English village would be complete without a dog. Tell us a bit about Crumpet and his role in the books.

Crumpet is Edwina’s faithful shadow. He loves to take her on long rambles throughout the countryside, which can offer her a convenient excuse for a bit of surveillance. While he is not central to the novels, he is a cheerful little fellow to include in the stories.

The current  mystery, as the title suggests (and it’s a great title, by the way), involves letter writing, which is almost a lost art these days. Set the situation up for us, please.

I am delighted that you like the title! I had not yet written a novel centering around a poison pen campaign and was eager to do so. This mystery involves a deluge of such letters, which expose secrets and point fingers at most of the residents of Walmsley Parva. Ultimately the ugly accusations and insinuations lead to murder.

Beryl and Edwina’s relationship with the local police officer, Constable Gibbs, seems to have improved quite a bit since Murder in an English Village. But the constable is an interesting character in her own right. Why cast a woman in this role, given that the series begins in the 1920s? And how does Constable Gibbs approach her job?

I was intrigued by the jobs women performed during World War I and how the end of that conflict impacted the trajectory of those careers. Women were generally forced out of positions as constables after the men came home, and I was interested in imagining the sort of woman who would not be set aside. Constable Gibbs dedicated herself to serving her tiny community with the same sort of professional rigor as an officer in a more populated locale. Her fellow villagers generally appreciate her performance, and besides that, given her forceful personality, no one thought it wise to ask her to vacate her position!

I am working on the seventh Beryl and Edwina mystery right now. In it the sleuths return to the finishing school where they first met. The school’s head, Miss DuPont, has asked for their help in discovering who is behind a series of incidents that appear intended to damage the school’s reputation and sabotage her business. Both of them are too well-mannered, thanks in part to Miss DuPont, to leave a lady in the lurch, so they cancel their plans and head directly for London. 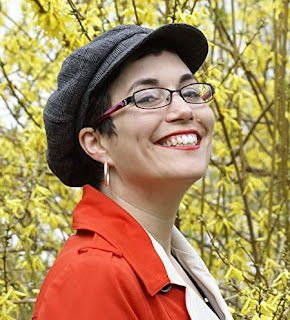 Agatha award nominee Jessica Ellicott lives in northern New England, where she indulges her passion for all things British by writing the Beryl and Edwina Mysteries. She also writes mysteries under the names Jessica Estevao and Jessie Crockett. Her books have twice received starred reviews from Publishers Weekly as well as one from Library Journal. Her first novel won the Daphne du Maurier award for mystery. Find out more about her at https://jessicaellicott.com.