One of the interesting trends I’ve noticed in the last couple of years (although it’s been developing for much longer than that) has been a diversion of fiction set in Regency Britain from pure historical romance to mysteries, some of them quite gritty in their exploration of the slums and class differences that were as much a part of early nineteenth-century British society as the extravagant parties favored by the haut ton and the bucolic settings of Jane Austen’s novels.

Darcie Wilde’s Rosalind Thorne (now renamed A Useful Woman) series exemplifies this trend in its own particular way. Her heroine, as explained below, exists at the edges of aristocratic society, where she belongs by birth but not wealth. That gives her access to the drawing rooms of the rich and famous, but always as an outsider hired to perform a particular function. Ladylike to a fault, Rosalind combines a mastery of conventional behavior with an independent spirit and an observant eye. Read on to find out more, then seek out not just The Secret of the Lost Pearls—which releases on December 27, next Tuesday—but the earlier books in the series. Although you can read the books in any order, you will get the best appreciation for the various relationships and the fewest spoilers if you start at the beginning and go from there.

This is the sixth of your mysteries featuring Miss Rosalind Thorne. I’ve enjoyed all the ones I’ve read, and I tend to think of them as examples of what might have happened to Lizzie Bennet if she hadn’t married Darcy. How did you come up with this particular take on Regency society?

First of all, thank you for inviting me to your blog! My take on the Regency actually comes—and I should probably apologize for what I’m about to say, but—straight out of Austen. Jane Austen and her contemporaries were very much responsible for creating the modern novel. Like Austen, they dealt with women’s lives, with money, family, love, status, success, and failure. The lives, loves, and travels of all these women are fascinating as well, as were the various reasons they wrote. Some of them were world travelers, some of them were ladies at court, some of them were writing to save their families from ruin. These background stories are worthy of novels in and of themselves. So, in addition to the Great Jane, I’m drawing on this huge, rich mix of fact and fiction to create my Regency world.

Tell us a bit about Rosalind herself—her personality and what makes her the ideal heroine for your novels.

Rosalind is a member of London’s high society. She’s a bit above Lizzie Bennet on the ladder, but she’s in what gets called “distressed circumstances,” because her father abandoned his family. She’s got no money, so she’s got to make shift to make a living for herself, and she’s become a kind of personal assistant to society ladies. Only, while she was busy arranging a social calendar, she also wound up having to solve a murder.

Rosalind has had opportunities to follow the path expected of young society women during the Regency. What does it tell us about her that she ultimately embraces the moniker of “a useful woman” (and what does that mean)?

I found the concept of “the useful woman,” in a book written in 1826 by (deep breath), Lady Marianna Spencer Stanhope Hudson. It was titled Almack’s. In its day, this book was a huge, scandalous tell-all about a specific group of society women who ran London’s most famous and most exclusive ballroom. It was the place you wanted to go to see and be seen by potential marriage partners. Anyway, in the middle of this book, there’s one paragraph where one character is talking about another and saying “she’s really become such a useful woman.” It’s only a couple of lines. But the idea was that if a single woman had fallen on hard times, her better-off friends would start inviting her to their houses to stay, sometimes for months. In return, she’d do things for them like help with their correspondence, organize their social schedules, make calls for them, and generally make herself useful. In return, she’d get free room and board for the duration of her stay, she’d also get to use the carriage and be invited to all the parties, so she could still be a part of society, even if she couldn’t really afford it. 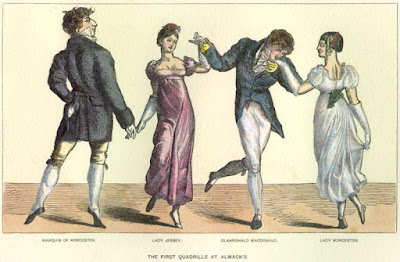 I had never heard of anything like this before, and I immediately said “This is the character I want to write about!” and that was when Rosalind came into being.

Now, Rosalind takes this concept three or four steps further. The problems she helps her ladies with are not only organizing social functions, but things like blackmail, and, of course, murder.

Adam Harkness assists Rosalind in the cases she chooses to take. How would you describe him and his role in the books? What makes him a good partner for Rosalind?

Adam is an officer at the Bow Street police station, so he’s got a lot of investigative experience of his own. But what makes him perfect for Rosalind is he understands and respects her. They also have complimentary freedoms. As a Bow Street “runner,” Adam doesn’t have access to the kind of aristocratic homes and lives Rosalind does, and that can be a real problem if he has to investigate a murder in high society. Rosalind, on the other hand, is limited in her movements simply because she’s a woman, whereas Adam has a lot of freedom, to, say, be out late at night on his own. So, the pair of them have plenty of ways they can each help each other out of (or into) trouble.

Please set up the mystery in this sixth novel. Who is Bethany Douglas, and why does she seek out Rosalind’s services?

Bethany is a distant acquaintance of Rosalind. Beth is happily married to a man from a rich family, but she’s also got a set of extremely problematic relatives; her mother’s a hypochondriac, her father drinks, one sister is relentlessly anti-social, the other ran away with a ne’er-do-well and is now back, claiming that the ne’er-do-well is dead. And as if that wasn’t enough, it now looks like the extremely valuable heirloom necklace her husband’s family gave her as a wedding present has been stolen, possibly by a member of her problematic family. She needs Rosalind to find out what happened to the pearls and get them back without creating any kind of scandal. And from there, things get a little complicated…

There is an implied tip of the hat here to Jane Austen’s Pride and Prejudice, which also supplies the epigraphs to most of the chapters—specifically to the relationship between Lydia and Wickham. What made you want to include that element?

I’d recently rewatched my favorite version of Pride and Prejudice (for the record, it’s the 1995 version with Jennifer Ehle and Colin Firth), and I got to thinking about Lydia and Wickham, and about the fact that it really must have been tough for the younger sisters in the Bennett family. They must have been so tired of always being compared to their entirely amazingly perfect older sisters. As I thought about it, I wondered what would have happened if instead of Lydia just being a silly little girl with no moral compass, Lydia was a schemer, and what if she went to Wickham and they together hatched the plan to run away and blackmail Darcy into paying to get Lydia married or returned home. Okay, in my version, she’d still have no moral compass, but she’d also have some guts, and some smarts. 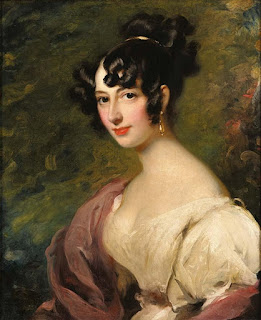 The pearls mentioned in the title are a quite remarkable piece of jewelry. Describe them for us, please.

I love jewelry, so I had a lot of fun creating that necklace. In the Regency, it was pearls, not diamonds, that were considered the most precious gem. The necklace itself is three strings of pearls—two white and one black, with one large drop pearl in a gold and diamond setting as a pendant.

Will Rosalind and Adam continue their adventures? Where can we expect them to go next?

As a matter of fact, I’m just finishing their next book. This time the mystery hits closer to home than their other adventures have, and both Rosalind and Adam will find themselves having to make some very consequential decisions about what they want for their futures, and their relationship.

Thank you for inviting me!

Darcie Wilde is the author of five previous historical mysteries featuring Miss Rosalind Thorne and as many historical romances. Find out more about her at http://www.darciewilderomancecom.

Images: The First Quadrille at Almack’s and Portrait of Princess Dorothea Lieven, a patroness of Almack’s,  wife of a prominent Russian diplomat, and acquaintance of Rosalind Thorne public domain via Wikimedia Commons; portrait of Darcie Wilde © Chris Amos.