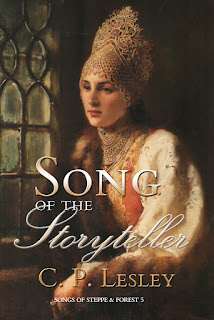 Just about two weeks from now, I will press the button that officially releases my latest Russian novel, Song of the Storyteller, into the world. The book has been ready for a month, but I learned the hard way that late November/early December is not a good time to publish something new. The demands of Christmas shopping slow everything to a crawl, and even purchasing author copies can take five times as long as normal. Not to mention that the general flood of new releases tends to overwhelm those of us who don’t have the luxury of a big publisher with a fully staffed publicity department at our backs.

No, January—when people have recovered from the holiday madness, perhaps received e-devices of some kind as presents, and (at least in my part of the world) are looking at months of chilly days and long, dark evenings—is a much better time to launch a new book. So this post is a prequel of things to come, not an actual announcement.

Some books are fun to write: they flow like mountain water from the fingers onto the screen; their characters cooperate with interesting takes on things and problems that anyone can relate to, naturally sharing their views with the author because that’s who they are. Other novels have to be hauled, howling and protesting (or, more often, squirreling their secrets away like so many October hazelnuts), into the light.

I’ve had a couple of the latter in this series, as well as some of the former. Juliana (Song of the Siren) was desperate to tell her story; I could barely keep up with the flood of information she poured into my head from morning to night. Grusha (Song of the Shaman) and Darya (Song of the Sisters) were the shy sort; for different reasons, it took me a long time to find the strength at the center of each of them and coax it out to a place where I could see it. Solomonida (Song of the Sinner) had a strong character from the beginning, as well as an interesting problem, but complicating her situation enough to create a compelling story took a lot of work.

Then came Lyuba: Lyuba the storyteller, the natural, the heroine I’ve always dreamed of writing. Self-aware even at sixteen, with a fiery temperament offset by her sharp observation of others and of social convention, Lyuba is determined to wrest what she wants from life in the same way as she plots her fairy tales and takes mental notes for the family saga that we know from The Shattered Drum she will one day write. And the situation she faces is both historically real (except for her part in it, of course) and tailor-made for fiction. 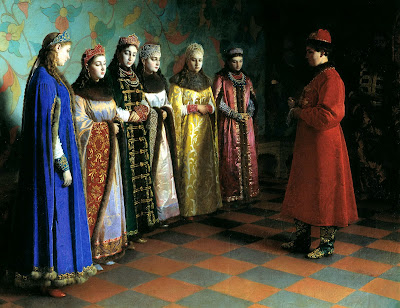 In December 1546, Grand Prince Ivan of Russia (soon to be known as Tsar Ivan the Terrible) decided to marry. He too was sixteen, and for various reasons it was decided that he would select a bride from among his own aristocracy rather than make a diplomatic marriage with a foreign princess. A call went out to all the principalities under Moscow’s control, demanding the nobles present their daughters to the government servitors sent to the provincial towns to make the initial selection. Those girls (we don’t know how many), as well as others representing the great Moscow families, were investigated and gradually winnowed to a small group, from whom Ivan selected a bride. Anyone who has read any of my previous Russian novels can guess that Lyuba’s father would leap at this opportunity like a man-sized salmon.

The summoning of potential brides in itself was not uncommon. Ivan’s father had held such a bride show twice, and later tsars continued the practice until Peter the Great abolished it in the eighteenth century as too medieval and Russian. But what makes it perfect for fiction is that the families who got their girls into the contest took it with deadly seriousness—and I do mean deadly. Candidates were poisoned, girls suddenly developed mysterious ailments that lasted just long enough for them to be given the boot, skeletons were dragged out of closets and shoved back into them. Lyuba and her best friend, Anna, are right to wonder if they will make it out of the Kremlin alive.

And they don’t want any part of the contest. Each of them is in love with a young man she cannot have, and neither has any interest in becoming Russia’s first tsaritsa. And if that seems strange, in a world where so many young girls dream of becoming princesses, well, really, would you want to be the wife of Ivan the Terrible?

I should note that while I was working on the final revisions for this novel, Russia launched its unprovoked invasion of Ukraine. As I write this post, that war continues, and for those of us who have spent our adult lives studying the long and complex history of that region, it feels as if the world has shifted on its axis. Given Russia’s current status as an international pariah, even to write sympathetically about the country’s past in a novel is a source of confusion and doubt. The tragedy of lives lost, infrastructure destroyed, childhoods fractured, injuries inflicted, cold and hunger endured makes Lyuba’s struggles trivial.

But I also know that many Russians are equally horrified by the actions of their government—indeed, many Russians have Ukrainian family members. And that is why I nonetheless hope that my fiction can, if nothing else, reveal some of the political assumptions, historical realities, and beliefs about Russia’s place in the world that continue, even five centuries later, to influence its actions.

Among other things, those actions are based on the lie that Ukraine is, and always has been, a part of Russia. The same justification was given for the annexation of Crimea. But my novels take place at a time when neither Crimea nor Ukraine was considered part of Muscovy. Perhaps that is one contribution they can make to the discussion.

You can find out more about Lyuba’s story at https://www.fivedirectionspress.com/song-of-the-storyteller. Meanwhile, I will be returning my fictional focus to Anna, the center of the next novel and, alas, another of those heroines who requires a gentle touch and lots of patience if she’s to find her way into the light.