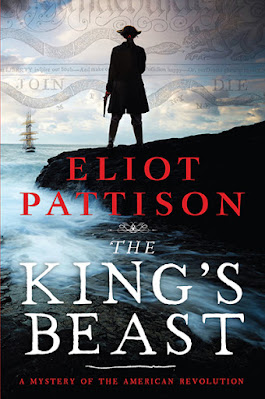 As we get ready to celebrate the birthday of the United States of America—just six years short of its 250th anniversary—it might be good to revisit what came before. On this day, July 2, a group of rebels met in Philadelphia and signed the Declaration of Independence drafted by Thomas Jefferson. (For those who may not know, the signing was made public two days later, which is why Independence Day falls on July 4.)
The discontent among the colonists went back many years. The King’s Beast, the latest installment of Eliot Patterson’s Bone Rattler series, starts in 1769. Duncan McCallum, the hero of the series, has traveled to the Kentucky wilderness on a commission from Benjamin Franklin: to unearth a set of giant bones found in a mud pit and convey said bones to London. But a triple murder at the excavation site leads Duncan along a twisted path of deceit, revenge, and betrayal that affect not only himself but the Sons of Liberty, the underground revolutionary organization to which Duncan belongs.

One of the elements that make Duncan appealing is that he—and several other major characters in the series—have deep ties to the Native American and black (both slave and free) populations. In this sense, although he still considers himself a loyal subject of the English king, he is already occupying a different cultural and emotional space. Unlike many of his compatriots, Duncan and his friends welcome the complexities of that space.

Given the centuries-long history of racism and oppression in this country, which has tarnished the bright dreams of liberty and justice for all, it is reassuring to encounter a hero who understands that it takes more than one kind of person to build a nation. Eliot Pattison was kind enough to answer my questions about Duncan and his world. Please read on to find out more.

This is the sixth novel in your Bone Rattler series. What made you decide to write a mystery series set in the years leading up to the American Revolution?

Americans are alarmingly disconnected from their history, which perhaps is no wonder given the sterile way it is presented in our textbooks and most classrooms. In many ways these years before the outbreak of war were the true period of revolution, for this is the time of our extraordinary shift in self-identity, when the inhabitants of these shores began to think of themselves not as British colonists but as Americans. This was one of the most extraordinary periods of our past, when advancements in education, printing, and science were liberating people like never before. The period offers profound lessons for today, and I am convinced that when done well historical fiction can connect readers with the past much more effectively than any textbook. Reducing the complex humans of our past to shallow soundbites and classroom statistics diminishes ourselves as much as them. We need to grasp that except for differences in technology and material possessions, these people of the eighteenth century shared many of the same ambitions, appetites, frustrations and conflicts that we have today. This series not only allows me to make this vital period more relatable to readers, it offers them hands-on involvement with the birth of our country.

What specifically drew you to the story that became The King’s Beast?

My novels in this series are all built around authentic elements of the period—for example, the Stamp Tax, the repression of the native tribes, slavery, and the legacy of the bloody French and Indian War. This installment draws upon the wave of scientific discovery occurring during this time and the widespread effect of the nonimportation pacts which arose in reaction to London’s repressive restrictions on trade. I immerse myself in research before launching into a novel, and I was amazed at the remarkable events of 1769, including the opening of the Kentucky lands with their fabled bones of a mysterious beast, and the fierce competition between Philadelphia astronomers and the king’s royal scholars over the transit of Venus—all of which become plot elements in The King’s Beast.

Your main character is Duncan McCallum. He’s a Scotsman, an émigré. How did he end up in Pennsylvania, and how would you describe him as a character. What does he want in life?

Duncan McCallum was about to complete his medical education in Edinburgh when he was falsely arrested for supporting Jacobite traitors and put in chains for transportation to America as an indentured servant, effectively a form of slavery that was a common punishment for Scots who offended the government. Duncan is thrust into the frontier of New York and Pennsylvania, in the shadow of the fearsome wilderness, which everyone knows is populated by bloodthirsty savages. Duncan is forced into fearful confrontation with the natives, and to his surprise he finds them to be quite the opposite of the image portrayed in public accounts—in fact they remind him of his own compassionate, spirited Highland relatives. As he faces crisis after crisis, eventually using his skills to solve murders of colonists and natives which would otherwise be ignored by the government, he develops a profound respect for the tribes and begins to experience the unfamiliar freedom that the American lands seem to breed. Despite his legally imposed servitude Duncan cultivates that independence, and eventually experiences the complexities, and burdens, of colonial freedom as he is drawn into the affairs of the Sons of Liberty.

When we meet him in this novel, Duncan is searching for something known to those on his expedition only as the incognitum. Why are they looking for it, and how does their discovery lead to murder?

During the late 1760s accounts of the remains of a mysterious creature in the Kentucky lands are stirring excitement and controversy in both colonial towns and Europe. Benjamin Franklin, now in his long tenure as colonial envoy in London, has devised a plan to use the remains of this incognitum to elevate the colonial cause with the king, if someone can just perform the impossible task of secretly bringing them to him in London. Duncan reluctantly accepts this challenge and only when he arrives at the other-worldly Bone Lick of Kentucky does he discover that clandestine agents from London will stop at nothing, not even murder, to prevent him from getting the bones to Franklin.

In pursuit of the murderers, Duncan heads for Philadelphia, where he reconnects with Sarah Ramsey, the woman he loves. Like Duncan, she has links to the Iroquois, although that is only part of her story. What can you tell us about her?

Like all my primary characters, Sarah Ramsey is an amalgam of authentic figures of the period. The daughter of the wealthy London aristocrat who owns Duncan’s bond of indenture, Sarah was captured as a young girl and raised by the Iroquois, then in her late teen years was forced against her will to return to European society—reflecting the actual experience of a number of captives. Like Duncan, Sarah is fiercely independent. The two resist the forces of British society, and as they help each other recalibrate their lives their affection for one another grows. She forces her father to surrender Duncan’s ownership to herself and together they start building the community of Edentown, a frontier refuge for orphans and outcasts. Sarah remains deeply loyal to the Iroquois but, like Duncan, is drawn into the cause of American independence, hoping that driving out the British government will help preserve the tribes. By the time of this sixth installment Sarah has taken on a leadership role in the nonimportation resistance movement, a role so secret that not even Duncan knows of it—until he learns that she too has been targeted for death by spymasters in London.

Duncan belongs to the Sons of Liberty. What does that mean in 1769, and what does it have to do with Duncan’s journey to London?

Although the Sons of Liberty were formed to oppose the Stamp Tax of 1765, as London imposed new repressive measures on the colonies, the Sons revived and by 1769 were coordinating across colonial borders to advance their goals. Duncan has served as a secret emissary of the Sons on the frontier and is valued for his knowledge of the wilderness and the tribes. When Benjamin Franklin cryptically requests that the Sons retrieve the ancient bones for the colonial cause in London, Duncan is their obvious choice. Little does he know that this path will lead to murder and mayhem, and mark him for death.


This book came out in early April. Are you already working on something new?

There will be a seventh book in the series, set in the tumultuous year of 1770, when the Boston Massacre occurs. Meanwhile I am working on a new, more contemporary series. 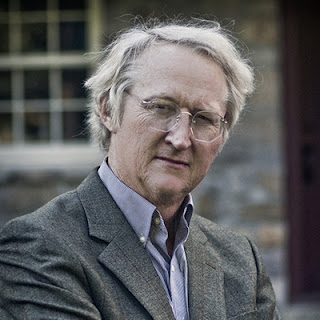 An international lawyer by training, Pattison is the author of the Inspector Shan series, which includes ten novels—beginning with the award-winning The Skull Mantra. His longtime interest in eighteenth-century America, including its woodland tribes, gave rise to his Bone Rattler series, of which The King’s Beast is the sixth installment. Ashes of the Earth, a stand-alone post-apocalyptic mystery, appeared in 2011. He resides on an eighteenth-century farm in Pennsylvania with his wife, son and an ever-expanding menagerie of animals. Learn more about him at http://www.eliotpattison.com.
Image credit: Jerry Bauer.