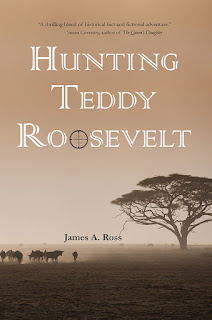 I’ve been conducting a lot of author interviews recently, the happy result of having been offered more good books than I can reasonably fit into my podcast schedule. Today I’m featuring James Ross, whose historical novel Hunting Teddy Roosevelt is due for release at the end of July. It’s not exactly a mystery, in that we learn the identity of the intended killer and the reasons behind the assassination attempt against the former US president early on: the unknowns are rather how the crime will take place, if it does—and, since this is a novel instead of a history book—whether the would-be assassin will succeed.

There are contemporary overlaps to Ross’s story as well. Teddy Roosevelt’s decision to wipe out as much African wildlife as possible for the sake of the Smithsonian Institute and New York’s Natural History Museum now seems both ecologically disastrous and (unwittingly) offensive in its approach to what we now call the Third World. And as we discuss at the end of the interview, in the wake of the recent protests in the United States, the same Natural History Museum has removed its commemorative statue to Roosevelt because of its colonialist elements.

But the only way to overcome the shortcomings of our past is to face them, and the fact that these problems continue to exist in our present make this novel even more of a necessary and compelling read. So read on to find out more. Some of the answers may surprise you.

You have an interesting history. How did you come to write fiction?

I wrote my first book in college. I’m publishing my first one, Hunting Teddy Roosevelt, the same year I start to collect social security. It’s been a long haul. One of the reasons it took so long is that the common (and often only) advice given to new writers when I was starting out was to follow Hemingway's dictum: “Begin with one true sentence.” I did and, over the next decade, wrote a trunk full of manuscripts before realizing that without plot, characterization, drama, and other fundamentals of good storytelling, several hundred pages of true sentences are unreadable and unpublishable. Fortunately, and with the help of an excellent writing group called NovelPro, I finally learned the basic blocking and tackling of fiction and have made steady progress since then.

And what made you want to tell a story about Teddy Roosevelt, especially in the year after he stepped down from the presidency?

Quite by accident, I came across a 1909 Italian newspaper that contained an account of the arrest of an anarchist who had allegedly attacked Roosevelt with a knife while he was traveling by ship to Europe on his way to Africa. Today, we’re all too familiar with attempts to kill office seekers and office holders, but in 1909 Roosevelt was out of power and on his way to a part of the world that routinely killed 80% or more of the reckless adventurers who went off to challenge its jungles and deserts. So this obscure Italian newspaper account of a shipboard attempt on Roosevelt’s life raised some interesting questions. Among them: Why would someone go to the trouble of trying to kill an ex-office holder on his way to some place that was likely to kill him anyway? Who would do it? And how did an attempt to kill Teddy Roosevelt not make it into any American newspaper, history book, or Roosevelt biography? Was the story suppressed? And if so, by whom and how?

Hunting Teddy Roosevelt is a fictional attempt to answer these questions. And while I’m not a historian, I hope my book gives professional historians a decent head start on an intriguing mystery.

Why has Roosevelt gone to Africa, and what is he leaving behind?

Honoring George Washington’s precedent of declining to run for a third consecutive term, Roosevelt left office in March 1909 and turned the presidency over to his successor, William Howard Taft, with the promise to stay out of the public eye for a year to give Taft a chance to be his own man. To keep that promise, Roosevelt left America to lead the largest African safari ever assembled: 260 men and 20 tons of supplies and equipment, with the objective of gathering specimens of African game animals for the Smithsonian and New York Museum of Natural History.

Unknown to Roosevelt, the Smithsonian raised much of the safari’s funding from J. P. Morgan, the richest private citizen of that era. Morgan was happy to underwrite the cost of keeping Roosevelt out of the country for a year if that would give him time to work with the more business-savvy Taft administration to undo Roosevelt’s anti-business legislation. Morgan’s toast on TR’s departure was a pithy (and revealing): “America expects every lion to do its duty.”

Roosevelt was a larger-than-life character in an age that spawned more than its share: hero of the Spanish American War for leading a band of Badlands cowboys on a daring cavalry charge up San Juan Hill, Cuba; police commissioner of the City of New York, responsible for ending rampant police corruption and breaking the grip of Tammany Hall on New York politics; at age forty-three, the youngest president of the United States—who dismantled monopolies in railroad, oil, and other industries; won the Nobel Peace Prize for brokering an end to the Russo-Japanese War; and used a “speak softly but carry a big stick” foreign policy to ignite a revolution in Panama that secured for the United States the right to build a canal linking the Atlantic and Pacific oceans.

But Roosevelt’s aggressive style and controversial accomplishments created enemies as well as admirers, and first among them was J. P. Morgan. Morgan blamed Roosevelt’s assault on business monopolies (then known as trusts) for triggering the stock market panic of 1907 that nearly destroyed the country’s financial system. The Federal Reserve Bank did not then exist, and only Morgan’s daring use of his entire personal fortune to prop up the largest failing banks saved the country from financial collapse. The US economy had become as strong as any in Europe, but it was vulnerable to periodic booms and busts. Morgan’s view was that if the country was to realize the promise of its natural advantages, it must have modern and efficient business structures: a national bank, a national railroad, and an end to wasteful competition in basic commodities. Europe was once again headed toward war, and if America could avoid entanglement, it would have a chance to fulfill its destiny as the dominant global power with all the attendant rewards. But only if it could get its economic house in order; and only if that madman, Teddy Roosevelt, could be kept permanently away from the throttles of power.

Somewhere in that mix is the answer to the questions of who, why, and how?

On the trip, he runs into a childhood sweetheart—indeed, his first love, Maggie Dunn, an intrepid newspaper reporter who reminded me of Nellie Bly. What causes her to accept this assignment?

Maggie is a serious journalist, and she wants to cover serious stories—like the resurgence of slavery in the Sudan, Belgian colonial atrocities in the Congo, and German preparations for war in East Africa. But she has to make a living. To do that, she takes on an assignment for the sensationalist Hearst newspapers (the Fox News/National Enquirer of its time) to cover the colorful ex-president’s gargantuan safari as a means of getting her to Africa and paying her expenses while she pursues her serious journalism.

And what can you tell us about Jimmy Dooley?

Jimmy Dooley is a fictional character, loosely based on my paternal grandfather, an uneducated Irish tough who lived by his wits in the hardscrabble environment of turn-of-the-century New York. He had a brief career as a professional boxer, fighting under the name Tiger Ross. I only knew him later in life, but even in his 70s, he was as hard as a floor, with lean, ropy muscles and a permanent scowl. If he told you to hand over your wallet, you’d do it fast, no questions asked.

Teddy Roosevelt has been in the news lately because of the New York Museum of Natural History’s decision to take down his statue. Do you see any connection between this decision and your novel?

If Teddy Roosevelt was alive today, he’d help pull down that statue. He hated the idea of monuments to politicians. In fact, it was his expressed wish (ignored after his death) that no statue or other monument be erected of him. The one outside the New York Museum of Natural History is appalling: TR astride a whacking great horse with supplicant African and Native Americans below. TR would have been outraged and embarrassed.

Yes! I’ve just signed a three-book contract with the mystery publisher Level Best Books. The first novel, Coldwater Revenge, is about two brothers involved with the same woman and the problems that ensue when they discover she’s a murderess and one brother begins to suspect the other of helping her cover it up. It’s due out in April 2022. The second and third books in the series should come out in April 2023 an 2024, respectively. 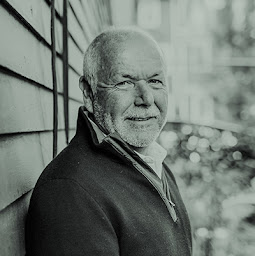 James Ross has been at various times a Peace Corps volunteer, a Congressional staffer, and a Wall Street lawyer. His short fiction has appeared in numerous literary publications, he has appeared as a guest storyteller on the Moth Main Stage, and his short story “Aux Secours” has been nominated for a Pushcart Prize. He is a frequent contributor to, and occasional winner of, the Jackson, Wyoming, live storytelling competition, Cabin Fever Story Slam. Find out more about him at http://jamesrossauthor.com.