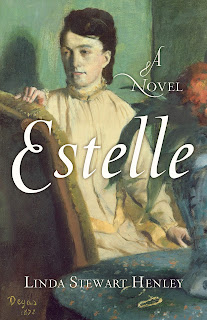 A run-down house, an old diary offering insights into late nineteenth-century social life, a boyfriend with secrets, and a young heroine graduating from college on the brink of the Second Wave of the Women’s Liberation Movement, in a decade almost as dramatic as our present—these ingredients intertwine with the historically attested but little-known story of the painter Edgar Degas’s visit with the New Orleans branch of his family in Linda Stewart Henley’s sparkling debut novel Estelle.

In our New Books Network interview, Henley reveals how she found out about Degas’s journey and researched his family relationships. We also talk about how she became a fiction writer, why she added the more contemporary angle, how New Orleans itself has changed over time, and what made this short period in Degas’s life so crucial to his development as an artist. So read on to get a sense of the story, then listen to the interview.

Most people think of Edgar Degas as a French painter of ballerinas. But few have heard that his mother came from New Orleans or that he spent five months in the city between October 1872 and February 1873. That five-month period proved crucial to Degas’s career, moving him from the status of a relative unknown dabbling in the not-quite-respectable world of the Paris Opera into an artist of renown. And although he went back to painting ballerinas—many of his most famous works date from 1873 and later—it was his study of his brothers, A Cotton Office in New Orleans, that won him the critical acclaim that pushed him into the next stage of his career. 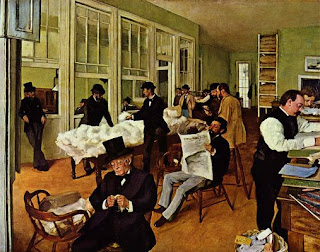 In Estelle (She Writes Press, 2020), Linda Stewart Henley takes this vital transition as her starting point for a dual-time story in which a young woman named Anne Gautier, twenty-two years old and fresh out of college, inherits an old house on Esplanade Avenue in New Orleans in 1970. While overseeing renovations and dealing with protestors opposed to urban renewal that displaces the poor, Anne discovers an old journal that sheds light on Degas, his friends and family and sojourn in the city—in a house just down the street from hers. Her attempts to uncover more information reveal mysteries both personal and artistic, and soon Anne must tackle some very basic questions regarding what she wants from life.

Interspersed with Anne’s story is the narrative of Degas’s sister-in-law, the Estelle of the title, as she welcomes her visiting brother-in-law and observes his adjustment to family life. Estelle has troubles of her own: she’s pregnant with her third child, she’s losing her eyesight, and her marriage suffers as the family cotton business struggles to stay afloat in the aftermath of the US Civil War. Yet she perseveres, and these relatively quiet domestic scenes contrast well with Anne’s more dramatic conflicts and with the occasional diary entries reproduced from the journal Anne has discovered. The end result is a thoroughly enjoyable tale of the changing fortunes of a great city and the life of an artist, told through the perspectives of three women governed by expectations that are in some ways quite similar, although the options available to them are not similar at all.