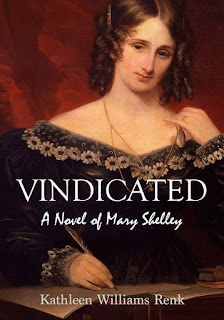 I’ve always admired writers who tackle real historical personages in their fiction. For myself, I avoid really-existing (to borrow a phrase) people in my novels, although at times I have no choice but to bring them in. Even then, I’m careful to emphasize that the records from sixteenth-century Russia—when the vast majority of the population and even a segment of the elite had no formal education and could not read or write—are so scanty and tendentious that only the actions of my historical characters have any basis in fact. Their personalities, appearances, and talents are as much my invention as those of my wholly fictional people.

Fortunately, Kathleen Williams Renk—my latest interview guest on New Books in Historical Fiction—doesn’t share my qualms. She dives into the lives of Mary Godwin Shelley, her lover and eventual husband Percy Bysshe Shelley, and their combined families and friends without hesitation. The result, expressed through a journal written by Mary Shelley, not only pulls us into the literary world of nineteenth-century Romanticism but illuminates the threads that wove together to produce one of the Western world’s great Gothic tales—Frankenstein. And she does it all in two hundred pages of lucid, enthralling prose.

Mary Godwin Shelley had yet to reach her nineteenth birthday when she had the dream that gave rise to the classic Gothic horror tale Frankenstein. The daughter of a dissenting English clergyman and Britain’s first feminist, Mary Wollstonecraft, Mary Godwin lost her mother not long after her birth. After an unconventional upbringing by the standards of late eighteenth-century Europe, followed by the arrival of a very conventional and far from accommodating stepmother, at the age of fourteen Mary fell madly in love with the poet Percy Bysshe Shelley. Two years later, they eloped to Europe, leaving behind Percy’s wife and child but bringing along Mary’s stepsister, Claire.

For the next decade, the trio traveled around the continent—especially France, Switzerland, and Italy—with occasional returns to London to secure funds. Through trips over the Alps by mule, sailing expeditions on Lake Como, and wild parties thrown by Lord Byron—a misogynist who belittles Mary’s talents even as he engages in a wild affair with Claire—Mary records in her journal the events and experiences that will blossom into her first and best-known novel.

In Vindicated (Cuidono Press, 2020) Kathleen Williams Renk re-creates Mary’s inner world. Her crisp, utterly compelling prose brings to life a woman whose creation, as in the novel Frankenstein itself, has taken on a life of its own, eclipsing its creator.