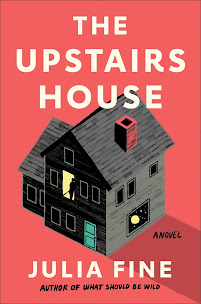 When Julia Fine’s publicist at HarperCollins first approached me with a pitch for an interview, I demurred. I had a lot of books on my plate already; I knew Fine’s first novel was classified as fantasy—not a genre I seek out; and the main subject of this new book, The Upstairs House, seemed to be a contemporary young mother struggling with the reality of adjusting to a newborn infant in her life.

Not that I couldn’t sympathize with the young mother’s plight; every woman who bears a child has to confront the clash between expectations and a kind of craziness compounded from sleepless nights, a body that feels as if it’s taken on a life of its own, and overwhelming love for a demanding and utterly dependent infant (or, worse, the absence of overwhelming love because of the demands and dependency). When I went through that, I was lucky to have had more help at home than Julia Fine’s Megan Weiler and a more adaptive body chemistry; for whatever reason, I suffered less. Even so, I was in no hurry to revisit that part of my life through someone else’s eyes.

But the second part of the story, involving Margaret Wise Brown and Michael Strange, kept tugging at me, and in the end I became caught up in the book, which is a fast and enjoyable read. I drew up these questions, and Julia Fine was kind enough to answer them. Read on to find out more.

And don’t miss her interview with Gabrielle Mathieu for New Books in Fantasy, where they discuss What Should Be Wild.

This is your second novel. People who’d like to know more about your first, What Should Be Wild, can learn about it through your podcast interview with Gabrielle Mathieu, the host of New Books in Fantasy. But could you give us a summary of that story’s theme?

What Should Be Wild is a modern fairy tale about a girl who has the power to kill and revive with the touch of her skin. She’s been confined to her ancestral family home her whole life, and the book follows her as she ventures out into the world on her own for the first time. It’s also the story of the women in her family who, dating back thousands of years, found themselves constrained by society and in need of escape. I’m very interested in how women historically do or don’t break out of prescribed gender roles, which is a theme that reappears in The Upstairs House.

The new novel, The Upstairs House, which will just have come out when this Q&A goes live, might be considered a mix of contemporary psychological suspense and historical fiction. What drew you to tell this tale in this particular way?

The psychological suspense comes from my interest in exploring the immediate postpartum period. After having my first baby, I was struck by how much intrinsic tension there was in those first few weeks as a new mother. It’s a time when your life is totally turned upside down, you’re sleeping odd hours (if at all), there’s an intense loneliness and a sense of the uncanny. I wanted to write a book that leaned into that discomfort.

And of course, almost every new parent knows Goodnight, Moon. Margaret Wise Brown lived such an interesting, unexpected life—she was a fascinating character, and it only seemed right to do her justice in fiction.

Tell us about Megan Weiler, your protagonist. Who is she, and what drives her?

Megan is a new mom who has set aside her dissertation on mid-century children’s literature to have a baby. Her husband travels a lot for work, so she’s basically parenting her newborn alone. She’s got a lot of lingering family tension, and not much faith in herself as a parent.

Early on, Megan perceives a turquoise door between her apartment and the roof that no one around her admits to seeing. When Megan opens the door, it becomes a gateway to the 1940s, via the well-known and much beloved children’s book writer Margaret Wise Brown—author of Goodnight, Moon and The Runaway Bunny, among other works.

Why focus on Brown, and what should we know about her?

I came to Margaret Wise Brown after reading Goodnight, Moon to my firstborn basically every night for a year. When I started to look into her, I was shocked by how different she was from what I had imagined. She was a bisexual rabbit hunter who never had children, and she died at forty-two. She was enigmatic and glamorous and lonely—as soon as I started reading her biography, I knew I wanted to write about her.

Brown tells Megan right away that she is building a house for Michael, whom Megan soon discovers is the female poet Michael Strange. What can you tell us about Michael’s (historical) story and her relationship with Margaret Wise Brown?

Michael Strange was born wealthy during the Gilded Age—she had family connections to European royalty and had married into another well-to-do family when she decided she wanted to be a poet and adopted her pen name. She went on to marry two more times—her second husband was the actor John Barrymore—and though her literary and dramatic career didn’t stand the test of time, in her day she was rather well known. She was a force—a charismatic, demanding woman who could be equally charming and cruel. She was twenty years older than Margaret and began in the role of mentor before becoming Margaret’s lover. They had a ten-year, rather tempestuous relationship that only ended when Michael died.

We can’t go too far into this story without revealing spoilers, but tell us a bit about Megan’s family—especially her husband, Ben, and the state of their marriage when the novel opens.

Megan’s family history definitely impacts the way she approaches motherhood and marriage. I’m very interested in how we inherit trauma from our families—Megan grows up without role models, and this impacts everyone in her life.

I have a few ideas in the works, but nothing concrete yet!

Julia Fine is the author of the critically acclaimed What Should Be Wild, which was shortlisted for the Bram Stoker Superior First Novel Award and the Chicago Review of Books Award. She teaches writing in Chicago, where she is a core faculty member at StoryStudio Chicago. Find out more about her and her books at http://www.julia-fine.com.