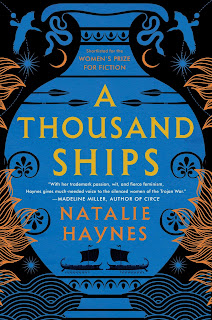 The Iliad and The Odyssey—those great male-dominated, war-oriented epics attributed to Homer and now close to three thousand years old—have became so intertwined with Western culture that it is hard to imagine a world without them. Who cannot recall Homer’s “wine-dark sea” or recognize the Cyclops and sirens, golden apples and Helen’s “face that launched a thousand ships” (a quotation not from the original but from Christopher Marlowe) that were the products of his imagination? Who hasn’t heard of the Trojan horse, now a reference to a type of computer malware?

But the Trojan War was more than a pair of epics that managed to survive for millennia or even a series of cultural tropes. In its time, it was a far-reaching catastrophe that ended and upended lives. And it affected not only warriors bent on securing eternal glory but wives and mothers, children and servants. Natalie Haynes, in her new novel A Thousand Ships, explores this Trojan War through the experiences of the goddesses, princesses, Amazons, townswomen, and captives who in some cases drove it forward and in others suffered the consequences. Read on to find out more.

A Thousand Ships is your third novel, but even beyond the novels you have a “presence,” for lack of a better word, in Classical Greek Studies, including a BBC4 radio broadcast and two nonfiction books. What drew you first to this aspect of literature and history and then to writing fiction about it?

Yes, I have made six series of a radio show for BBC Radio 4, called Natalie Haynes Stands Up for the Classics. I think people were pretty surprised it found an audience, but we get about 1.6 million listeners per episode (my country is a lot smaller than yours!). And now it’s available as a podcast, and has found a whole new audience there, which is wonderful.

I have been a classics nerd since I was eleven, when I started learning Latin. Then I began studying Ancient Greek aged fourteen. I was really lucky that my high school had these options: most students don’t get that opportunity. I did my degree in Classics at Cambridge. So ancient history and myth grabbed me at a very young age and have never really let me go. It took me a while to get around to writing fiction about it—I spent twelve years as a stand-up comedian first, which I know isn’t the obvious route into writing fiction set in the Bronze Age. But it has made it fun to tour a live show off the back of each book.

And why retell the Trojan War from a woman’s perspective—or, more accurately, many women’s perspectives? This decision, too, has classical precedents, including Euripides’ The Trojan Women.

I had already told the story of another Greek myth from the perspectives of two of its women in a novel called The Children of Jocasta. I love Greek tragedy, and I wanted to retell the story of Thebes (whose most famous son/husband/father is Oedipus) and see what happened if I shifted the focus to its women. But that is a much more focused narrative. I’d been building up to doing the Trojan War for a while before I began A Thousand Ships, I think. I wanted to take on a big story, an epic, with a huge cast of characters, like having a whole set of tragedies in play at once. I was certain the war could be told through the eyes of the women whose lives it affected (not least because it is goddesses, over and over again, who cause and dictate the direction of the war).

I had written and spoken about Euripides for years before I really thought about how extraordinary it is that all but one of his Trojan War tragedies have women as the title characters. We’re used to thinking of war narrative as male-focused, because they so often are (ever since Homer’s Iliad). But Euripides realized that the drama of war (because he was writing plays, rather than epic poetry, so that was his focus) is not always on the battlefield: it’s also in the build-up to a war, or the aftermath of one. It’s where the women are. If he knew that 2,500 years ago, it’s odd that we forgot it. But I felt like we had.

Is there one character who particularly stands out for you?

I love Cassandra. I think she suffers one of the cruelest fates in Greek myth—cursed to see the future but never to be believed. She’s so isolated, because her future is so terrible: her city, Troy, will fall to an invading force; many of her relatives will be killed or enslaved; she herself will meet a woman with murder on her mind (I’m not saying any more in case I spoil it for readers!). So the future she sees is incredibly bleak and terrifying, but there is no one she can speak to about it, because no one believes her. She must have felt mad—like those awful dreams where you’re talking but no one can hear you or understand you. And yet, of course, she was completely, horrifyingly sane.

Cassandra always feels like a woman out of time to me—trying to tell people what to do to save themselves, but helpless to stop them from careening toward their own destinies. I often feel like her, to be honest.

The women of Troy, whatever their standing before the city’s defeat, face an uncertain and uninviting future. Why is that?

The sack of a city in the ancient Greek world was usually brutal. The standard response was to kill all the men and enslave the women and children. You could wipe out a whole culture with incredible ease—kill a city’s men, take its women and children away, repopulate the city with your own settlers. The women would be divided up among their conquerors, so separated from one another. How long can we imagine it would be before an enslaved Trojan woman learned to speak Greek because there was no one for a hundred miles in any direction of her new home who spoke anything else? How long before she forgot her own language or dialect? As Euripides shows us in his play The Trojan Women, even the women of the royal house of Troy end up waiting around to be chosen and taken away by the same Greek warriors who had killed their husbands and fathers and sons. Their powerlessness is devastating to witness. Although his play Hecabe shows that sometimes women with no agency at all can nonetheless engineer one of the most grisly revenges in all of Greek tragedy.

Not all the women whose points of view are included in A Thousand Ships actually went to Troy. Clytemnestra appears, as does Penelope. What perspective do they add?

With this book, I wanted to tell the story of the whole Trojan War, not just one side of it. So there are chapters from the perspectives of the goddesses who want the war to happen, as well as from the mortal women whose lives it destroys. There are chapters focusing on the Trojan women who lose their city and the Greek women who lose their husbands to the war (temporarily or permanently, in some cases: not all the Greeks come home, after all). There is a chapter for Penthesilea, the great Amazon warrior who fought at Troy. There are chapters in the voice of Calliope, the muse of epic poetry, who is responsible for all these large-scale war stories. The war is focused on one city, but what happens there ripples across the whole Greek world. I wanted to tell it in such a way that the reader would see that a war like this has no winners, really. It’s not a game.

Without giving away the endings—plural, since each woman has her own—what in particular about Andromache made you decide to end with her? (Do briefly identify her, for the sake of our readers.)

I’m not sure I can answer this without giving away the ending! Andromache is the wife of Hector, who is the favorite son of Priam and Hecabe, the king and queen of Troy. Hector is the city’s great defender, but there is an extraordinary moment in book 6 of Homer’s Iliad where his wife tells him that he needs to be more careful when he fights, take fewer risks, etc. He rejects her advice (though the whole conversation is beautiful—loving, respectful, full of care for one another and their city, and the people who depend on Hector to defend them). As the poem plays out, her advice turns out to have been painfully true: Hector feels he has to disregard it, but everything she fears will happen does then occur. Andromache has one of the most awful experiences of any of the Trojan women, and it was extremely painful to write the scene where that happens. But in the end, she finds a sort of peace, and I wanted the novel to end on a more hopeful, bittersweet note. So she gets to finish it.

And what comes next—another novel?

I have a nonfiction book, Pandora’s Jar, also coming out with Harper Collins in 2022, I think. But it’s already out in the UK, so that can only mean one thing: I am late starting the next novel. Which tells the story of Medusa, one of the very first survivors of sexual assault to be monstered (literally and metaphorically). The planning is going ok so far, but I need to get writing; my fingers are getting itchy … 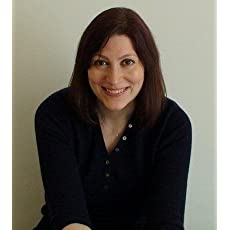 Natalie Haynes is a writer and broadcaster. She has published three novels: The Amber Fury, The Children of Jocasta, and A Thousand Ships, as well as the nonfiction studies Pandora’s Jar: Women in the Greek Myths and The Ancient Guide to Modern Life. She has spoken on the modern relevance of the classical world on three continents, from Cambridge to Chicago to Auckland.

She writes for The Guardian and is a regular contributor to BBC Radio 4, including through her show, Natalie Haynes Stands Up for the Classics. Find out more about her and her books at https://www.nataliehaynes.com.