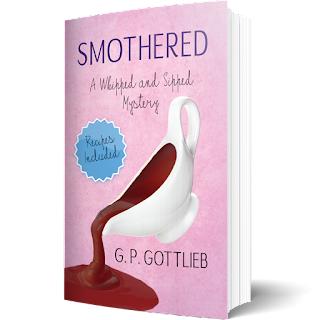 Last year, I interviewed G.P. Gottlieb, the host of New Books in Literature, about her debut novel, Battered: A Whipped & Sipped Mystery. You can hear that podcast conversation on the New Books Network.

With the release of book 2, Smothered, we decided to go with a written Q&A instead. Mystery series are difficult to cover in depth, because basic setup in later books may give away crucial plot points in earlier ones. Those spoilers can be more easily avoided in the shorter format of a blog post.

But don’t be misled by the change of format. Smothered is, if anything, an even more compelling read than its predecessor—and not only because of the murder that lies at its heart. Alene Baron, the heroine, is not a professional detective; her life revolves around her café and her family at least as much as the hunt for a killer. So even if you prefer to read about delicious vegan recipes, this can be a novel for you.

This is the second of your Whipped & Sipped mysteries. People who’d like to know more about the first, Battered, can learn about it through your podcast interview with me on New Books in Literature. Why did you decide to center a mystery series on a café owner/chef?

To start with, I adore a good café! One of my favorite ways to meet friends (pre-pandemic, that is) is at one of the city’s many cafés for lunch or afternoon tea (with something delicious to nibble on, of course). Even more delightful when it’s a warm afternoon, and we can sit outside watching passersby. Who knows which of them might be planning a crime…

How would you describe Alene Baron, owner of the Whipped & Sipped Café, as a personality? What are her issues, and what pulls her into solving the mysteries you create for her?

Alene was a lot of fun to write about. She’s a solid citizen, always trying to help other people and concerned about family, friends, and community. She works long hours at the café, and then at home taking care of her father and children, so she’s a little wound up. She wishes she could be less suspicious and more kind-spirited, like her best friend, the pastry chef, but her suspicions draw her into solving the mystery.

Alene has a romantic relationship—still at a very early stage in Smothered—with Frank Shaw. What do we need to know about him?

Frank is a solid citizen. We won’t know more about his background until book 3 or 4 in the series, but we know that he’s divorced with two young adult children. Alene is falling in love: she’s been a single mother for eight years, and Frank is thoughtful, kind, and sweet-tempered. Plus her kids like him! Is it useful to know that he’s square-jawed, dark-haired, and has a dimple when he smiles?

Whipped & Sipped is a series of murder mysteries. Set up the crime in Smothered for us. What happens, and why does Alene get involved in solving it?

Alene’s neighbor, both at work and in her building, is an unpleasant character. Alene is outside in the alley when he’s found collapsed in his office and assumes that he died of a heart attack. When it becomes clear that he was murdered and one of Alene’s employees is unjustifiably considered as a prime suspect, she knows she has to get involved.

Without giving away spoilers, sketch some of the main suspects for us, including the reasons Alene includes them on her list.

Alene suspects one of the victim’s employees (who found the body), the victim’s son (who recently moved back to Chicago and is asking about his father’s will), the victim’s wife (a lonely, unloved hypochondriac who spends much of the book annoying people from her hospital bed), and the victim’s stepdaughter-in-law (who was once sexually assaulted by the victim). As is her custom, Alene also briefly suspects nearly everyone who crosses her path, but she quickly sets aside those suspicions.

One of the things I love about this series is that the stories are as much about Alene’s family and relationships with the people who work for her as they are about murders and suspects. For a heroine who is not a detective, this seems very realistic to me. What are the main non-crime-related problems that Alene faces in Smothered?

Alene worries about her children and is concerned about what her immature ex-husband is conveying to them. She’s saddened by her lack of a relationship with her younger sister, who scarcely finds time to visit their father when his autoimmune disease flares and he’s rushed to the hospital. She’s a concerned mama hen about the lives and life choices of some of her employees. She’s also worried about growing old alone, and cautiously hopeful about her budding relationship with Frank, the charming homicide detective.

This book has just come out. Are you already working on a third Whipped & Sipped mystery?

I am indeed! I’ve started a first draft of what I think will be Crushed: A Whipped and Sipped Mystery Book 3. When I begin writing a new novel, I like to write the story as if I’m telling it to myself. It’s filled with question marks and convoluted passages, winding paragraphs and indecipherable shorthand notes. I add bits and pieces every day, or I change my mind about who the murderer is, and why it happened. Then I think of that person’s backstory, and how he/she is connected to the café. And when I start thinking too much about recipes, I know it’s time to stop for lunch. 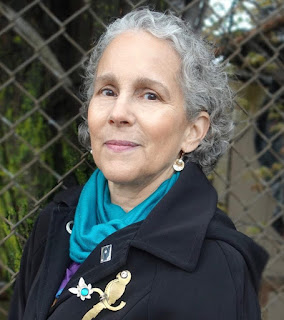 G.P. Gottlieb holds undergraduate and graduate degrees in piano and voice. Over the years, she performed, taught, composed, and administrated while writing stories, songs, and several unwieldy manuscripts. She also fed her family and developed lots of healthful recipes. After recovering from breast cancer, she turned to writing in earnest, melding her two loves, nourishment for mind and body and recipe-laced murder mysteries. She hosts New Books in Literature, a podcast channel on the New Books Network. Smothered is her second novel. Find out more about her and her books at http://www.gpgottlieb.com.