Yes, I know, it’s only six weeks since the last bookshelf post. But with the pandemic dragging on and spring finally on the horizon, I have lots of time to read and a new reason to record the latest set of books.

As you’ll see, for some reason I’ve been reading a lot of historical murder mysteries lately. But despite varying degrees of gore, none of these books is only a puzzle about who killed whom. What makes them memorable is a combination of richly envisioned historical settings, complex characters, and stories that have more to do with tangled networks of interpersonal connections than the specific circumstances that lead one person—sometimes the least interesting in the book—to tackle his or her problems with so unimaginative a solution as murder. So with that said, here we go—as usual, in alphabetical order by author.

Anne Louise Bannon, Death of the City Marshal
(Robin Goodfellow, 2019)
I ran across this author on social media and purchased the first book in the series, Death of the Zanjero, out of curiosity. I don’t know too many books set in Los Angeles when it was still little more than a pueblo (ca. 1870—yes, California is young!), and the main character sounded interesting. I soon found myself rooting for the heroine—Maddie Wilcox, a widowed winemaker with medical skills. And I thoroughly enjoyed the twisty plot—which revolves around the murder of a water overseer (zanjero) whom almost everyone in town, including Maddie herself, has reason to want out of the way. In this second novel, the victim is Maddie’s self-appointed nemesis from the first book, so I can’t wait to find out what’s happened to him. 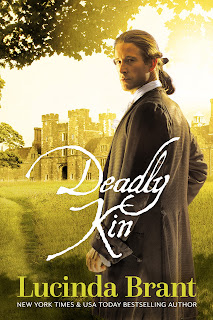 Lucinda Brant, Deadly Kin (Sprigleaf, 2019)
Another book acquired more or less by chance, through an Amazon recommendation. The time period—Georgian England, in this case not long before the American Revolution—hooked me, because it’s the era when my favorite Georgette Heyer novels take place. So I downloaded and read the first one, Deadly Engagement. The author really knows her stuff, and I was impressed both by her grasp of historical detail and her richly layered characters.

These books explore deep and often disturbing themes of eighteenth-century (and modern) family life: spousal abuse, infidelity, rape, incest, and the complicated effects of primogeniture and its absence, to name a few. That’s in addition to the usual motives of greed, revenge, and mental imbalance. I’m planning to interview the author for New Books in Historical Fiction in early summer, so stand by for more information when that podcast episode goes live. 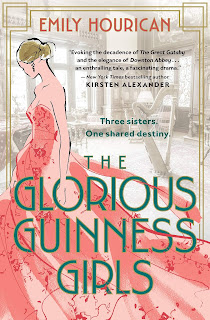 This one came to me by way of a publicist, but because I was already booked for May and June, it’s been shifted to a written Q&A on this blog. The three daughters of Ernest Guiness (the beer guy), all blonde and blue-eyed, were a sensation in 1920s London society. Here Hourican explores their childhood and youth through the eyes of a fictional heroine—Felicity, known as Fliss—who is brought into the family at the age of ten. She experiences herself as somewhere between a charity case and an unpaid servant, but sharp and observant, she makes the perfect narrator for this tale of Anglo-Irish wealth, threatened by an emerging Catholic drive for independence, and the restlessness that drove the Roaring Twenties, a response to the devastation of the Great War.

Hourican, a former journalist and editor, has a keen appreciation of social and political conflict and a clear, compassionate writing style. Come back next month to see her answers to my questions. 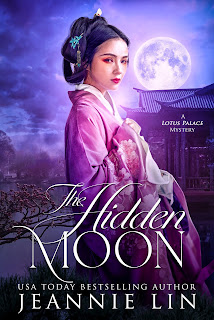 This self-published author hit the jackpot when one of the New York Times Book Review contributors picked her Jade Temptress for a historical fiction column. I read book 1, The Lotus Palace, and have almost finished The Jade Temptress (now snapped up by Harlequin). So I look forward to this one. Set in Tang Dynasty China (late ninth century), the series follows the adventures of two women, Yue-ying and Mingyu, who live in the Pingkang li, the notorious pleasure quarter of the then-capital of China, Changan. Mingyu, a high-ranking courtesan, falls under suspicion of murder in the first book; her maid, Yue-ying, and a handsome lord, Bai Huang, work together to solve the crime. They fall in love, but marriage is impossible because of the difference in their status and Lord Bai's prior contract. Or is it?

Despite her popularity and the wealth she earns, Mingyu cannot leave the quarter because she is owned by her “foster mother,” the woman who runs the Lotus Palace. In The Jade Temptress, Mingyu receives a summons to the house of her protector, where she finds him headless, so recently killed that the blood is still wet. Only the constable she detests from book 1 can help her clear her name.

This third novel features Bai Huang’s younger sister, Wei-wei, and a criminal associate of Lord Bai’s who, if the previous books are anything to go by, will almost certainly turn out to be more than he seems. But what I like about these novels is not the murders themselves, interesting and revealing of Tang Dynasty culture as they are, but the focus on women who, rich or poor, find ways to circumvent the many restrictions placed on them and achieve a measure of freedom. 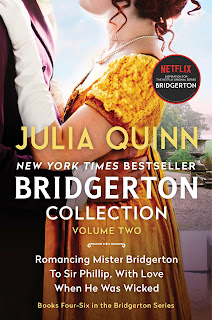 This one’s a bit of a cheat because, in effect, I cited it last time around. More accurately, I picked the first book in this collection, Romancing Mr. Bridgerton. But the two collections (books 4–6 and 7–8 plus a prequel) are now out, so if I’m to read them all and be ready for Miss Butterworth and the Mad Baron in July, I’d better get cracking!