Advice to the Lovelorn

As I mentioned about a month ago, my friend and fellow Five Directions Press writer Claudia H. Long has started an advice column for characters on her blog. Many of the characters are her own, but she accepts questions from other authors’ troubled creations, which she answers in the persona of Madam Mariana, a time-traveling and super-savvy source of well-considered and often-humorous counsel.

Yesterday Madam Mariana fielded a plea from Darya Petrovna Sheremeteva, the heroine of Song of the Sisters, my own latest novel—released this past January and woefully under-promoted due to a family medical crisis (not Covid!), since happily resolved, that struck at just the wrong moment.

Let's start with a word about Darya: she is a twenty-five-year-old Russian noblewoman, the younger of two surviving children, each of whom has the same father but a different mother. She has spent the seven years before the story begins nursing their elderly father, while her older sister, Solomonida, maintained the family’s connections with the outside world. This experience has heightened Darya’s religious sensibility while leaving her somewhat naive about society, especially men, and its expectations. By temperament, too, she is naturally inclined to do what others expect of her, although in reality she’s much less deferential than she appears at first glance. She dislikes confrontation, but she knows how to exert authority, because she has managed her family’s household since the age of fourteen. Although her older sister returned to the house when Darya was sixteen, Solomonida’s responsibilities at court meant that Darya bore primary responsibility for keeping the servants in line.

Darya has never known her own mother, who died giving birth to her, and her stepmother (her father’s third wife) died when Darya was fourteen. As a result, Solomonida, six years older and widowed, represents Darya’s only source of female comfort and advice. When their obnoxious cousin Igor shows up, waves a will that gives him control of the estate, and announces his plans to advance his career by marrying Darya off to a man of his choosing (while stashing Solomonida in a convent), the battle lines are drawn and the two sisters begin to use every weapon they can muster to thwart Igor’s schemes.

Alas, the position of women, even aristocratic women, in sixteenth-century Russia places severe limits on the sisters’ ability to control their own fate. The son of their father’s best friend arrives with a parallel claim to the estate, but his help does not come without cost. Soon he has disappeared, leaving Cousin Igor more determined than before to marry Darya off before she escapes his clutches altogether. Hence her plea to Madam Mariana, reproduced here.

I am at my wit’s end. At twenty-five years old, beyond marriageable age, I was reunited with the love of my childhood, Nikita, but on the very afternoon when he declared his desire to wed me—as my father intended!—the government called him back into service.

I don’t know when I will see him again, but it hardly matters. The next day, I learned from my neighbor that he has been promised to another for years. My heart is broken. How can he dishonor me so?

My wicked cousin, who controls our ancestral estate, insists on finding me another spouse. But I know that no crony of my cousin’s will do for me. I tried to take monastic vows, but the abbess turned down my request and advised me to practice obedience by submitting my will to my cousin’s. When he seeks only a powerful patron at court? What kind of spiritual exercise is that?

Now I am stuck dodging potential husbands, each less suitable than the one before. My cousin swears he will force me to become his bride if one more candidate withdraws his offer. Other than throwing myself in the Moscow River, which would be a terrible sin, what can you recommend?

Yours in humility and hope,

P.S. I have already deployed several of the more effective methods of discouraging unwanted suitors—or at least their mothers. 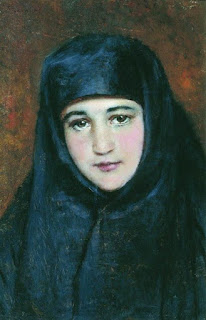 And what does Madam Mariana have to say? You can find her answer on Claudia H. Long’s blog, as well as her advice to quite a few other distracted damsels, not to mention a married woman with man trouble and a desolate dog—all tearing their hair out at the hands life has dealt them.

To find out what those “methods of discouraging unwanted suitors” may be, of course, you’ll need to read the book. For buy links, check out its dedicated page on the Five Directions Press website. We’ll have an audio excerpt up there soon, but you can read a print excerpt by clicking the cover.

And of course, you can listen to the free interview on New Books in Historical Fiction, with thanks to G.P. Gottlieb for acting as host. We talk about the second book, Song of the Shaman, as well, while the first book in the series has its own interview.

And one more thing! I just discovered that the New Books in Historical Fiction interviews (and indeed, many New Books Network interviews) are now on Spotify. So just search for the channel you want, and you can listen to the interviews there, too.