The Price of Friendship 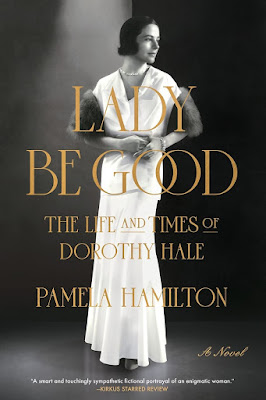 Whether we like it or not, each of us lives with the knowledge that someday we will not be here. After fifteen months of pandemic-imposed lockdowns and surging death rates, now at least temporarily mitigated in the United States and much of Europe by vaccinations, that message has a particular relevance.

Even those of us who are not religious in the traditional sense comfort ourselves with the belief that our names will live on in the memories of families and friends. But suppose your friends—perhaps with the best of intentions, but possibly not—construct a story of your life and your untimely death that at best gives undue weight to your failings and at worst wholly ignores your strengths?

That question drives Lady Be Good, Pamela Hamilton’s debut novel about the dancer, actress, artist, and socialite Dorothy Hale. To find out more about Hale, her life, and why Hamilton suspects the entire story has not yet been told, read on, then listen to my latest interview on New Books in Historical Fiction. By the time you’re done, you may want to quiz a few of those dear friends and family members about just what they’ll have to say when something happens to you.

The name of Dorothy Hale is not well known these days. In the 1920s, she enjoyed a career on Broadway as a dancer, including in a leading role with Fred Astaire. When an accidental injury ended that career, she auditioned, successfully, for the filmmaker Samuel Goldwyn and landed a part opposite Ronald Coleman, who would later star in Lost Horizon. But Dorothy’s film career did not take off, and she moved into art, writing, and museum work in support of her second husband, Gardner Hale, a well-known fresco painter and portraitist, until his tragic death in 1931.

Dorothy survived the stock-market crash of 1929 with her wealth intact and remained a light of New York society into the 1930s. Her closest friend—Clare Boothe, who married Henry Luce in 1935—branched out from an active career in magazine publishing, including a stint as managing editor of Vanity Fair, to write and produce a Broadway play titled The Women. The play lampooned members of their social circle, evoking both amusement and outrage. Dorothy Hale then starred in Boothe Luce’s next play, Abide with Me. When Hale fell to her death from the window of her apartment building in October 1938, Boothe Luce commissioned a commemorative painting from their mutual friend Frida Kahlo.

This painting, The Suicide of Dorothy Hale (1939), was the spark that lit the imagination of Pamela Hamilton, a long-time producer for NBC News. She began to research Hale’s life and death and uncovered the kind of anomalies that delight both fiction and nonfiction writers. For reasons explained in this interview, Hamilton decided to turn her findings and her speculations about their meaning into a novel, and Lady Be Good: The Life and Times of Dorothy Hale (Köehler Books, 2021) is the result. Against the backdrop of New York high society, the Algonquin Set, the art world, and politics under Franklin Delano Roosevelt, this novel paints a picture of a vivacious, determined woman and offers an alternative vision of her final hours.