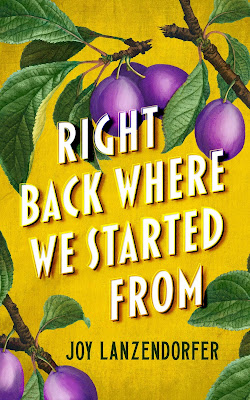 Although California certainly had a long history before 1848, the discovery of gold at Sutter’s Mill in that year caught the attention of many on the East Coast who might otherwise have stayed at home. In her new novel, Right Back Where We Started From (Blackstone Publishing, 2021), veteran writer Joy Lanzendorfer traces the effects of that initial push westward on three generations of one California family. She has a lot of interesting things to say, so without more ado, I launch into my questions!

At its heart, this is a novel about the history of California, told through the lives of three women: Vira Sanborn; her daughter, Mabel; and her granddaughter, Sandra. What drew you to write this book in this way?

Sandra is loosely based on my grandmother, who was a dramatic presence in my life. I heard lots of stories about her and my grandfather growing up, but I never knew which of those stories were true. It made me think about family myths and how generational identity feeds into personal identity. If you grow up believing stories about your family that aren’t true, and you build the foundation of yourself on top of that, what does that say about who you are? This is Sandra’s struggle in Right Back Where We Started From.

At its core, this is novel about what happens when women pursue greed and ambition with the same ruthlessness as men. It’s a matriarchal story about a grandmother affecting a daughter and a daughter in turn affecting her child, and how dark and messy those dynamics become when mixed with American ideas about success and wealth.

Your story begins, in effect, in the middle, in 1913. Mabel is talking to Sandra, then called Emma. Why start there?

I needed a scene to show the formation of Sandra’s beliefs about herself. In that chapter, which occurs when she’s a child, Mabel is reinforcing the myths that their lives are based on, which is that their family was once rich and successful and it was all stolen from them. It was important to show that Sandra has been fed these beliefs and to suggest to the reader that they aren’t entirely true, which is why the scene ends with Mabel making the dubious claim, “Don’t worry, your mama will always tell you the truth.”

The scene underscores the complexity of their mother-daughter relationship. The major way Sandra feels love from her mother is when she talks about how great their family used to be, because Sandra is special by association and is therefore receiving attention and validation. It’s the major way Mabel and Sandra connect emotionally, and so these beliefs are an important part of Sandra’s adult identity later on.

We next connect with Sandra at twenty-six, in a funny scene where she is in Hollywood and dressed in a sandwich board advertising an orange juice company. What’s going on here, and what does it reveal about Sandra?

When we meet Sandra as an adult, it’s 1932 Hollywood. She has a job wearing a sandwich board over a scanty orange dress to advertise Rayo Sunshine, a new juice shop that’s opened up, which happens to be shaped like a giant orange. Sandwich boards aren’t a common way to advertise anymore, although we still pay people to wave signs and dance around on street corners. Sandra is supposed to hand out coupons for a free glass of orange juice. She figures she’ll use the opportunity to try to get discovered by a Hollywood producer and goes over to Paramount Studios to hand out her coupons. She thinks she has invented a new way to get attention (and get paid for it at the same time), but soon learns that there are few tricks that haven’t already been tried when it comes to people seeking fame.

Early on, we get a sense that all is not as it seems in the Sanborn family. Sandra receives some letters from her ex-husband that cast doubt on her own beliefs about her background. What does she discover?

The letter that is forwarded from her ex-husband is from a man named John Hollingsworth, who Sandra has never heard of before. In the letter, he says that he’s her father. This is shocking to Sandra, who has always been told that her father was Arthur Beard, a rich prune rancher who died in the 1906 San Francisco Earthquake. But the letter includes a picture of Mabel as a young woman, so Sandra knows John Hollingsworth at least knew her mother. Thus she’s confronted with a mystery—who is John Hollingsworth, and is he really Sandra’s father?

She doesn’t respond to these disturbing letters, although she keeps them for years. Why doesn’t she follow up, and why not just throw them away?

This is the key to Sandra’s psychology, basically. She knows, on some level, that she hasn’t been told the whole story about her family, but she’s invested in the idea that she comes from special stock. To admit that might not be the case is truly scary to her. So her solution, when presented with John Hollingsworth’s letters, is to ignore them. And yet deep down she knows there’s something to the letters, so she doesn’t throw them away either. She’s essentially in denial. And since she isn’t willing to look at the truth, the book begins to tell you what she can’t face: the real story of her family. 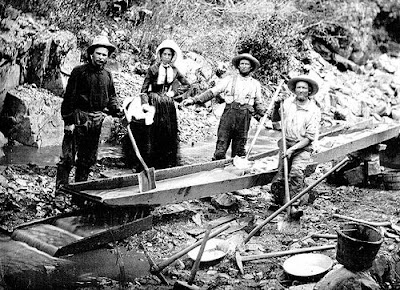 We then jump back in time to Portland, Maine, in 1851, where Vira Webb and Elmer Sanborn meet under extraordinary circumstances. Please fill us in both on the lightning incident and what causes the Sanborns to leave Maine for California.

You can read the chapter here (it’s a quick read). It’s the story of how Sandra’s grandparents meet and involves Elmer saving Vira when she’s almost struck by lightning. It’s a play on the idea of being struck by love, but despite the wonderful way they meet, reality will soon set in when Elmer decides to take Vira with him to the California Gold Rush.

In alternation with chapters featuring Sandra, we follow Vira throughout her cross-country journey, then switch to Mabel as a girl and young woman. What can you tell us about her?

Mabel is probably the most difficult character in the book. She grows up very cloistered as a young lady in Victorian San Francisco society. Vira is determined to keep Mabel safe and find her a good marriage, and Mabel chafes at the constraints. She can’t even take a walk by herself, and she feels like her future is planned out for her. So she does what any teenager would do: she rebels. She sneaks out. It puts her in a disastrous situation that leads to her downfall and being disinherited by her parents.

When we meet Mabel again, she’s a different person, someone who has had to do a lot of hard things to survive. She regrets her teenage rebellion but is very angry that one mistake caused her to lose everything. She’s determined to regain what she lost, but the wild side of Mabel, the passionate part that makes her run toward adventure, is still there, leading to some bad decision making.

All three of these women, sooner or later, realize that their ambitions can only be achieved through the men in their lives. Each of them responds in ways that undermine their relationships with their husbands. What can you tell us about this element of the novel?

Someone told me there isn’t a lot of romance in this book, but I think most of the relationships start out great. It’s just that the novel reflects the transactional nature of marriage in the past. In Vira’s case, marriage means losing power. She’s shocked Elmer wants her to go with him to the Gold Rush, which to her means leaving everything she knows for “the uneven gamble of striking it rich.” But she doesn’t have much choice in the matter, so she tries to be a good wife and believe in her husband’s promises. When that trust is broken dramatically in the Nevada desert, she resolves to take control of the marriage—which doesn’t end well.

In Sandra’s case, she meets Frederick during the Great Depression. He’s a German immigrant, a photographer, and—like Sandra—a charismatic and manipulative person. Sandra is attracted to him, but she also wants to marry someone rich. Frederick isn’t interested in being rich. So again, there’s a power dynamic that has to do with the economics that come with marriage and the imbalance between men and women. Marriage is about love, but it’s also a partnership, and in these cases, these partnerships are on unequal footing. It leads to some problems, let me tell you…

This novel came out in May 2021. Do you already have another one in the works?

Yes, I do. I’m working on a novel about a school bombing. I have an essay collection in the works too. I just need the time to work on them both!

Joy Lanzendorfer writes both fiction and nonfiction, which she has published in The New York Times, The Atlantic, and The Washington Post, on NPR and with the Poetry Foundation, and in many other venues. She holds an MA in Creative Writing from San Francisco State University. Right Back Where We Started From is her first novel. Find out more about her and her writing at http://www.ohjoy.org.

Image: A woman and three men panning for gold in California, 1850—public domain via Wikimedia Commons.