As a historian and a historical novelist, I always, in a sense, have a foot in the past. I have also read enough about the past to know that I really wouldn’t want to spend much time there, especially as a woman who, by the standards of most centuries before our own, definitely does not know her place. Yet even I sometimes think, “Oh, if I could just spend one day in 1530s Moscow—suitably vaccinated and dressed, with a translator chip to handle the language and some kind of handy but undetectable recording device. What I could do with the sounds and smells and sights of this place that I have studied most of my life yet can never experience in the flesh!”

I’m sure most of my fellow writers of historical fiction feel the same way. The past is, as David Lowenthal memorably noted, “a foreign country”—and one we can never visit. All our research into attitudes and lifestyles and even events come up short at the insurmountable barrier that time as we know it flows in one direction. The results of all that work are more than speculation but less than fact, which is the reason that historical fiction can be plausible and well informed but never accurate, in the scientific sense.

Still, the yearning to travel in time lingers, and there are few better ways to satisfy the urge than through reading a thoughtful, funny novel like Jessica Barksdale Inclán’s The Play’s the Thing, in which a junior professor (also named Jessica) struggling with the need to get tenure and the aftermath of certain bad decisions in her personal life wakes up one morning in Shakespeare’s clothes cupboard. She’s half-convinced she’s crazy, or at least caught in an astonishingly detailed dream. But as the author explains in my latest New Books in Historical Fiction interview, the character Jessica plows through with the help of soap, water, a good memory of all she’s read about Shakespeare’s life and world, and a strong sense of humor that serves her well. Will she make it home or change her definition of home? To find out, you have to read the book.

As always, the rest of this post comes from New Books in Historical Fiction. You can also find a transcript featuring parts of the interview on LitHub. 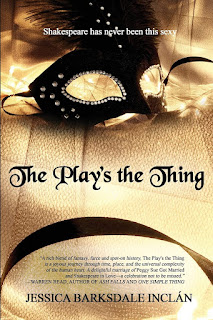 In a sense, those of us who love historical fiction live vicariously in the past. Many of us also fantasize about traveling in time—meeting our favorite writers in the flesh, hanging around with royalty, living the aristocratic lifestyle. We tend to forget or understate the very real benefits of the present, amenities we take for granted (indoor plumbing, central heat and air conditioning, refrigeration) and intangibles such as human rights and the presumption of innocence, still implemented in patchwork fashion across the globe.

Professor Jessica Randall, modern-day heroine of The Play’s the Thing (TouchPoint Press, 2021), experiences this conundrum firsthand. One evening, while she is doing her best to stay focused on a dreadful amateur production of Shakespeare’s The Merchant of Venice, she allows herself a brief escape—only to end up in an Elizabethan theater, watching an original performance of the play with (as she realizes only later) the Bard himself in the role of Shylock. She stumbles out of that setting and back into her seat in the twenty-first-century auditorium, but later that evening, turned somnolent by student essays and one too many glasses of wine, Jessica finds herself locked in what turns out to be William Shakespeare’s cupboard. When he at last deigns to unlock the door, he informs her that she is the latest among hundreds of screaming Jessicas who have been making his life hell for months.

Will assures Jessica that she will soon vanish into the ether and return whence she came. She’s convinced it’s an elaborate dream, because how could it be real? But when dawn arrives, she is still in 1598, Will is asleep on the mattress next to her, and she can hear rats rustling under the filthy straw. Perhaps it’s not a dream after all. At that point, to keep herself sane on the off-chance that she can’t find a way home, Jessica decides she’d better apply her knowledge of the future to clean up Shakespeare, his rooms, and her own act before those rats in the corner give them both bubonic plague.

Jessica Barksdale Inclán approaches her main character’s dilemma (there’s a funny story in the interview about how author and character come to have the same first name) with a deliciously light touch. The dialogue sparkles, Jessica’s struggles and flaws never fail to ring true, and the contrast between her unmistakably modern views and Will Shakespeare’s Elizabethan take on life are simultaneously revealing and thought-provoking. If you’re looking for a scientific explanation of time travel (assuming that such a thing exists), you won’t find it here, but the novel is, in every respect, a fun read. It will stay with you long after you reach the end.