More than my usual amount of reading here—and that’s been true for the last four months, at least. And this list doesn’t include other recent books, such as Rhys Bowen’s delightful God Rest Ye, Royal Gentleman (Berkeley, 2021), like several of those below a Christmas book being released in plenty of time for the holidays. I’ll talk more about that one next week. But with so many titles to cover, let’s plunge right into the current list. 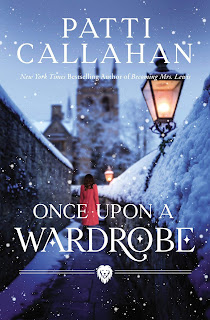 Patti Callahan, Once upon a Wardrobe
(Harper Muse, 2021)
This charming and heartwarming novel explores the early life of C. S. Lewis and how it led to his creation of the beloved Chronicles of Narnia, as told to Megs Devonshire, a young Oxford University student whose eight-year-old brother George has a heart condition that may soon end his life. Although, for whatever reason, I didn’t read The Lion, the Witch, and the Wardrobe as a child (despite being an absolute bookworm), I did read it and its sequels to my own son.

The links that emerge between Lewis’s history and his fictional world are fascinating to any writer, but the true poignancy of this story lies in Megs’ struggle to reconcile the concept of emotional truth with her own search for a single right answer, the reason she is so drawn to mathematics. The contrast between her straightforward approach and George’s instinctive wisdom make this both a delightful and thought-provoking read. The developing relationship between Megs and Padraig Cavender, a fellow student working with Lewis, highlights and promotes Megs’ dawning awareness that reality can’t always be crammed into a mental box and imagination may have a value she has failed to see. I requested this book from NetGalley and was so glad to have the chance to return to Aslan’s universe through the eyes of an author I hadn’t encountered before. 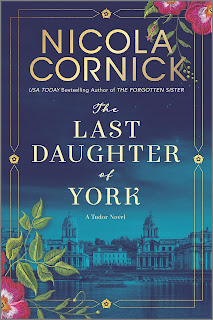 Nicola Cornick, The Last Daughter of York
(Graydon House, 2021)
Another author new to me, although not on her first novel by any means. What drew me to the book description was the link to Richard III and the Princes in the Tower, a perennial interest of mine. But that is just one element in this novel, which blends historical fiction with elements of fantasy. For that reason, it’s hard to summarize without giving away crucial details. Suffice it to say that three threads intertwine: a thirteenth-century bride who steals the Lovell Lodestar, a treasure entrusted to the Lovell family, and disappears; a twenty-first-century woman, Serena, mourning the loss of her twin eleven years before the book begins and trying desperately to recover her memories of the night when that tragedy happened; and Lady Anne Neville, who marries Sir Francis Lovell in 1465, when she is five years old (he is only eight), and remains loyally at his side as the reign of Edward IV flowers, ends, and gives way to the rule of his eldest son, then his brother, and last the usurper Henry VII.

At first, the three threads appear to be quite separate, but as the story progresses, they intertwine ever more tightly until all becomes clear at the end. This novel doesn’t release until mid-November, but I’ll be hosting a written Q&A with the author at that time, so I needed to get my act in gear so as to draw up questions in time for her to respond. 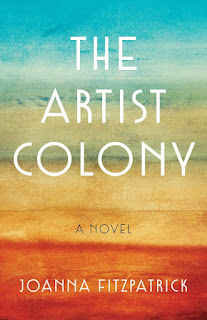 Joanna FitzPatrick, The Artist Colony
(She Writes Press, 2021)
I’m interviewing this author soon, so expect more information about the book in a couple of weeks. In brief, it explores the thriving art community of Carmel, California, in 1924. Among the very real artists and intellectuals (Henry Champlin and Robinson Jeffers both make an appearance, and Katherine Mansfield, the subject of Fitzpatrick’s previous novel, provides an indirect but important clue), FitzPatrick constructs a mystery surrounding the apparent suicide of a talented painter, Ada Belle Davenport. Ada Belle’s sister, Sarah—also a painter but based in Paris, where she is about to break out with a one-woman show—has to put her plans on hold to act as executrix of her sister’s estate.

But it soon becomes clear that there’s more to Ada Belle’s suicide than meets the eye, and Sarah decides to find out the truth. In addition to the mystery, this novel shines a light on Carmel’s Japanese community and the discrimination it suffered even before the internment camps made that underlying prejudice impossible to ignore. 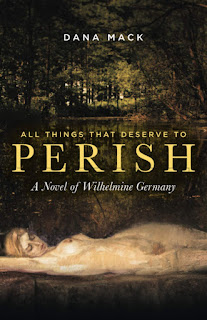 Dana Mack, All Things That Deserve to Perish
(Dana Mack, 2020)
Another novel intended to form the basis of a New Books in Historical Fiction interview, this one is set in Kaiser Wilhelm’s Germany in 1896, and its heroine—Elisabeth (Lisi), a gifted pianist—confronts the reality of nineteenth-century expectations of women. Lisi herself is the daughter of a Jewish banker, but her wealth attracts the attention of several young noblemen, and her mother insists that Lisi marry one of them and forget about her music. But Lisi has other ideas.

I haven’t read this one yet, so I can’t say much more about it, but what appealed to me was the unusual time and place. Contrary to the belief of all too many publishers, many fans of historical fiction prefer to diversify their reading, and this book offers one way to do that. 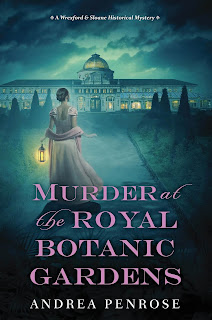 Andrea Penrose, Murder at the Royal Botanic Gardens
(Kensington Books, 2021)
This is the fifth murder mystery featuring the Earl of Wrexford and Lady Charlotte Sloane. I encountered the first one through an Amazon recommendation. The Kindle edition was on sale for $0.99, probably as a promotion for this new book (the price has gone back up now), and the publisher’s tactic worked: I figured it was worth a try. I downloaded and read it, then bought nos. 2 and 4, which were also on sale. By then I was hooked, so I approached the author to see if she’d be interested in an interview. Fortunately, she said yes.

I won’t say too much about this particular novel, to avoid spoilers. But the series, set in Regency England sometime after 1809, is distinguished by two things. First, the characters are wonderfully complex and compelling—not only Wrexford and Charlotte but many of the minor characters as well. Second, each book explores a particular area of scientific inquiry, at a time when science as we know it was just coming into being as something distinct from magic. So the first book deals with alchemy’s transition to chemistry, the second with the development of steam power, the third with electricity, and so on. But don’t be deceived: the science blends seamlessly into fast-paced mysteries that Wrexford and Charlotte race against the clock to solve, strengthening their relationship and revealing their secrets a little more with every adventure. 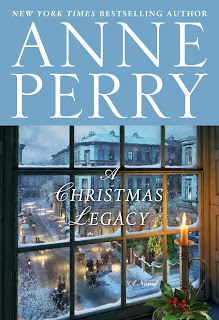 Anne Perry, A Christmas Legacy
(Ballantine Books, 2021)
As with Patti Callahan’s Once upon a Wardrobe, I requested this book through NetGalley. Over the last decade I’ve rather lost touch with Inspector Thomas Pitt and, in a series I loved even more, Inspector Monk. That’s not because I like the novels any less but because so many other things have claimed my attention. So I welcome the chance to return to the world of Pitt and his wife—or, in this case, their maid Gracie, who has left their household, thinking to make a clean break with police work in all its forms, only to discover a mystery of her own when one of her friends expresses concern about the treatment of the old lady she works for. The official release date for this novel is November 9, so I’ll be sure to finish the book and post my review on the NetGalley site by then. 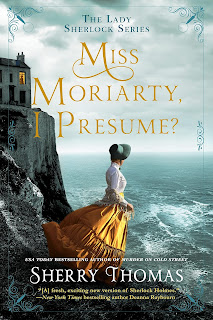 Sherry Thomas, Miss Moriarty, I Presume?
(Berkley, 2021)
Sherlock Holmes has spawned an entire industry of fiction featuring his past, his loves, his putative children, and earlier adventures that Conan Doyle mysteriously failed to record. As someone who never quite got into the original stories, I tend to resist the spinoffs unless they have compelling hooks of their own. Laurie R. King’s Mary Russell series is one example, Bonnie MacBird’s scrupulously canonical collection of Holmes/Watson adventures another. Sherry Thomas’s Lady Sherlock series is now a third. As with Andrea Penrose’s books, I encountered this novel by chance—although via a different route—and decided to read the first book in the series to get a sense of it before agreeing to an interview. Again, the characters drew me in; I read the rest of the novels, and I will be talking with Sherry Thomas in a couple of weeks.

In brief, these books go beyond adding to the Sherlock Holmes legend. They reimagine what it might have been if Sherlock (and Watson and several other important characters, as suggested by the title of this sixth installment) had been a woman. Enter Charlotte Holmes, a short blonde with a love of ostentatious fashion and of baked goods in all their forms, leaving her with something other than the typical Basil Rathbone physique. But despite her physical differences, Charlotte has a mind every bit as logical and penetrating as her brother Sherlock, whose imaginary presence makes it possible for her to ply her trade in sexist Victorian London.

To be honest, I can’t help thinking that Charlotte and her associates are so far away from the original Holmes that they might be better off in their own universe. The link seems more a marketing decision than a literary one. But that said, it’s tremendous fun to watch Thomas tweaking the canon, and the mysteries are fiendishly complex yet, in the end, wholly believable. I’ve read all six and thoroughly enjoyed the ride, but Miss Moriarty, I Presume? is the best of the lot.