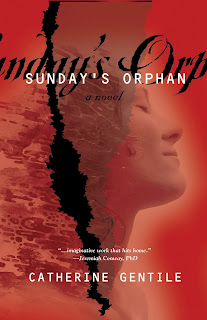 Most novels depend on secrets. Even where protagonists are completely honest with each other—which they most often aren’t, because their goals do not align, they have yet to establish a trusting relationship, or they lack crucial pieces of the puzzle—there will be other characters who withhold information for various reasons. And in the rare cases when all the players make their goals crystal-clear from the beginning, as can happen in an adventure story, only the author knows how the conflict will resolve itself—and then often not until after reaching the end of the first draft. We may guess that the hero or heroine will come out on top, but the question of how must remain unresolved for most of the story. Otherwise, a plot lacks tension, and readers have nothing to draw them in and keep them hooked until the end.

It’s the depth and kind of secrets that separate one type of novel from another. In Catherine Gentile’s Sunday’s Orphan, the subject of my latest interview on New Books in Historical Fiction, the secrets are deeply buried, profoundly shameful, and have to do with family and identity (the best kind, from a novelist’s perspective, because they offer the most complexity, nuance, and ambiguity). And although all the clues to those final, shattering revelations are present in the opening scenes, the journey is as emotionally fraught for the reader and the discoveries as shocking as they are for the imaginary people involved.

To say more than that would be to spoil the thrill of discovery. Read on to get a sense of the setup, then listen to the interview. But of course, the only way to discover the secrets is to dive right into the book.

Even for someone trained from birth to manage a farm, stepping into an inheritance at the age of twenty is not easy. Yet this is the situation facing Promise Mears Crawford when Sunday’s Orphan opens in 1930. Trouble comes at her from many directions. Her adoptive uncle, Taylor Crawford, constructed his farm according to the principles of racial equality, in defiance of the Jim Crow laws in effect all around him. Taylor had the standing to resist opposition from his neighbors, but Promise lacks both his stature and the resources she needs to fulfill the obligations he took on. Her financial constraints land her in conflict with the farm’s foreman, Fletch Hart, a long-time friend whose dreams of becoming a physician she cannot support due to lack of funds.

But the potential loss of Fletch’s friendship pales in comparison to the threat posed by the arrival of Daffron Mears, a self-appointed Jim Crow enforcer whose propensity for vigilante violence is well known throughout the county. Daffron wants a job—in fact, he wants Promise’s farm, which he regards as stolen from him by Taylor—and he is not above manipulating Jim Crow laws to get his way. He implies that he will report Promise to the authorities if she turns him down while giving work to Fletch, a Black man.

To protect her friend, Promise agrees to Daffron’s demand, if only for a week. But Daffron’s return to the farm that he left twenty years before sets off a series of crises that cast doubt on everything Promise thought she knew about herself and her origins.

Catherine Gentile admits in our interview that this was a difficult novel to write. For the same reasons, it is a difficult novel to read. But its unflinching portrayal and beautifully written exploration of a topic too often buried beneath platitudes about the need for change and its particular relevance to the questions of racial injustice that have been front and center the last two years make it an important book.