As the old year gives way to the new and the days slowly, slowly lengthen, it’s time to check in on some of the books destined to occupy my evenings for the next few months. 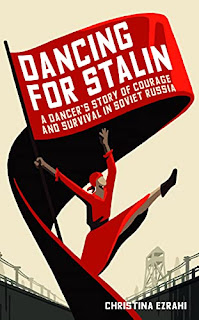 Christine Ezrahi, Dancing for Stalin
(Elliott and Thompson, 2021)
Although it’s true that I mostly read historical fiction these days—with my podcast channel, it’s hard to find time for anything else, and I enjoy visiting the past without having to worry about its dirt, quack medicines, and misogyny—I do occasionally tackle nonfiction. This study of a Soviet ballerina and choreographer sentenced to the Gulag in 1938 but eventually freed and returned to her former position thanks to her husband’s tireless efforts on her behalf, is a major draw for me. In addition to the human interest angle, I have loved ballet for as long as I can remember, read and enjoyed the author’s Swans of the Kremlin, and spent several years researching the life and times of Agrippina Vaganova, who revolutionized Soviet dance education between 1917 and her death in 1951. I look forward to learning more. 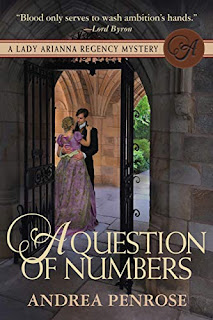 Andrea Penrose, A Question of Numbers
(Andrea Penrose, 2019)
In addition to her Wrexford & Sloane mysteries, featured in last month’s interview with the author for New Books in Historical Fiction, Andrea Penrose self-publishes a second series set in Regency England, this one featuring Lady Arianna Hadley and the Earl of Saybrook and originally put out by Signet/NAL. This series focuses more on the political intrigues associated with the Napoleonic Wars. Lady Arianna, the daughter of a disgraced earl who absconded to Jamaica to escape his creditors, has an unusual past for a society lady and a talent for flirtation and deception, as well as an instinctive grasp of mathematics. On several occasions she also doubles as a chef—in male clothing, of course.

Lord Saybrook, a veteran of the Peninsular War, doesn’t quite fit society’s expectations either because of his Spanish blood. The two share a love of chocolate, then just expanding from a drink to the confection we know today, and by this point in the series their marriage of convenience has blossomed into a love match and a true partnership. In this fifth book, Napoleon has just escaped from Elba and seized the French throne once more. Arianna and Saybrook have no desire to become involved in stopping the emperor’s latest schemes, but Lord Grentham, the head of Britain’s secret spy network, has other ideas …

The puzzles are genuinely puzzling, the couple’s adventures guaranteed to keep you at the edge of your seats, but the true appeal of this series for me is the delightful and well-rounded characters—not only Arianna and Saybrook but their friends, family, and even enemies. 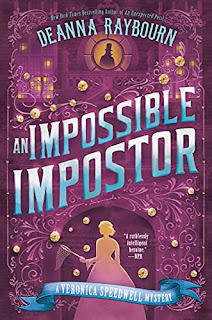 Deanna Raybourn, An Impossible Imposter
(Berkley, February 15, 2022)
Another historical mystery series, already advanced to book 7—this novel has been on my radar since last year, when I conducted a written interview with the author on this blog. Veronica Speedwell is an independent-minded young woman with a mysterious past, living in Victorian England, and she works as a lepidopterist, in part as an excuse to travel to foreign lands. Her partner, known as Stoker, the third son of a noble family, works as a taxidermist.

It would be unfair to go much more deeply into their respective backgrounds and how they reached their current position sorting through the massive collections of Lord Rosemorran. Suffice it to say that Veronica and Stoker have a knack of stumbling over murder victims and at times are charged by their lofty relatives with discovering the perpetrators of such crimes. In this case the summons comes from Sir Hugo Montgomerie, head of Scotland Yard’s Special Branch, and involves one of his family members who may—or may not—be the heir to Hathaway Hall, declared dead during the eruption of Krakatoa some years before the story opens in 1889.

The whole series is delightfully tongue-in-cheek and engaging, and I look forward to talking with the author for New Books in Historical Fiction in about three weeks. 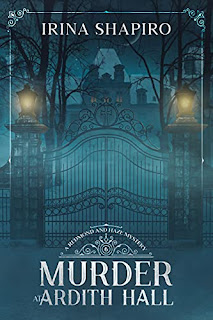 Irina Shapiro, Murder at Ardith Hall
(Merlin, 2021)
These novels came to me via an Amazon recommendation, and I purchased the first book more or less as a test. I was soon hooked, though, and tore through the next four without stopping for breath. The series features Jason Redmond, a US Civil War veteran and surgeon who has unexpectedly inherited an earldom from his grandfather, and Daniel Haze, a local constable in an English village who abandoned a promising career as a London policeman after the accidental death of his young son.

As the series progresses, Redmond slowly grows accustomed to his unwanted status as an aristocrat, and he and Haze develop a satisfying partnership that leads to the solving of several difficult crimes. Here in book 6 the victim is a guest at a séance, and the suspects include Daniel’s wife. These fast-paced mysteries have twisty, clever plots and a host of interesting secondary characters. I look forward to finishing the series in time to interview the author in April 2022. 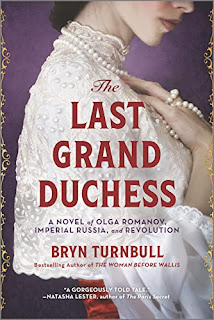 Bryn Turnbull, The Last Grand Duchess
(MIRA, February 8, 2022)
The final years of the Romanov family are not on my list of favorite subjects for fiction, not least because it is such a depressing and ultimately tragic tale. But that said, the prospect of a book set in Russia by a writer whose earlier novel, The Woman before Wallis, I enjoyed was enough to draw me in. As in The Woman before Wallis, the author approaches her subject—in that case, the combined scandals of the future King Edward VIII’s love life and the Vanderbilt custody battle—from an oblique angle, permitting a new perspective on familiar territory.

Here the subject is Grand Duchess Olga, the eldest daughter of Nicholas II, who acts as a window onto the dramatic family and societal events that led to the collapse of the dynasty amid war and revolution. The book title must have been a marketing decision, since there were many other grand duchesses—not only Olga’s sisters but her aunts, and those who escaped into emigration continue to pass the rank down even today. Still, that’s a quibble in reference to what looks like a rich and sympathetic portrait of a young woman who came to a brutal end through no fault of her own. 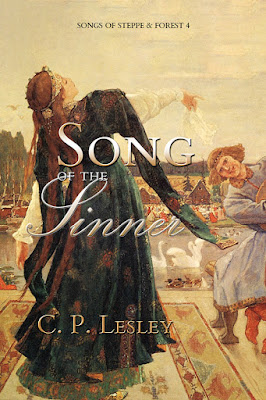 Last but not least, I have been reading and re-reading my own latest novel, due for release by Five Directions Press in late January. Song of the Sinner picks up a month after the end of Song of the Sisters and follows the developing if star-crossed romance between the widowed Solomonida Sheremeteva and Anfim Fadeyev, a government official and merchant, over the course of the next two years. Despite her exalted rank, Solomonida faces the same dilemma that affects many women today, especially in these troubled times: can she meet the needs of her children at the same time as she cares for herself? Read on for a short description.

After surviving marriage to a brute, Solomonida Sheremeteva has sworn never to take another husband. As a boyar’s widow, she at last has the right to choose her own destiny, and she intends to devote her attention to securing a happier future for her daughter. Never mind that she has feelings for a handsome official. His inferior rank means that any association with him can only damage her own child’s prospects.

Anfim Fadeyev could not agree more. He knows as well as Solomonida that a priest’s son should not aspire to the hand of a noblewoman, whatever his achievements in the government and in trade. He needs a mother for his children, not a highborn lover. So when passion overwhelms him and Solomonida one winter’s night, they both face a dilemma: how to respond when the demands of the heart contradict those of the head?