This post went up on the Five Directions Press newsletter page last week. You can find more of our writing posts—as well as monthly lists of Books We Loved and other news for writers and readers—by clicking the above link. But this one goes well with my own recent release, Song of the Sinner (Songs of Steppe and Forest 4), so I thought it would be fun to share it here as well.

Imagine that it’s pre-COVID days and you walk into a party. Across the room, you see someone you know but haven’t encountered for a while. What’s the first thing you notice? In my latest novel—Song of the Sinner, released just a few days ago—the heroine, Solomonida, describes her impressions of Anfim, the novel’s hero, this way:

His light brown hair gleamed in the light cast by the torches placed at intervals along walls painted in patterns of scarlet and sky-blue; and he was, as always, discreetly but luxuriously dressed—tonight in rich brown velvet with clasps formed from gold braid. Next to the brilliantly clad noblemen and noblewomen he looked like a wren amid a flock of peafowl, but at the sight of him my heart gave a skip.

Superficial, you say? Well, of course. Yet don’t we all instinctively judge not just character but social position and even mood from a person’s clothes, haircut, makeup or lack thereof, and other external traits?

In fact, Anfim’s clothing choices convey quite a bit about him. He has money—enough to afford velvet and gold braid. Even so, he seeks to avoid standing out in a crowd, because he is not one of the “brilliantly clad noblemen”—which tells us that he is not at the highest level of his society but knows his place in the world and accepts the limitations it imposes on him. He plays by the rules, not reaching for more than he can attain by his own merits . More deeply, as becomes obvious the more we learn about him, he is comfortable in his own skin, willing to appear “like a wren amid a flock of peafowl.”

As usual, our cousin had dressed in a style designed to cast every other guest into the shade. Today he’d outdone himself in a cloth-of-gold robe tied with an embroidered cobalt sash, its hue repeated in his leather boots and silken cap trimmed with white fox fur. A gem-studded collar that would not have looked amiss on the grand prince himself adorned Igor’s thick neck. 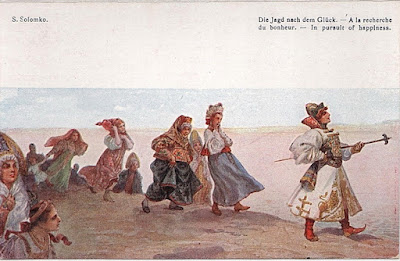 If Anfim downplays his considerable gifts by dressing modestly, Igor takes the exact opposite approach. He wants to make a big splash, hovering on the edge of inappropriate. In a society where conspicuous consumption acts as a marker of who outranks whom, does the grand prince want his lesser nobles rivaling him in their jewelry or drawing attention to themselves in cloth-of-gold and the rare fur of white foxes? Probably not, but Igor doesn’t care. He may not have achieved the place in life that he believes he’s entitled to, but he’s prepared to do whatever it takes to convince people that he’s better than he is. Fake it till you make it is his motto.

But not always. A man as clothing-obsessed as Igor knows when to use his choice of dress to convey disdain as well as to pump up people’s impression of his rank. During a family meeting intended as a last-ditch attempt to force him to confess the full extent of his schemes and deter him from doing future damage, Solomonida notes her cousin’s uncharacteristic slovenliness. She also contrasts Igor’s appearance with Anfim’s to show their opposing attitudes toward the meeting.

I noticed as soon as I entered the main sitting room that our cousin had not dressed up for the occasion. Even Anfim, resplendent in the russet robe he’d worn for our wedding, outshone Igor. I read our cousin’s plain clothes as evidence of disinterest or disrespect. Not, perhaps, a promising beginning. 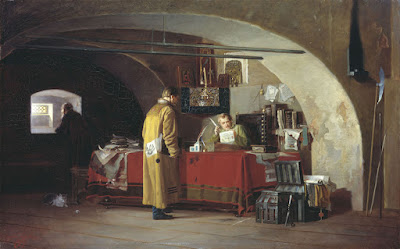 At other times, though, Solomonida is the one manipulating the social meaning of clothing, as in this scene when she sneaks out of the house with her lover, dressed in a servant’s cloak and a robe usually donned for housework.

When Anfim left that evening, I went with him, dressed in Masha’s cloak—its hood concealing my face. I wore my simplest robe, left my headdress behind, and for the first time since my betrothal seventeen years before redid my hair in the single braid typical of never-married girls. 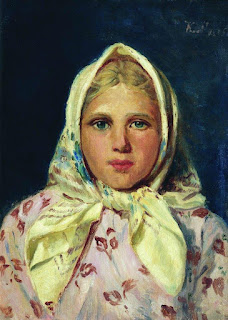 This is clothing as disguise—a trope of historical and fantasy fiction, in particular, where a heroine often dons servants’ or boys’ clothes to evade restrictions placed on women. As such, it gets to the heart of this post: that something that appears to have implications only on the surface can open a window onto a character’s motives and desires.

All these examples come from a novel set in the past, at a time when laws existed throughout much of Europe specifying who could wear what when, giving the details of fashion a punch that they can’t quite sustain in today’s more liberal climate. But in modern life, too, we define the people we meet by the shoes they don, their preference for denim versus corduroy or cashmere, the colors and styles they wear, their devotion to brand names or thrift stores, and the level of interest they show in the details of personal appearance. And we ourselves manipulate those details to convey a particular impression to a given audience, in ways that may or may not correspond to the person we are inside.

So if you are writing a novel in any time or place, think not only about what a character wants and needs but the image that person seeks to present to the world in this set of circumstances or that. And mix it up a bit, because just as wearing a collar worthy of the grand prince doesn’t make Igor equal to his ruler, a character who dons a tweed jacket with leather elbow covers may not really be a professor. Write yourself a wolf in sheep’s clothing, and if the other characters accept the image as reality, you might just have the hints of a plot.

All images public domain via Wikimedia Commons. Find out more about Song of the Sinner at https://www.fivedirectionspress.com/song-of-the-sinner.