Perils of an Empty Throne 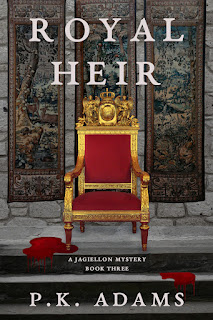 I met Patrycja Podrazik, who writes under the name P.K. Adams, not long before the release of her second novel featuring the eleventh-century mystic, physician, and theologian Hildegard of Bingen. I have since interviewed her twice for the New Books Network, once on the Hildegard novels, and a second time for her historical mystery series set in sixteenth-century Poland. And if you’ve been following this blog, you’ll know that we have also co-written a historical mystery/suspense novel about the early interactions between Muscovy, the lands to its west, and the Tudor sailors who “discovered” Russia in 1553. So it’s a pleasure to welcome her today as my guest.

Adam’s Silent Water begins with the arrival of Caterina Sanseverino, a widowed Italian noblewoman, in Kraków in April 1518. Caterina is traveling with Queen Bona Sforza, on the route to her wedding with Poland’s King Zygmunt I. Fast forward to Christmas 1519, and Caterina, now established in her position at court, encounters a series of puzzling murders, and her resolution of the mystery leads to her recruitment for a difficult political task by Queen Bona during a later visit to the Polish capital in 1545. That task in turn pushes Caterina into investigating another set of deaths in Midnight Fire. By the time this third novel—Royal Heir, released two months ago—opens, Caterina is enjoying her old age in Italy, and her son takes center stage. 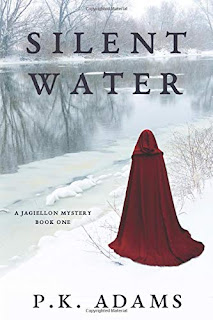 There is, of course, a particular irony in publishing this post a day after Russia’s invasion of Ukraine, an attack based on the pretext that Ukraine is no more than a breakaway province that needs to be reintegrated into the whole. Although the long complex history of Ukraine as part of the joint Polish-Lithuanian Kingdom is more visible in Midnight Fire than in this new novel, another century would pass before the Cossack rebellion that led to Ukraine’s request for Russian suzerainty.

And with that, I turn the virtual mike over to P.K. Adams, with thanks for sending me this post laying out the historical background of her Jagiellon Mysteries and why she decided to use this troubled political situation in writing Royal Heir. But do listen to the interviews to find out more about the series—and, of course, read the books!

An uncertain succession to the throne is a challenge familiar to monarchies throughout the ages. It has opened doors to ambitions, struggles, and acts of deception and violence that have cost lives, changed states’ borders, and sent their history on a new course. In fact, such is the dramatic potential of a vacant (or soon to be vacant) throne that it has inspired works of fiction for centuries, and, in more recent times, has given rise to enormously popular TV series and movies.

How lucky, then, that a crisis of this kind unfolded in Poland-Lithuania in the second half of the sixteenth century, the period in which my series Jagiellon Mysteries is set. Lucky for me, that is, not for the state or the people who lived in it at the time. After nearly a century known as the Golden Age—most of it under the rule of the last two Jagiellon kings, Zygmunt I (the Old) and Zygmunt II August—Poland had reached the peak of its size and political influence. Its possessions stretched from the Baltic in the north to the shores of the Black Sea in the south. It had a vibrant artistic life influenced by the ideas of the Italian Renaissance. Polish scholars took degrees at western European universities, and foreign intellectuals flocked to study and debate at the Cracow Academy (now Jagiellonian University). 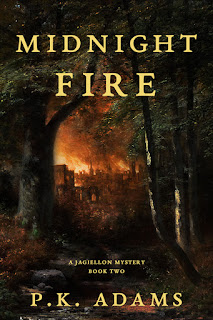 However, by the 1560s, dark clouds began to gather on the horizon. The long-standing conflict between Zygmunt August and the powerful noble class had hamstrung the administrative and judicial reforms needed to strengthen the state. Moreover, after the premature death of his beloved second wife, Barbara, the king contracted a loveless marriage to Catherine Habsburg that quickly fell apart, and with it vanished the hope for an heir. In his mid-forties, with flagging health and an increasing lack of interest in the affairs of state, the king no longer guaranteed the stability of his kingdom. Still, while he was alive, Poland-Lithuania could consider itself reasonably secure from outside threats. One can only imagine, however, the anxiety with which magnates, officials, and ordinary men and women thought about the inevitable moment when the throne became vacant and powerful neighbors—the Habsburgs, in particular—reached for the trophy that was the crown of the dual monarchy.

When I considered ideas for the third book in the Jagiellon Mystery series, telling a story tied to the uncertain succession seemed like a no brainer. Although there is no historical record of an assassination plot, the last decade of Zygmunt August’s life (he died in 1572) must have been rife with scheming and planning for what would happen if he failed to produce a legitimate heir. The drama would only have been heightened by the king’s increasingly reckless personal life, especially as contrasted with that of his God-fearing sister (and heir presumptive) Princess Anna. Zygmunt’s sexual exploits in that period became legendary and included the kidnapping and seducing of one of Anna’s own ladies-in-waiting. He also embarked on a scandalous affair with the daughter of a bourgeois Warsaw family, which resulted in the birth of a child. Of course, there could have been no question of the succession passing on to a baby who was born out of wedlock and whose paternity, although strongly suspected, could not be established beyond any doubt precisely because her parents were not married.

The plot of Royal Heir, which is set in the autumn of 1563, revolves around an attempt by a group of disgruntled noblemen to force Zygmunt August to abdicate so they can elevate his half-brother to the throne. The protagonist, who in this novel is Caterina’s son Julian Konarski, accidentally stumbles onto the scheme when he witnesses the fatal beating of a young man in a dark alley in one of Kraków’s less savory neighborhoods. But when he begins to dig deeper, the details of the plot fail to add up: Zygmunt August’s only half-brother (and an illegitimate one at that) died years ago, and an eavesdropping session conducted in the plotters’ lair reveals that their plans toward the king may be far less gentle than mere abdication.

Prompted by his youthful idealism, Julian begins a desperate race to a stop an act of regicide and avert a coup d’état. His love interest, Magda, bravely aids him in his quest, but by the time they realize the formidable nature of those they are up against, their lives, too, are in terrible danger.

P.K. Adams is the author of The Greenest Branch and The Column of Burning Spices, a pair of novels about the life of Hildegard of Bingen, and of the Jagiellon Mysteries. Find out more about her at https://www.pkadams-author.com. 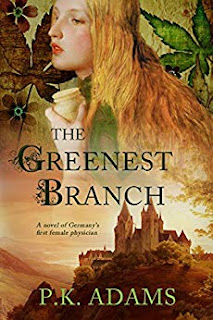 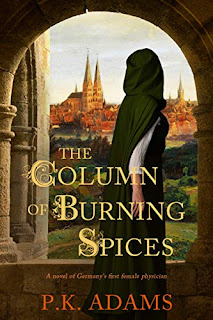