As I’ve mentioned elsewhere, I discovered Andrea Penrose’s Wrexford & Sloane series of Regency mysteries by accident, through an Amazon recommendation. I read them all and had the chance to interview her for the New Books Network when the latest, Murder at the Royal Botanic Gardens, came out with Kensington Books last fall.

Somewhere along the way, I discovered that she had written a second series—also set during the Regency and featuring an earl, Lord Saybrook, and his initial adversary, later wife, Lady Arianna Hadley. The combination of Russians and chocolate persuaded me to give Lady Arianna a try, and soon I had polished off that series too. And now, to celebrate the release of Lady Arianna no. 7, A Swirl of Shadows, the author herself is here to answer my questions. I’m delighted to welcome her.

What was your inspiration for this series?

The Regency era in and of itself was a core inspiration. I love the time period because it was a fabulously interesting time and place—a world aswirl in silks, seduction, and the intrigue of the Napoleonic Wars. Radical new ideas were clashing with the conventional thinking of the past. People were questioning the fundamentals of society, and as a result they were fomenting changes in every aspect of life. Politics, art, music, science, social rules—the world was turning upside down, especially as women were really beginning to challenge the boundaries of their traditional roles in society.

I really like writing about people who are both strong and vulnerable. We all have strengths and weaknesses, and how we learn to balance those conflicting elements is, to me, an integral part of the human experience. An author can, of course, play with those tensions in any era, but for me the Regency presents a particularly interesting time in which to do so with an unconventional heroine.

Lady Arianna Hadley is a fascinating character. She develops over the course of the series, but tell us what you’d like readers to know about her going in.

Arianna has a gritty backstory, and in the first book she has come to England to seek revenge. Strong, clever and resourceful, she’s had to look out for herself for most of her life, and so trust doesn’t come easily for her. But she has a strong moral compass and a passion for justice, having had personal experience with injustices. That makes her an excellent sleuth.

Her initial interactions with the Earl of Saybrook are, shall we say, more confrontational than collegial. What can you tell us about him, and why don’t they get along at first?

Like Arianna, Saybrook is a complicated person. A titled aristocrat, a former military intelligence officer, and a brilliant botanist, he’s an outsider in the beau monde because his mother was a foreigner. When readers first meet him, he’s recovering from a serious war wound in London and is asked by the government to investigate the poisoning of the Prince Regent at a fancy supper party—where, disguised as a male chef, Arianna did the cooking. During their first encounter, their verbal fencing takes a sharper edge, but circumstances force them to become reluctant allies to find the real culprit, which leads them to uncover an even more sinister plot … and develop a a grudging friendship. 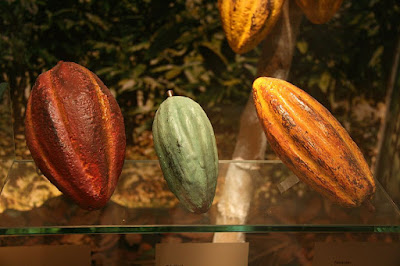 I have to admit that what first drew me to these books was the combination of Russians and chocolate, more specifically cacao. We’ll get to the Russians in a minute, but what made you want to include the chocolate?

In a sense, it happened by accident! For a very different project, I had stumbled across the fascinating fact there there was edible chocolate in the Georgian/Regency era. (The common perception is it was invented in 1847.) Sulpice Debauve, the personal physician to Marie Antoinette, concocted disks of flavored chocolate and spiked them with her medicines because otherwise she refused to take them. To make a long story short, he went on to open a chocolate shop in Paris in 1800. (You can read a long history of chocolate on my website under the “Diversions” tab.)

My agent loved the chocolate info and suggested we send out a proposal for a “chocolate mystery” set in the Regency. I pondered the idea, saw some really interesting possibilities, and came up with Arianna—who wasn’t at all the heroine that my agent expected! She had envisioned a cozy mystery series revolving around the proprietor of a chocolate shop who gets involved in solving mysteries in her town. I had different ideas. I wanted to write an edgier type of series that dealt with both the glittering ballrooms of London and the dark side of the beau monde, where the misuse of power and privilege was rampant.

As I said, my agent was surprised—but she really liked the sample chapters I did, and we sold it to Penguin Putnam. The line ended up being reorganized, and they didn’t offer to continue the series. But I loved writing it so much that I decided to continue the stories as a self-published series.

The overall background to these novels is the political negotiations—and machinations—surrounding the end of the Napoleonic Wars. By the time we get to A Swirl of Shadows, Arianna and Saybrook are being encouraged to travel to St. Petersburg. Why? And what do they find when they get there?

Tsar Alexander was a really interesting and important figure in the Regency era. Handsome and charming, he was also mercurial and enigmatic. He was a key leader in defeating Napoleon, but his own personal weaknesses made him vulnerable to intrigue and schemers. Actual history records that he did fall under the spell of a woman mystic and that her influence threatened his reign. In A Swirl of Shadows, the British government asks Arianna and Saybrook—who know Alexander from a previous mystery in Vienna—to journey to St. Petersburg to stop an American adventuress from orchestrating a clever plot that will topple the tsar from his throne and threaten Europe’s new-found peace.

However, when they arrive, they find things aren’t at all what they seem, and with the Imperial Court a viper’s nest of intrigue and betrayals, Arianna and Saybrook must cobble together a band of unexpected allies in order to beat the devil at his own game.

The person doing the encouraging, not to say arm-twisting, is Lord Grentham, who has been present from the beginning of the series. Give us a capsule description of him, please.

Grentham has been a really interesting character to develop. As Britain’s top spymaster, he’s ruthlessly cold and pragmatic, and I intended him to be a foil for Arianna and Saybrook’s more finely honed sense of fair play and justice. But it turns out he had other ideas about that and is a far more nuanced character. It’s funny how that can happen to an author! 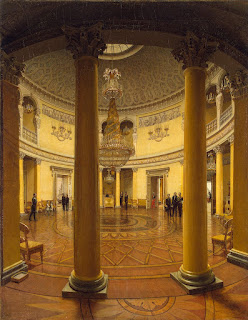 I can’t let you go without asking about Arianna’s friend Sophia. Who is she, and why does she decide to accompany them to St. Petersburg?

Sophia also has hidden facets. She and Arianna are very different personalities, shaped by the fact that they both had have painful experiences in the past. At first, they are wary of each other, but as often happens in real life, seemingly mismatched people can develop a very interesting friendship.

With Sophia, I have enjoyed playing with taking a person’s core vulnerability and turning it into a strength. Sophia demands to accompany Arianna and Saybrook to St. Petersburg because she feels that her particular expertise will be invaluable to them. There are also very personal reasons involved, but I shall leave them for readers to discover!

This novel just came out. What are you working on now, and can we look forward to another Lady Arianna adventure?

I’m currently working on a new Wrexford & Sloane mystery, which is also set in the Regency era. There’s also another possible project percolating, but for now it’s just in the “thinking” stage. We’ll see where it goes. As for Arianna, I am in the first stages of sketching out a new plot for her and Saybrook. So stay tuned!

Andrea Penrose is the bestselling author of Regency-era historical fiction, including the acclaimed Wrexford & Sloane mystery series. Find out more about her at https://andreapenrose.com.

Images: Thomas Lawrence, Alexander I (1814–1818), and Efim Tukharinov, The Rotunda (of the Winter Palace, 1834) both public domain; photograph of cacao pods © Tamorlan, own work, CC BY 3.0—all via Wikimedia Commons.