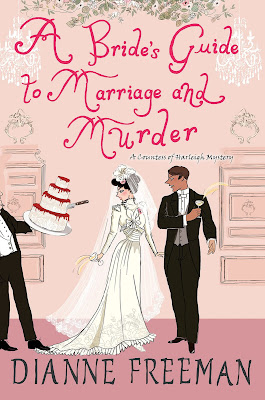 I love historical mysteries, especially the cozy variety—even more when the author has a sense of humor in addition to great characters and twisty plots that make sense in the end but require a good bit of deduction to work out (or take me completely by surprise. So I was delighted to come across Dianne Freeman’s Lady Harleigh Mysteries, which do all those things with an aplomb that makes the writing look much easier than I know it to be in reality.

Better yet, Dianne agreed to answer my questions about her series. You’ll have to read fast if you’re going to get books 1–4 out of the way before A Bride’s Guide to Marriage and Murder appears next Tuesday, June 28, but by all means give it a try. You won’t be disappointed!

How did you come to write this series?

I wrote what I wanted to read. Historical mystery is my favorite genre, and I love a mystery that really pulls me into the protagonist’s life. An amateur sleuth serves that purpose beautifully because they’re really meant to be doing something else, not solving a crime. As for my protagonist and the historical era, I’ve long been fascinated by the transatlantic marriages between American heiresses and British aristocrats near the end of the nineteenth century. I wanted a slightly older character, so the story begins ten years after the wedding. Frances has more maturity and experience, but she’s still a bit of a fish out of water.

Your main character is Frances Wynn, Countess of Harleigh—who despite her English title is actually an American. How did she acquire her title, and what can you reveal about her personality?

Frances married into the title. As new money New Yorkers in the Gilded Age, Frances and her family didn’t stand a chance of breaking into Mrs. Astor’s society. Her mother, Daisy Price, decided to put Frances on the path of the earlier American heiresses and look for a titled gentleman with financial troubles somewhere in Europe who was willing to marry her daughter in exchange for a healthy infusion of cash.

She found Reggie Wynn, who was then heir to the Earl of Harleigh, and the exchange was made. For Frances, marriage to Reggie was a gamble, but remaining in New York meant becoming a spinster, or if she were lucky, marrying a man her father brought home from the office. She took the risk. I think this action alone tells you that Frances isn’t one to sit back and wait for life to happen. She likes to take care of those she loves and she likes to take charge of any matter that concerns her, though that often means she has to work her way around the rules that govern an aristocratic woman of that era.

And how does a countess get involved in solving a series of murders?

First, she was accused of one, and because she had no intention of spending any time in prison, she was highly motivated to find the real killer. The second murder happened just outside her garden gate. Frances suspected it had something to do with her sister, and her protective instincts came into play. Her investigations might have ended there if she hadn’t realized she was actually rather good at it. The fact that she could work with her next-door neighbor, George Hazelton, who was something of a sleuth himself, made every day an adventure.  How could she give that up?

Her partner in these investigations is George Hazelton. What can you tell us about him?

George is the brother of Frances’ best friend, Fiona, and the third son of an Earl. This puts him in the awkward position of being an aristocrat without a fortune. He could marry into money, of course, but George chose to make his own way in the world. He studied law, and now does “something” for the government. We learn more about George with each book, so to avoid spoilers, he must remain mysterious for now. I can tell you he enjoys working with Frances.

This fifth novel opens with the most marvelous line: “Family, like a rich dessert, is a treat best enjoyed in small portions.” What’s going on in Frances’s life that makes her feel this way?

Thank you! She is getting married, which means bringing her family together. In this case, at her house. She loves them, but one member in particular has been in her home for too long. That would be Daisy Price, her mother. Daisy managed Frances’ life the last time she was single, and she doesn’t see why she shouldn’t do so again. Frances disagrees. When you add her father, her brother, and Aunt Hetty into the mix, it’s no wonder she wishes she and George had eloped.

This is a murder mystery series, so there must be a body. Set the scene for us, please. Who is the victim on this occasion?

The dearly departed is James Connor. He was an Irish immigrant who made an enormous fortune in the Nevada silver mines—owning them, that is. With his wealth and power, he’s used to getting his own way and has no qualms about bullying people to do his bidding. He has few friends, many enemies, and one man he’s actually feuding with—Peter Bainbridge. Connor and Bainbridge have kept their fighting to character assassinations. Both employ agents to spy on their foe and report any unseemly or embarrassing news to the papers. The public has been enjoying reading about the follies of these two powerful men for years. Though they came to blows once, their animosity would never lead to murder—would it? Another of Connor’s enemies might have murdered him, thinking Bainbridge would be blamed. Unfortunately, it’s Frances’ brother, Alonzo, who is caught with the murder weapon when Connor’s body is found.

The long-suffering Inspector Delaney, who has endured a good deal of what he sees as interference from Frances and George, is back in this book. How would you describe him?

Long-suffering is a good start. Delaney is a seasoned pro, capable of handling any murder investigation. Frances and George may get in his way, but they do come in handy. They have access to the aristocracy, who often refuse to speak with the police, and they don’t have to operate strictly within the law—both attributes Delaney takes full advantage of. He made it clear that his patience has its limits when Frances and George pushed him too far in A Fiancée’s Guide. They may be chastened, but Frances’ father, who arrives to torment Delaney in A Bride’s Guide to Marriage and Murder, is another story.

This novel just came out. Are you already planning another Countess of Harleigh mystery?

Yes, A Newlywed’s Guide to Fortune and Murder releases next year. This time Frances finds herself in the middle of an intrigue when she agrees to sponsor Lady Wingate’s niece, Kate, for a presentation to Queen Victoria. Since her husband’s death, Lady Wingate has been unwell and hasn’t left the house for months. Her friend, Lady Esther, is convinced one of the woman’s stepchildren is drugging her and tapping into her fortune. Kate isn’t above suspicion either. She’s about to enter high society and stands to gain an inheritance upon her aunt’s death. Hundreds of young ladies would kill to be in her shoes. Frances has to wonder if that’s exactly what’s happening. She, George, and Lady Esther join forces to flush out the villain and keep Lady Wingate from following in her husband’s footsteps—directly to the grave.

Dianne Freeman is the award-winning author of five historical mystery novels featuring Lady Harleigh—most recently, A Bride’s Guide to Marriage and Murder. Find out more about her at https://difreeman.com.