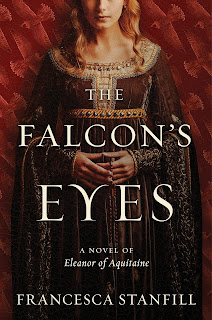 Like Francesca Stanfill herself, I first encountered—at least in a way that caused me to sit up and take notice—Eleanor of Aquitaine in the stunning film portrayal by Katharine Hepburn in The Lion in Winter (1968). Alternately conniving, coquettish, contemptuous, and loving, Hepburn held the eye every moment she was on screen, and only Peter O’Toole as her equally conspiratorial and estranged husband Henry II had a hope of standing up to her. Just writing this makes me want to watch the movie again.

The real Eleanor was every bit as complex, both admired and reviled in her own time. For reasons explained in our New Books Network interview,  Francesca Stanfill chose to approach her main subject by focusing on a fictional young woman in The Falcon’s Eyes. Read on to find out more.

As usual, the rest of this post comes from New Books in Historical Fiction: 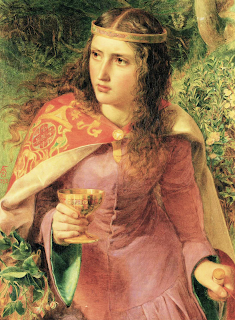 Twelfth-century Europe was not a good time or place to be born female. Even queens had few rights, garnered little respect, and were tolerated largely for their ability to produce male heirs—preferably in quantity and without exhibiting any unfortunate qualities such as independence or intelligence. One notable exception was Eleanor of Aquitaine, queen of England thanks to her marriage (following a scandalous affair and divorce) to Henry II of England—although Eleanor spent many of her later years imprisoned by her no longer loving husband, who suspected her of conspiring with their sons against him.

In this engrossing novel, Eleanor appears first as a shining if distant example for Isabelle, a young countess whose impoverished family is delighted to marry her off to the wealthy if less distinguished Gerard de Meurtaigne. Isabelle initially welcomes the match, but her new husband soon shows a disturbing need for control over his dependents, including his wife. Budding friendships with her maid, her steward, and even the noble Lady Fastrada attract Gerard’s ire, leaving Isabelle yearning for the one sure escape available to medieval women: the convent. Specifically, she longs to join the convent at Fontevraud, which attracts both nuns like Lady Fastrada’s sister and well-endowed laywomen in search of a quiet refuge. But she never expects to find herself face-to-face with Eleanor of Aquitaine herself.

Francesca Stanfill’s multilayered story offers a rich and absorbing picture of medieval life at all levels, from the sorceress living in a hut in the woods to the falcons’ mews and the exigencies of travel. Her sure hand and light touch make this both a memorable and an enjoyable read.