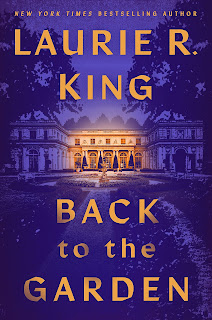 I have loved Laurie R. King’s Russell and Holmes series since I first stumbled over The Beekeeper’s Apprentice in a bookstore (remember those?) back in the early 2000s. The voice of fifteen-year-old Mary Russell, crossing the Sussex Downs with her nose in a book and almost falling over a much-older Sherlock Holmes, grabbed my attention immediately, and I remain a fan.

I had the fun of chatting with Laurie on the New Books Network when Russell’s twelfth adventure came out, and I’m delighted to host another interview with her about her latest novel, Back to the Garden—especially since the technology gremlins were having their fun with us during that earlier interview. Read on to find out more about the exceedingly eccentric Gardener family, the lingering effects of turning a wealthy estate into a 1970s commune, and King’s appealing new detective, Rachel Liang.

Inspector Raquel Liang of the San Francisco Police Department has reached a crossroads in her career. A recent incident ended with her transfer to the Cold Cases Unit and strict instructions to do everything by the book from now on if she wants to keep her job as the SFPD’s psychological investigator. So when news comes of old bones found under a concrete slab at the spiffy Gardener Estate in San Mateo County—a modus operandi associated with a serial killer from the 1970s known as the Highwayman—Raquel finds herself dealing with a case outside her jurisdiction but definitely within her area of expertise.

An added incentive for Raquel is that the Highwayman has just been identified, but he’s in the hospital with terminal cancer—and even after fifty years, he’s still playing games with the law. If the police can identify one of his victims, he will cooperate by supplying information on another, unknown to them. But time is running out, and more than a dozen victims remain unnamed. The body at the Gardener Estate may therefore answer the questions of two grieving families.

Interspersed with Raquel’s search for information on the victim, we follow the events preceding the murder in 1979, when—for reasons explained in the novel—the pristine Gardener Estate hosted a hippie commune devoted to organic gardening, free love, and a steady supply of drugs. As we move back and forth between past and present, the complex story of one exceedingly troubled family slowly emerges, the link between the commune and the Highwayman is revealed, and Raquel’s commitment to do everything by the book is tested—until one final, dramatic twist forces her to decide what matters most.