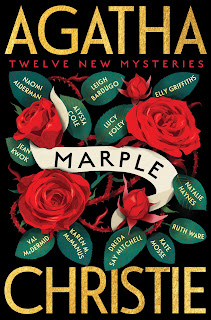 Like many others, I have long been a fan of Agatha Christie—especially her creation of Miss Jane Marple. At one time or another, I have read all the Marple books, most of them more than once. So the idea of twelve new mysteries written by a collection of accomplished authors immediately appealed to me as both a reader and a novelist. But interviewing twelve authors posed a technical challenge. So the publicist and I came up with the idea of asking a single question and inviting authors to send their answers. Not everyone chose to participate, but at least half did. So here are some of the thoughts behind Marple: Twelve New Mysteries.

But first, the book summary.

One doesn’t stop at one murder...

Jane Marple is an elderly lady from St Mary Mead who possesses an uncanny knack for solving even the most perplexing puzzles. Now, for the first time in 45 years, Agatha Christie’s beloved character returns to the page for a globe-trotting tour of crime and detection.

Join Marple as she travels through her sleepy English village and around the world. In St Mary Mead, a Christmas dinner is interrupted by unexpected guests; the Broadway stage in New York City is set for a dangerous improvisation; bad omens surround an untimely death aboard a cruise ship to Hong Kong; and a bestselling writer on holiday in Italy is caught in a nefarious plot. These and other crimes committed in the name of love, jealousy, blackmail, and revenge are ones that only the indomitable Jane Marple can solve.

Bringing a fresh twist to the hallmarks of a classic Agatha Christie mystery, these twelve esteemed writers have captured the sharp wit, unique voice, and droll ingenuity of the deceptively demure detective. A triumphant celebration of Christie’s legacy and essential reading for crime lovers, Marple is a timely reminder why Jane Marple remains one of the most famous detectives of all time.

And now, the question—and the authors’ answers.

What inspired your particular story, and was it a challenge to blend your own voice with Agatha Christie’s?

Alyssa Cole: My story, “Miss Marple Takes Manhattan,” has her traveling to New York City to see a stage adaptation of one of her nephew Raymond’s novels. It was also inspired by the somewhat bittersweet undercurrent of the later Marple novels, where she is undergoing the mundane decline of being elderly, very much aware of it, but also still has what it takes to investigate and solve mysteries!

My story is an homage to the fact that Christie is the most successful female playwright ever; I figured if I was going to bring her to Manhattan, theater was a great backdrop to the mystery! It was challenging, but also fun! I focused on the aspects that stood out to me from Christie's writing—the humor, the subversiveness hidden by the presence of an elderly British woman, and the observational nature of Miss Marple. These were the aspects that I connected with most, and that I then tried to convey through my voice and writing style, but following her general lead.

Jean Kwok: I was inspired by Agatha Christie’s A Caribbean Mystery while writing my story, “The Jade Empress,” in which Miss Marple meets an elderly Chinese gentleman and his daughter on the deck of the Hong Kong–bound cruise ship The Jade Empress. The next morning, it is revealed that the gentleman has died of poisoning. Suspicion falls on his caretaker, a Chinese woman who performs all sorts of unusual rituals, but the daughter is certain that someone else must be to blame. When the caretaker’s body is discovered the next day, it’s up to Miss Marple to uncover the truth.

It was a challenge to attempt to channel Christie, of course, but it was also a true pleasure. I loved trying to hear Miss Marple in my mind. She has such a delightful, wry, and humorous voice. It also made me appreciate how brilliant Christie was at plotting, especially the ways in which she would ensure that the reader had all the clues they needed to solve the mystery without making anything too obvious.

Ruth Ware: I always felt aggrieved that while Poirot has not one but two Christmas stories, Miss Marple doesn't really have a proper one—just a rather sad murder that happens while she's Christmas shopping. I know that Christie loved Christmas—she wrote a long essay about her appreciation of a proper country Christmas—and I felt a little sad that Miss Marple never got to enjoy a real St Mary Mead Christmas in fiction, so I wanted to give her one!

Lucy Foley: My story was inspired by Sussex, the part of England I come from, and the rather pagan goings on that can still be found in several of the local villages and towns! I was certainly a little nervous about stepping into the great Agatha Christie’s shoes, but reading and rereading all of the Marple books and stories and really immersing myself in all things Marple helped hugely with getting the tone right and feeling confident writing about that world.

Kate Mosse: Although Christie’s Miss Marple appears in a handful of short stories, and then her first full length novel in 1930 (The Body in the Library), most of Jane Marple’s appearances happen in the time after the Second World War when life in England was changing quickly, and sometimes bewilderingly. Like many of my fellow contributors, I reread all of the Marple short stories and novels before starting to write, looking for biographical clues to Miss Marple’s life. Once I realized Jane Marple had an uncle who was a canon in Chichester Cathedral, the city where I grew up and live, I decided to set my story there in the years after the end of the war when the National Health Service had just come into being. “The Mystery of the Acid Soil” is a story of two older women, Jane Marple and her friend Emmeline Strickert, who discover a murder that no one else had even realized had taken place. The writing was a joy from start to finish, and I hope that the story will not only please die-hard Marple fans like myself, but also introduce a new generation of readers to the one and only Miss Marple.

And thank you to all the authors who participated in this Q&A. May you have many readers!