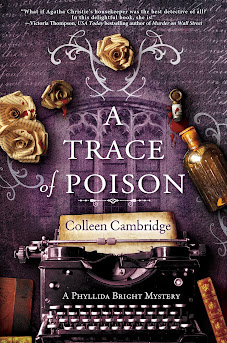 My mother was a huge fan of Agatha Christie. I grew up around those novels—often in multiple copies, because the publishers changed the titles over the years, and it wasn’t always clear which novels were new and which recycled, so to speak. Although my personal favorite was always Dorothy L. Sayers, especially after Harriet Vane joined Lord Peter in Strong Poison, I happily devoured every one of Christie’s classics that I could get my hands on.

I wasn’t quite sure, when Kensington Books pitched me on an interview with Colleen Cambridge, that a new series based on Agatha Christie’s fictional housekeeper was really a good idea. How could the new books compete with the old?

But having read two, I can say that they do. In some ways they even surpass the originals by redirecting their focus to the “downstairs”—that is, the servants, whom Phyllida manages with the sometimes assistance/sometimes animosity of Mallowan Hall’s butler, Mr. Dobble. It all gives the story a modern twist that is very refreshing. So don’t just indulge yourself. Listen to our interview at the New Books Network to find out more about this project before diving in.

Agatha Christie hardly needs an introduction. The Queen of Mystery has reigned since the 1920s, and the recent release of films based on her books shows that her popularity is in no danger of waning anytime soon. It takes a certain audacity to create an amateur detective who, while managing Christie’s household, outpaces her employer in solving crimes. But Colleen Cambridge pulls off this task with aplomb. In a nod to one of Christie’s best-known and most highly regarded novels, the series opens with a body in the library at Mallowan Hall, the rural estate where the author lives with her second husband.

Phyllida—who admires Hercule Poirot, Christie’s most famous creation—seeks to apply his principles of detection to that dead body in the library, and she succeeds admirably. When the second book, A Trace of Poison, begins, Phyllida is organizing a village celebration aimed at raising the necessary funds to repair the roof of an orphanage run by the local Catholic church. Four famous mystery writers—Dorothy Sayers, G.K. Chesterton, Anthony Berkeley, and Christie herself—have agreed to sign copies of their books and to award a short-story prize guaranteeing international publication to one lucky local writer. But at the reception on the first evening, someone is murdered. The stolid but unimaginative police are called in, and again it is up to Phyllida to find out what really happened.

There can be few things more fun to write than fiction about other writers, and it’s clear that Cambridge is having a blast with every tongue-in-cheek reference. The crimes are inventive, the solutions satisfying, but at least as interesting are Phyllida’s interactions with her staff and the villagers of Listleigh. She has her flaws, and we learn early on that she has secrets. At the same time, she is observant, caring, perceptive, and daring, and watching her figure out the clues that befuddle even the police is pure joy.