This will sound strange—perhaps incredible—but my cat loves Beethoven, the Seventh Symphony in particular. Sir Percy and I discovered this quite by accident when he was playing it late one night and she started complaining, loudly, when it ended. Since then, it’s the one piece of music guaranteed to calm her down when she starts roaming around looking for trouble. You can see her here, riffing on the music as it emerges from my computer. 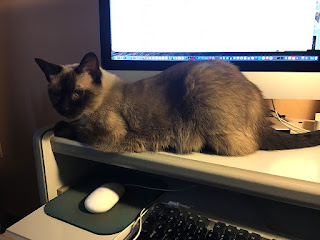 So naturally, when I heard that Patricia Morrisroe had written a novel about the woman to whom Beethoven dedicated the “Moonlight” Sonata, I wanted to find out more. It would have been great to talk with her for New Books in Historical Fiction, because she herself has a fascinating history, as you can see from her bio, below. But I had no space in my schedule at the right time, so we settled on this written Q&A instead.

Read on to find out more, and don’t miss the Five Directions Press Books We Loved in October 2020 link, where I explain in more depth what I loved about this exploration of the under-appreciated life of Countess Julie Guicciardi.

Based on your bio, you have done a lot of writing in your life and have even published several books, but this is your first novel. How did you make the switch to fiction?

It happened purely by chance. An editor mentioned that Beethoven had been in love with a young piano student and thought it had the makings of an interesting novel. I’d never thought of doing historical fiction but figured it would be compatible with my skill set. I was accustomed to doing research, and with Beethoven I had a real-life character whose chronology I could follow. Dialogue came fairly easy because after interviewing hundreds of people over the years, I was attuned to listening to different voices. Since my writing has always been rooted in the contemporary world, it was challenging to suddenly find myself in the early nineteenth century. But I traveled to both Vienna and Naples, where the story takes place, and also read everything I could about the period. I’ve always been interested in fashion, so once I saw pictures of the clothes and hairstyles, it helped bring the characters to life. At one point, Julie cuts off all her hair to emulate the fashionable “Titus coiffure.” That gave me an insight into her personality. And, of course, listening to Beethoven’s music was essential. 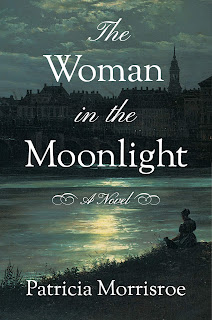 And what drew you to the story of Julie Guicciardi?

Of all the women in Beethoven’s life, Julie is among the most mysterious. I knew that Beethoven had dedicated the “Moonlight” Sonata to her and that he’d confessed his love for her in a letter to a friend. I also knew that her portrait miniature was discovered in a secret compartment in his desk drawer after he died. The clues were few but tantalizing. They fed my imagination without overwhelming it.

While I was working on the book, #MeToo was very much in the news. If women in the twenty-first century could be subjected to such abuse, what was it like for a nineteenth-century woman? It was important to me that Julie be strong and never lose her agency, despite some of the appalling mistreatment she suffered. Beethoven is such a titanic figure that it’s hard not to give him the starring role, but I made Julie the narrator so the reader could see him through her eyes.

Who was Julie? How would you describe her past and her personality at the moment we meet her? What does she want from life?

Julie is a smart, witty young countess from a modestly well-off family. Money is central to the family dynamics. Though Julie’s mother grew up on a grand Hungarian estate, her brothers inherited the various properties, leaving Julie’s mother with a modest annual stipend. Julie’s father has a distinguished lineage, but as a court chancellor, he doesn’t make enough to meet his wife’s needs. Her dissatisfaction leads to an event that will change Julie’s life. When we first meet Julie, she is eighteen and, like most aristocratic young woman, obliged to take music lessons. Unlike the cello, which was held between a woman’s legs, the piano was considered the most ladylike instrument. Julie, in her forthright way, asks Beethoven to be her teacher.

Beethoven, even as a young man, was not exactly the romantic hero type. What draws Julie to him?

Beethoven was considered the rock star of his day. While not traditionally handsome, he had enormous charisma, especially when playing one of his soaring improvisations, or engaging in a musical duel with a visiting virtuoso. Even listening to his music today, I’m blown away by his maniacal force and power and also by his sudden tenderness. I tried to imagine what it was like for Julie to hear that music live and to understand that the person playing and composing it was going deaf. Julie is drawn to him because not only does the music exert a spell—Beethoven is the siren to Julie’s Odysseus—but he is also one of the great geniuses of western civilization. How could she not fall in love with him?

What draws him to Julie, so that he dedicates the “Moonlight” Sonata to her?

Julie is so beautiful that she’s known as “La Bella Guicciardi,” and Beethoven has an eye for a pretty face. But she’s also one of the few women who can stand up to him. He respects her intelligence, although he is loath to give her—or anyone—a compliment. He’s so caught up in his music that it’s difficult for him to show any sensitivity to another person. Beethoven dedicates the “Moonlight” Sonata to her, because they’ve suffered through something that inspires him to write the first movement—a funeral march.

You mention in the back of the book that you became caught up in Julie’s story, even after her early relationship with Beethoven is interrupted. Indeed, many of the most fascinating parts of the story come later. Without giving away spoilers, what can you tell us about Count Robert von Gallenberg and Count Friedrich Schulenberg?

Robert Gallenberg was a composer of ballet music and Beethoven’s rival for Julie’s affections. He is everything Julie’s mother wants in a son-in-law—handsome, monied, and titled. After he and Julie move to Naples, he works at the Theater San Carlo for the impresario Dominico Barbaja, a former coffee-house waiter, who discovered Rossini and the drink we now call “cappuccino.” When Barbaja takes over Vienna’s Kärntnertor Theater, Gallenberg helps him run it, giving Julie an opportunity to be in the audience when Beethoven premieres his Ninth Symphony. As for Friedrich Schulenberg, I kept picturing him as Robert Redford in Out of Africa. He’s handsome, elusive and independent, a career diplomat who operates in a sophisticated world of spies, affairs, and intrigue. Julie loves him, but in a different way than she loves Beethoven. The two men represent two different types of passion.

Do you have other fiction projects in mind?

I have some ideas floating around, but after dealing with Beethoven, it’s hard to let him go. Musicians have told me the same thing. He grabs you by the throat and demands your full attention. Because he’s so brilliant, you keep hearing different things in the music, so it’s a life-long process. But since I’ve already given him five years of my life, I think we’ll be splitting up soon. I’ll still listen to his music—but not as a nineteenth-century woman.

Patricia Morrisroe is the author of Mapplethorpe: A Biography, Wide Awake: A Memoir of Insomnia, and 9½ Narrow: My Life in Shoes. She was a contributing editor at New York magazine and has written for many other publications, including Vanity Fair, the New York Times, Vogue, the London Sunday Times Magazine, Travel + Leisure, and Departures. The Woman in the Moonlight is her first novel. Find out more about her at http://www.patriciamorrisroe.com.