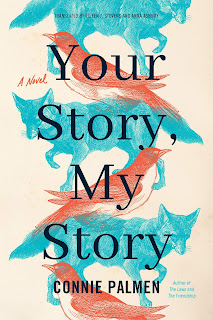 One of the fun elements of writing fiction is the chance to explore hidden facets of a familiar story. This is especially true—although also a particular challenge—when the characters and events in the novel are real, yet the author’s perspective offers new insights on what we have assumed is a familiar, even trite, tale.

The marriage of the poet Sylvia Plath, who committed suicide in 1963, and her husband Ted Hughes (also a poet) is an example of this phenomenon. The subject of a thousand-page biography recently reviewed in the New York Times Book Review, itself the latest addition to a vast literature on the poet’s life and death, Plath has become an iconic figure. Non-scholars passed judgment on her and her husband long ago. Yet in Your Story, My Story Connie Palmen does an exemplary job of overturning our expectations by presenting the couple’s relationship from Ted Hughes’ point of view. Moreover, she succeeds without sugar-coating Hughes’ personality. Issued in English translation just two weeks ago, this is a novel well worth seeking out. Read on to learn more about both the book and its author.

This book is not your first. Is there a theme that ties your prior works together?

When you a write a novel, there is never only one reason to do so; there are a lot of reasons, tangled themes, fascinations, love for a specific genre, love for other novels, the never-ending need to understand more about life and about yourself. The theme that guides a lot of my novels is the sometimes devastating influence of how we talk about other people. After the suicide of his wife, Sylvia Plath, the life of Ted Hughes became the subject of gossip, nasty stories, myths, biographies. It was no longer his.

What drew you not just to Sylvia Plath’s story but to Ted Hughes’ side of it?

When I was mourning the loss of my husband, I read Ted Hughes’ Birthday Letters, published just before his death. I was struck by how poignant and heartfelt the poems were. I felt they pointed to Hughes’ deep love for Sylvia and the pain he endured as a result of her death—a pain with which I could relate. The more I delved into Hughes’ poetry, the more compelled I felt to tell Ted’s side of the story.

And how do you see Ted Hughes, a historical personage who as a literary character must be in part your creation?

While working with my excellent translators, Anna Asbury and Eileen J. Stevens, I described Your Story, My Story as my “Judas” novel. The Judas connection is crucial here, as my Ted Hughes character states from the beginning that the key events in his relationship with Sylvia were set in stone before they ever met. In other words, the trajectory of their marriage was fixed from their first encounter. Does that absolve him of all guilt in this tale? Was he simply an unsuspecting accomplice? Or does this make Sylvia less of a victim? I have tried to relate this story impartially, leaving room for ambiguity in spite of narrating only one side. It is up to each reader to decide.

How do you understand Sylvia Plath, her personality and her suicide?

As a writer, philosopher, and as Ted Hughes, I try to understand Sylvia Plath’s suicide, and suicide in general. In the novel Hughes acknowledges in her personality a radical thread, a longing for purity, and a willingness to sacrifice her false self to become more real and clean. This longing might be a part of understanding her, but people are complex and there is never only one explanation for our behavior.

No story is one-sided. What were the strengths and weaknesses of their marriage, in your view?

Hughes was not a monster, and Plath was not a saint.

What is most important for potential readers to know about this story, as you tell it?

Ted Hughes and Sylvia Plath were one of the most famous romantic couples in modern Western literature. In countless biographies of Plath, she is given the status of martyr and Hughes that of a traitor and murderer, while Hughes was reviled by strangers and even sued by people he once considered his friends.

I wanted to describe the thoughts, fears, and incantations of this husband, and his deeply tragic bond with the woman who would come to define his life.

You write in Dutch. The translation seems very fluid and well done, but does the act of translation change a literary work in some way?

A good translator understands how and what a writer wanted to tell, and she preserves the essence of a novel. That is the wonder of reading your own book in another language: it is completely different and at the same time exactly yours.

Are you already working on another project? What can you tell us about it?

I am still doing research for my next novel, and I wrote essays on Vivian Gornick, Joan Didion, and Sylvia Plath. It is a continuation of a small collection of essays I wrote on famous, talented, and rather destructive women like Patricia Highsmith, Marilyn Monroe, Marguerite Duras, and Jane Bowles.

Thank you so much for answering my questions. 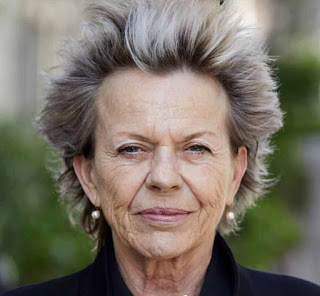 Connie Palmen was born in Sint Odiliënberg, the Netherlands, and studied literature and philosophy at the University of Amsterdam. She is the author of The Laws, voted the European Novel of the Year and short-listed for the 1996 International IMPAC Dublin Literary Award; The Friendship, winner of the AKO Literature Prize; All Yours; Lucifer; and the autobiographical works I.M.—now a television film broadcast in December 2020—and Journal of a Merciless Year. Your Story, My Story, published in Dutch as Jij zegt het in 2015, won the prestigious Libris Prize for Literature and was short-listed for several other literary awards. Amazon Crossing published the English edition in January 2021. Ms. Palmen currently lives in Amsterdam. For more information, see http://www.conniepalmen.nl.
Posted by C. P. Lesley at 9:00 AM