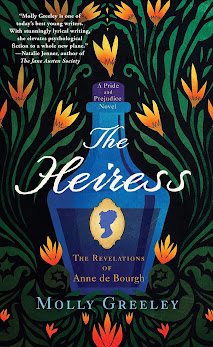 A little over a year ago, I published a written Q&A with the author Molly Greeley on this blog. That was supposed to be a podcast interview, but as luck would have it, the workmen who had spent the previous two weeks doing everything but putting my deck back together (after demolishing it in no time flat) arrived, saws and hammers in hand, the day before I was supposed to talk with her. She kindly agreed to reschedule, since it was clear we would barely be able to hear each other—and our listeners even less so. I vowed to host a conversation about both novels when the second one appeared.

That has now happened. William Morrow published The Heiress: The Revelations of Anne de Bourgh on January 5 of this year. Molly and I spoke well in advance of the release, to avoid delays caused by the annual winter and New Year’s holidays, and you can hear us talking on the New Books Network. The post below, which accompanies the interview on New Books in Historical Fiction, provides an introduction to both novels. 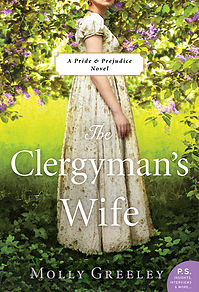 The world created by Jane Austen in Pride and Prejudice has established a place for itself in contemporary culture that few other novels can match, yet amid the countless spinoffs, some stand out. Molly Greeley seems to have a special gift for creating novels that, although based on Austen’s creations, take on a life of their own.

In 2019’s The Clergyman’s Wife, Greeley imagined how the marriage between Charlotte Lucas, the friend of Austen’s heroine Elizabeth Bennet, and Mr. Collins, Austen’s risible antagonist, might have worked out after three years. The Heiress (William Morrow, 2020) takes up the story of Anne de Bourgh, a character who in the original Pride and Prejudice exists mostly as an example of the kind of young woman that novel’s hero, Mr. Darcy, should prefer to Elizabeth, if only in the opinion of Anne’s formidable mother, Lady Catherine de Bourgh.

Now, to anyone familiar with Lady Catherine, the thought of being her daughter is itself enough to cause shudders of alarm, but on the surface, Anne has a privileged life, including the right—rare for a woman in eighteenth-century Europe—to inherit her father’s estate. In this, she occupies the opposite position from Charlotte Lucas, who married Mr. Collins solely to avoid becoming an elderly, unwanted spinster living in genteel poverty.

But all is not well in Anne’s world, either. A fractious but healthy baby, she undergoes “treatment” for what we assume is colic that leaves her addicted to laudanum, an opiate. Her father wants to wean Anne of the drug, but her mother insists on following the advice of the local quack even as Anne becomes more listless and emaciated. A governess manages to awaken Anne’s interest in poetry and mathematics, but it’s only when Anne herself awakens to the dangers of laudanum and decides to rid herself of her addiction, no matter what it costs her, that she begins to grow into her inheritance.