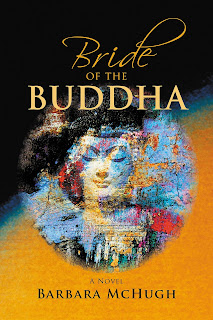 Since I first started this blog in June 2012—can it really be eight and a half years?—I have never missed a Friday post. Perhaps it’s weirdly fitting that my one deviation (so far) involves a fascinating interview with Barbara McHugh, Buddist practitioner and teacher, about her recently released debut novel, Bride of the Buddha. An unanticipated complication to an otherwise-successful (and planned) surgical procedure, and my carefully maintained blog schedule went out the window. Talk about impermanence!

Read on to find out more about this wonderful exploration of a woman whose life has been reduced, at best, to a footnote in a legend. Heartfelt thanks to Barbara and her publicist, Holly Watson, for their patience as I belatedly got the post online. And definitely seek out Bride of the Buddha, available as of Jan. 26, 2021, from Monkfish Book Publishing Company.

What drew you to the story of Yasodhara, the bride of your title?

A couple of things. So many women I knew, including myself, had difficulties with the prospect of following the Buddha, a man who’d abandoned his wife and infant son to go off and seek Enlightenment. I wanted to explore that story and understand Siddhartha’s actions as an aspect of the overall message that the myth conveys. The legend is that the Buddha was a prince named Siddhartha whose father wanted above all for him to become a great king, so he made sure his son had the most pleasant life possible as a prince, where he never came in contact with sickness, aging, or death the entire time he was growing up. The Buddha-to-be married the beautiful princess of his dreams and gave birth to a male heir, but everything fell apart when he for the first time saw a sick man, an old man, a corpse, and finally a holy man, who provided a solution to his problem of existential terror. These “four heavenly messengers,” as the texts describe them, motivated Siddhartha to leave home, abandoning his wife and child—as well as his parents, extended family, and his whole community—and embark on a quest for enlightenment.

This story, while it may have some roots in history, is a myth. For one thing, the historical Buddha wasn’t a prince but most likely the son of the leader of one of the oligarchic clan-republics in North India at the time. Also, the notion that his father could protect him from all knowledge of sickness and mortality until he was twenty-nine years old is absurd. So what was going on with these distortions? My explanation is that the myth demonstrates the crucial Buddhist doctrine that even the most perfect life is unsatisfactory—not that life consists of nothing but suffering (a common misinterpretation of Buddhist thinking), but that it is permeated with stress and ends in death. Siddhartha, the future Buddha, is depicted as living the ideal life for a person in his times: he’s male, a prince married to a beautiful woman whom he truly loves, and the father of a son—so important in a patriarchy. And yet his life becomes unbearable when he faces the truth of sickness and death.

I think the power of Siddhartha’s story comes partly from his idealized identity: if the Buddha had just been some dissolute rich guy sick of his life, people could easily dismiss his reasons for seeking spiritual answers as the efforts of a wastrel to compensate for his many failures. But the Buddha was a success in all phases of his worldly life, and therefore his decision to leave home implies, as he states in the First Noble Truth, that suffering is inevitable in all lives, even the happiest and most productive. At the same time, in my novel I wanted to go deeper into the abandonment issue. I wanted to portray the possibilities—not only for Yasodhara but for all women—beyond simply being the victim in a myth.

I also wanted a perspective on early Buddhism from the point of view of a woman—and one who knew the Buddha intimately.

We first meet Yasodhara at the moment Siddhartha leaves her to pursue his religious quest. Why did you start the story there?

I started with that event because so many people are familiar with this episode. I wanted to prepare the reader for Yasodhara’s version of what happened, which would sometimes diverge significantly from the traditional stories. At the end of the prologue, I have Yasodhara state this outright and hint at why her divergence is the real truth.

We then go back in time to a crucial incident in Yasodhara’s childhood, involving her sister Deepa. What do we need to know about this event?

This incident, although it introduces and conforms to Yasodhara’s basic background (her parentage, her socio-economic situation, her relationship to the Buddha’s Sakyan clan, and the existence of dog-duty ascetics and other wandering holy persons of the time) is entirely fictional. It’s important to the novel because it sets up Yasodhara’s lifelong spiritual quest as initially unrelated to the Buddha. I wanted the story to belong to her, and not be the Buddha’s story as seen through her eyes.

And how would you describe Yasodhara as a personality?

She is someone passionately in love with the world and people in it. At the same time, she knows from an early age the horror and desolation of death, and she wants somehow to transcend mortality. Her spiritual aspiration results in her decision to conceal her gender in order to join the Buddha’s all-male community, becoming the monk historically known as Ananda. But her worldly passion, for much of her life, translates into anger at the injustices suffered by the people around her. As she matures spiritually, she increasingly manages to transform her anger into helping others, yet her passion still gets her into trouble, and in later years she has to come to terms with anger as well as grief if she is to attain her final enlightenment.

We already know that she marries Siddhartha, who will become the Buddha. How does that come about?

The suttas (in Sanskrit, sutras) and later legends portray the marriage as an arranged one, in the sense that Siddhartha would at most have had a choice among pre-selected candidates. In all likelihood, he would have married one of his cousins, as he does in the novel.

And what is your view of him, as a literary character? Was it difficult to write such a venerated figure?

Actually, I had fun writing about Siddhartha. I had to make the pre-enlightened Buddha worthy of Yasodhara’s love; I also wanted him to embody worldly values at their best. But rather than following the official, untenable myth where Siddhartha doesn’t even know that aging, sickness, and death exist, I have him simply in denial about these things. Until Yasodhara’s pregnancy forces Siddhartha to come up against mortality, his denial takes the form of avoiding all morbid thinking, while living in the moment as much as possible—which, ironically, some people mistake for the essence of Buddhism.

Creating the enlightened Buddha was more of a challenge. I had to clear my mind, see what my intuition would come up with and then carefully read and rewrite, using as much scripture as possible and proceeding with humility.

The book is presented as the diary of the monk Ananda. Tell us a little about him.

Ananda was a monk, one of the Buddha’s many cousins, who became the Buddha’s personal attendant for the last twenty-five years of the Buddha’s life and who persuaded the Buddha to admit women into his monastic community. I became curious when I discovered some striking peculiarities in the Buddhist texts that have to do with him. For instance, it makes little sense that the Buddha needed Ananda to convince him to ordain women. Ananda was a junior monk who hadn’t even achieved Enlightenment, and he used arguments that had to have already occurred to the Buddha. Another perplexity is that in spite of Ananda’s privileged relationship to the Buddha, he was the only close associate of the Buddha who failed to become enlightened in his teacher’s lifetime. My novel explains both of these anomalies, but I don’t want to include too many spoilers here. Obviously, my fictional solution involves portraying Yasodhara and Ananda as the same person.

Are you already working on another novel?

Yes. It takes place 2,500 years in the future in a world controlled by women. 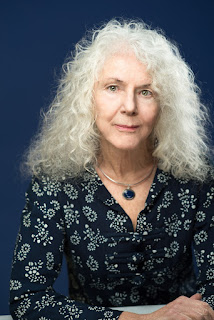 Barbara McHugh, PhD, is a Buddhist practitioner with a degree in religion and literature from the University of California, Berkeley. She is a published poet, writing coach, and book doctor. Her research for this book includes the study of many Pali texts in translation and extensive travel in India. Learn more about her and her work at https://www.barbaramchugh.com.