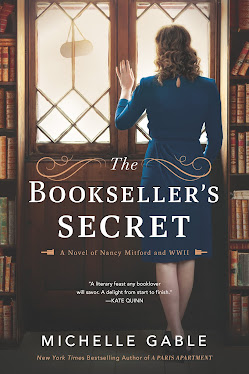 It’s probably fair to say that Nancy Mitford and her sisters are not quite the household names in the United States that they are in the United Kingdom—and were, even during my childhood there. Too bad, because they were a fascinating family who participated (on all sides) of the twentieth century’s two great conflicts—the rise of communism and the Second World War.

Michelle Gable knows all about them, and they star in her latest novel, The Bookseller’s Secret. Nancy, in particular, emerges from her period working in the Heywood Hill bookstore with experiences that will no doubt surprise many readers, as well as a manuscript that will launch her into literary celebrity. Read on to find out more.

You mention in your Author’s Note that you have long wanted to write a novel about Nancy Mitford. What is it about her and her family that made you yearn to fictionalize their story?

I’ve adored Nancy Mitford since reading The Pursuit of Love … probably back when I was in college! I knew the novel was based on her family but didn’t fully appreciate the full breadth of the Mitford craziness until I picked up The Sisters by Mary S. Lovell about twenty years ago.

I could yammer for hours about the mind-boggling Mitford girls but, in short, Nancy was one of six beautiful sisters (and one lonely brother): Nancy the novelist, Pamela the countrywoman, Diana the Fascist (and “most hated woman in England”), Unity the Hitler confidante, Jessica the Communist, and Deborah the Duchess. The Mitford girls were so notorious that their mom often “joked” she got nervous whenever a headline began, “Peer’s daughter…”

This book focuses on a specific time in Nancy’s life, between 1942 and 1945 (although you do tell us what happens to her beyond that). Why zoom in on that period of her life?

Nancy lived a long and often complicated life, so it was necessary to zero in on one time period. When tossing around ideas for this book, my agent suggested I write about Nancy’s time at the Heywood Hill bookshop in London, in the 1940s. I love any novel set in a bookstore, as well as new “takes” on the World War II genre, so this seemed like a perfect fit. Even better that I was struggling with my fifth novel, and Nancy was struggling with her fifth while she was working at the shop. She ended up publishing The Pursuit of Love shortly after the war ended up, and it made her a star.

The Bookseller’s Secret is not, however, only a tale of the 1940s. Tell us about Katharine Cabot and why you decided to tell her story in parallel with Nancy’s partially fictional one.

All my books have dual timelines—I like the challenge! Also, I’m forever intrigued by the connections and similarities between past and present.

Unlike the characters in the historical portions of the novel, Katie is entirely fictional. While we have vastly different backgrounds, Katie does share much of my writerly angst. Through Katie, I worked out many of my own career frustrations, to the point my agent and editor asked me to please tone it down!

In the book, Katie is a struggling writer who takes a break from her tumultuous personal life to visit her college roommate in London. She’s also hoping for some writerly inspiration. Katie’s friend lives in Mayfair, around the corner from the famed Heywood Hill bookshop, where, as I mentioned, Nancy Mitford worked during the war. People think of Nancy Mitford as being from a titled, upper crust family, which she very much was, but she was constantly in need of money. The Mitfords were a crumbling sort of gentry. In the novel, Katie is shocked to discover this tidbit and it’s the bookshop that unites these disparate characters and time periods.

Katharine, when we first encounter her, is recovering from one of those dinner parties that are excruciating to participate in but funny to read about later. What do we find out about her and her issues in this early scene?

That she has a lot of them! To name a few: she and her fiancé have broken up, she’s struggling with her writing career, and she has a deep inferiority complex about her sister and is vaguely “scared” of several family members. Basically, she’s looking to fly under the radar at Thanksgiving dinner but is instead thrown into the spotlight.

She’s also getting over a long relationship with Armie. She flees to London and soon runs into Simon Bailey. How would you compare and contrast these two guys?

Armie is a striver and very competitive. He comes from an immigrant family and feels added pressure to “succeed.” Despite their competitiveness, there’s a huge amount of comfort and respect between Katie and Armie because they’ve known each other for so long.

Simon is the sexy new thing but, compared to Armie, he’s a bit more laidback, at times awkward, despite his good looks. Unlike Armie, Simon pursued a career he was passionate about, without much thought to income, even though he certainly did not grow up with a lot of money. Armie comes from a tight-knit family, whereas Simon was raised by a single mom who has many personal problems.

The two men are pretty dissimilar, and I think this is what wakes Katie up to the idea that perhaps breaking up with Armie wasn’t only the right thing for him, but also for her. He was the literal boy next door, and she viewed him as an ideal partner, mostly because she didn’t really allow herself to consider otherwise.

It’s through Simon—and a chance encounter with the bookseller of your title, recommended to Katharine by her friend JoJo—that the past and present threads intertwine. Can you tell us a bit about those connections?

Because I made Katie Nancy-Mitford-obsessed, it was so easy to have her stumble into that shop and want to dig deeper. I would’ve done the same! Writers are notorious for going down research rabbit holes, and this innate desire helps connect Katie to the past.

Do you already have another novel underway?

Though I vowed no more WWII novels, I couldn’t help myself! My next book will take place in Rome, near the end of the war. It’s based on a woman who created propaganda to feed to the Germans and is an exploration of female friendship as well as how misinformation not only affects those receiving it, but those creating it. 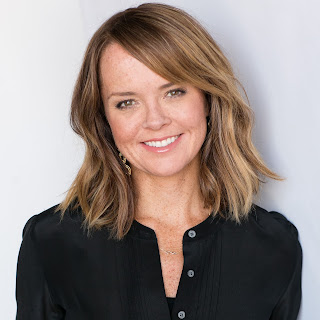 Michelle Gable is the New York Times and USA Today bestselling author of A Paris Apartment, I’ll See You in Paris, The Book of Summer, and The Summer I Met Jack. Her latest novel, The Bookseller’s Secret, came out with Graydon House on August 17, 2021. Find out more about her and her books at https://michellegable.com.