The Necklace That Brought Down a Monarchy

A few years ago, Martha Hoffman, founder and owner of Cuidono Press, sent me Precious Pawn, one of her historical fiction titles set in prerevolutionary France. The topic interests me, so I had every intention of reading it, but life got in the way and I never quite got around to it—until the author’s next book came out a few months ago. Then I did read Precious Pawn, a fictional rendition of an actual eighteenth-century memoir discovered by the author, Mary Martin Devlin, in an archive. In this novel, Diane de Fautrière, the young (as in fourteen-year-old) and beautiful daughter of an ambitious but impoverished nobleman, catches the eye of King Louis XV of France before losing out to Madame de Pompadour. I won’t say more, except that this painting of a court ball in 1745 captures the moment when her fate takes an unexpected turn. 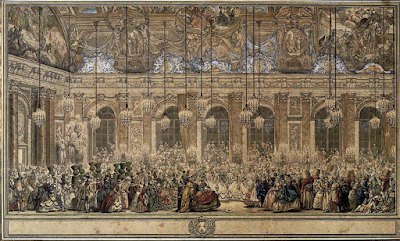 Diane is in every way a young woman of her times, and that setting—the luxurious and often scandalous court at Versailles—is fascinating. Even more fascinating from this reviewer’s perspective is the novel that follows, The La Motte Woman. Its heroine, born only about twenty years after Diane, couldn’t be more different. As I read Jeanne’s fantastical but mostly true story (Jeanne, it soon becomes clear, is not a reliable narrator of her own life), I kept thinking of Becky Sharp, the anti-heroine of William Thackeray’s Vanity Fair—only to discover during my interview with the author for New Books in Historical Fiction that indeed, Thackeray based his character on the real-life Jeanne de la Motte. Read on to find out more about the story—and do listen to the interview, which is a lot of fun and includes a discussion of the first book. But the most fun comes from reading the novel: Jeanne is a character for the ages, and I guarantee that by the time you reach the end, you—like her former lover, Beugnot—will rejoice that she managed to escape the debacle she created.

Jeanne de St.-Rémy has a grudge against the world. Born into the French royal family—if admittedly by a somewhat labyrinthine route—she spends years of her childhood so disinherited and ignored that at the age of six, she is begging in the streets of Paris. A lucky accident brings her to the attention of the Marquise de Boulainvilliers, who adopts the little waif, raises her as a daughter, and helps her prove her claim to be considered a relative of King Louis XV through a legitimized descendant of the previous royal family, the Valois. The marquise even helps Jeanne secure a pension, but Jeanne remains unsatisfied. She will settle for nothing less than full acceptance into the court at Versailles.

Through a series of affairs and a forced marriage to Nicolas de La Motte, who becomes Jeanne’s loyal partner if not the husband of her heart, Jeanne ploughs through all obstacles on her path. Her greatest conquest is the Cardinal-Prince Louis de Rohan, a high-ranking aristocrat whose campaign to regain his influence with the new king, Louis XVI, is repeatedly challenged by a hostile Marie Antoinette. When Jeanne learns of a magnificent diamond necklace, a creation so elaborate and enormous that its purchase price would bankrupt a nation, the stage is set for a scandal that will bring down the very monarchy Jeanne is so desperate to enter. 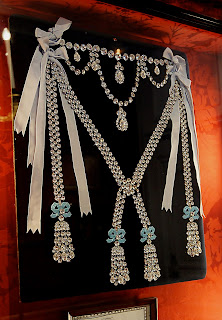 With a keen eye and a vivid appreciation for detail, Mary Martin Devlin creates, in The La Motte Woman (Cuidono Press, 2021), an indelible picture of how three clashing obsessions—Jeanne’s quest for the validation of her heritage, Rohan’s yearning for his appointment as prime minister, and the jewelers’ determination to produce a unique and, in their minds, perfect work of art—intersected to destroy the reputation of Queen Marie Antoinette, with catastrophic results for the French monarchy as a whole.

Images: Charles-Nicolas Cochin, A Masked Ball Given to Mark the Marriage of the Dauphin (1745); The Queen’s Necklace (Reconstructed), photograph © Jebulon—both public domain via Wikimedia Commons.