When History and Fiction Intersect

Many thanks to Joan Schweighardt, who ran this interview with me on the Five Directions Press site today. Alas, three months after Russia’s invasion of Ukraine, the cross-linked post below is as relevant as it was the day it went up.

Your new novel is the fourth book in your Songs of Steppe & Forest series. Can you tell us something about the series as a whole and the newest title, Song of the Sinner, in particular?

The series as a whole explores the boundaries that constrict women’s lives in Tudor-contemporary Eastern Europe—specifically, Russia and the surrounding lands in the 1540s. Unlike my first historical series, where the main characters had arranged marriages—as most people did at the time—in this one I wanted to explore less traditional paths to happiness. These characters embrace love without marriage or emphasize their religious vocations or pursue lovers whom others consider unsuitable. Solomonida, the heroine in Song of the Sinner, strives to balance her love for a man from a lower social class against her belief that she should sacrifice her own needs on behalf of her daughter. Something a lot of contemporary mothers struggle with as well! She also fears that commitment means loss of control over her own fate and even her body, because her first husband was a manipulative brute. 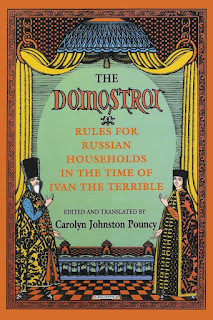 Your Russian-based fiction is an extension of your academic career. Can you tell us the story of how you came to be a scholar regarding all things Russian.

I’ve always loved languages, and when I discovered that my northern New Jersey high school offered Russian, it sounded exotic and fun. So I signed on. When I got to college, I fell in love with the culture and the history—which is a long series of dramatic events worthy of the movies. So when I decided to apply to grad school in history, it made sense to focus on Russia. But I was always more interested in pre-industrial times; hence my specialization in early modern Europe, sixteenth-century Russia in particular. In addition to my novels, written under a pen name to separate them from the academic stuff, I translated and published The Domostroi: Rules for Russian Households under Ivan the Terrible, which is a set of instructions written (probably) in the sixteenth century on how to manage a large urban household, including everything from proper behavior in church to recipes and ways to keep the servants from stealing food and other household goods.

You recently wrote an essay titled The Tangled History of Russia and Ukraine. Which of your novels would you recommend to readers who want to further explore that history from a fictional perspective?

My novels portray a world where what is now Ukraine is firmly situated within the Polish-Lithuanian dual monarchy, as it was in the sixteenth century, revealing the falsehood of current statements that Ukraine is simply a Russian province with no history of its own. They also reveal principles of political life that, despite many changes over the centuries, still operate in today’s Russia—the preference for oligarchy, for example. And they do this in a lighthearted, non-preachy way. I would suggest readers start with The Golden Lynx, which sets the stage for the books that follow. The heroine of that series is a Tatar princess, sent to Moscow without adequate preparation, so she needs explanations of the workings of Russian society that also benefit the reader. The second novel in that series, The Winged Horse, offers a historically accurate view of Crimea very different from anything you might have seen in the news media eight years ago, when the Russians snatched it from Ukraine. (Coincidentally, Winged Horse came out in the spring of 2014, right after the annexation.) The hero of The Vermilion Bird and The Shattered Drum has also spent time in the steppes north of Crimea, in service to a renegade would-be khan.

The other book worth taking a look at in this connection is Song of the Siren, which begins in Renaissance Poland before moving eastward to Muscovy. The heroine of that book, Juliana Krasilska, is firmly convinced that Moscow is a backwater compared to Kraków. That’s not entirely fair, but it does give a clear sense of the separate cultural trajectories of Muscovite Russia and Ukraine, which spent several centuries under Polish influence.

Because you are a historian who has focused all her adult life on a particular part of the world through time, the reader can trust that the settings, clothes, food, weapons, etc. that your characters come into contact with are utterly historically accurate. What about the characters themselves? Do you attempt to get into the minds and hearts of the czars and other personages we might know? Or are they more or less part of the staging on which your fictional characters come alive?

I try to give historical characters the widest berth possible. As a historian, the idea of putting words into the heads and mouths of people who actually lived makes me squirm. It’s not always possible, however, to avoid historical personages entirely. In those cases, I do my best to keep their words in line with their known deeds and emphasize to my readers that we have almost no information about the personal lives of even the best-documented figures in sixteenth-century Russia. That includes Ivan the Terrible himself, although naturally we know more about what he did (or is supposed to have done) than we know about most of his subjects. So in that sense, yes, I restrict the real people to the background and let my fictional characters take center stage.

You have one more book to go in your Steppe & Forest series. Did you know in advance that this series would encompass five books?

I knew from the beginning that the first series, Legends of the Five Directions, would end with the fifth direction (Center). But this series is actually open-ended. I happen to be close to finishing book 5, but I’m working on the plot for book 6, Song of the Steadfast, and I have rough ideas for at least two more books beyond that. Those last two, if I get to them, will move into the 1550s. I can imagine as many as ten, but anything beyond Songs 8 is so hazy as to be almost invisible at this point.

Although Song of the Storyteller is a work in progress, can you tell us a bit about what to expect?

Absolutely. This may be my favorite of the whole series. Lyubov Koshkina, known as Lyuba, first appeared as a six-year-old in The Vermilion Bird, and at the end of that series, she informed me that she was the unnamed narrator of the Legends books as a whole. Here we encounter her just as she is finishing The Shattered Drum and considering what she will write next. She decides to tell her own story: her memories of when, as a sixteen-year-old girl, she was summoned to the first bride show held for Tsar Ivan the Terrible (think The Bachelor, but the prize is a royal crown, not a rose). Her father desperately wants her to win, but Lyuba has fallen in love with a dashing Tatar prince. Her job is to get herself dismissed from the bride show without insulting the tsar while dodging the dirty tricks sure to be played against her by various rivals and their families. And since her best friend, Anna, has also been summoned against her will, Lyuba has to find a way to fulfill her own goals without undermining her friend’s. 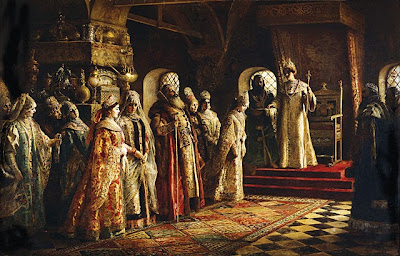 Do the novels in your historical series work as standalone reads?

They do, in the sense that I ensure you can pick up any one of them and know what’s going on without having to have read the preceding books. The historical novels are all connected, though, and people have told me that they benefited from knowing that minor characters in one book were central to earlier ones. Some readers also enjoy catching up with old friends. So if I’m asked, I suggest starting with either The Golden Lynx or Song of the Siren. If you like the first book in the series, then you’ll probably like the others as well.

Do you know yet what you will write next?

I’m three chapters into Song of the Steadfast, but I’m taking a break to work out the political background before moving forward. Each Songs of Steppe & Forest novel centers around a romance—in this case, Anna Kolycheva (Lyuba’s best friend, as mentioned above, and Solomonida’s daughter) and a young man named Yuri Vorontsov—but the books are not only romances. Here the political infighting is between the young tsar’s uncles and his recently acquired in-laws, played out against the backdrop of three devastating fires that struck Moscow between April and June 1547. Once I figure out exactly what happened and how I can fit my fictional characters into the history, I’ll get going again. I’ll also be rewriting parts of Song of the Storyteller this summer so that it feeds seamlessly into the sixth book.