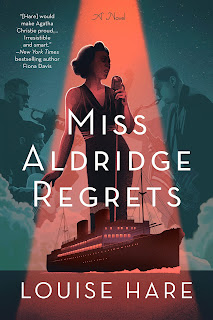 Fortunately, the editors at Berkley didn’t take that approach when presented with Louise Hare’s Miss Aldridge Regrets. Her heroine, Lena Aldridge, is a jazz singer down on her luck. It’s London in the 1930s, and almost everyone is down on their luck because of the Great Depression, but Lena has additional troubles and challenges that send her off on a trans-Atlantic adventure. Too bad that she’s traveling with a murderer …

Read on to find out more.

The main part of Miss Aldridge Regrets takes place on the Queen Mary in 1936. What drew you to this setting and this story?

I wanted to write something fun, and I love the glamour of travel in that period. I was thinking of Agatha Christie’s Death on the Nile and also, although set in a later period, Patricia Highsmith’s The Talented Mr Ripley. I was drawn to flawed characters and those wealthy families who crop up in those twentieth-century crime novels.

The book has such an interesting structure. The first person we meet is actually the murderer, who interjects diary entries throughout the story. Why open the book this way?

Mostly, it was to hook in the reader. I also wanted a dramatic opening! As a reader I always enjoy knowing more than the protagonist so I hope that other readers feel the same. Seeing a little bit of the backstage plotting allows you to see what’s happening when Lena’s not looking. 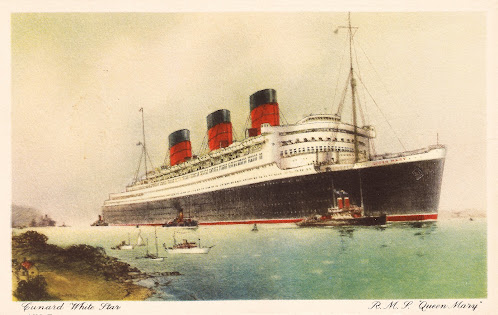 Describe your heroine, Lena Aldridge. What is she like, as a personality, and where is she in terms of her life and career when the novel begins?

Lena is a vibrant but flawed personality! When the novel begins, she’s in a mess. Her father recently died, her career as a singer/actress is going nowhere, and her married lover has just dumped her. She has nothing to lose when a stranger walks into her life and offers her the chance of a lifetime: a role in a Broadway musical and a first-class ticket on the Queen Mary.

How does she come in contact with Charlie Bacon, and why does she decide to accept an offer that seems too good to be true?

Charlie Bacon is the stranger who turns up at the London boarding house where she’s been living. She’s not stupid, but after the first murder, which takes place in the nightclub she works at, she decides it’s a good idea to get out of London for a while and the ticket, at least, is genuine.

Once on the boat, Charlie pulls some strings to have them assigned to a dining table with the Abernathy family. Who are they, and why does he do that?

The Abernathys are a very wealthy New York family, with lots of influence. They also have plenty of secrets! The initial plan for Charlie and Lena is to ingratiate themselves with the Abernathys because their sponsorship might open doors for her.

And what can you tell us about Franklin Parker, the second murder victim?

He’s the patriarch, a bit past his best after suffering from a stroke. Even though he’s wheelchair bound, his influence is still felt strongly by his daughter’s family, the Abernathys. In his younger days he was definitely a tyrant who used his power to get people to do his bidding.

Lena soon decides that the only person on the ship she can really trust is Will Goodman. Who is he, and how do he and Lena become friends?

Will is the leader of the band that plays in the fancy first-class nightclub on board the ship. Lena is biracial but passing as white. When she meets him, he’s the only person she’s met onboard who sees her for who she is. She’s drawn to him because with everyone else she has to put on an act; with him she can be herself.

I do! I’m currently writing a sequel to Miss Aldridge Regrets, which will be set in Harlem and will follow Lena’s adventures once she arrives in New York.

Louise Hare is the London-based author of This Lovely City and Miss Aldridge Regrets. Find out more about her and her books at http://louisehare.com.