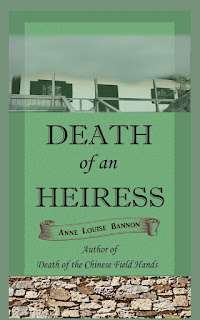 If ever there was a perfect setting for murder mysteries, the ever-advancing US frontier in the nineteenth-century seems like that ideal location. Imagine a time when Los Angeles was a two-bit town surrounded by ranches and vineyards, when California was literally full of gold diggers, and even the train didn’t yet run directly from San Francisco to LA. Guns were ubiquitous, alcohol and gambling poorly regulated, and crime frequent. The problem wasn’t finding dead bodies but separating those that needed further investigation from the many where perpetrator and cause of death appeared all too obvious.

This is where Anne Louise Bannon has chosen to set her historical mystery series featuring Dr. Maddie Wilcox, the widowed owner of one such rancho and vineyard, whose unconventional profession is both welcome and eyebrow-raising in a town where “good” women remain literally and metaphorically confined within the boundaries of hearth and home. Maddie is also distinguished by her beliefs that charity demands her services and, more shocking still, that all men and women were created equal. And thanks to her forthright temperament, she has little compunction about sharing her views with the many other less enlightened folks whom she encounters along her path. As Anne Louise Bannon explains in our recent New Books Network interview, this combination of professional knowledge, place in society, and relative independence make Maddie the ideal go-to person when suspicious deaths are uncovered.

Los Angeles in the 1870s is not the sprawling city we know today. A rapidly growing pueblo of perhaps 7,000 residents, it features vineyards and ranchos, worked by an army of transient men as likely to shoot one another up in bars as stagger home after a heavy night’s drinking. Although ethnically diverse, it is riven by racism, and its relatively small female population is relegated either to the home or to its brothels. When the son of Robert Gaines, one of the pueblo’s wealthier citizens, sets out to rob his sister of her lawful inheritance, he raises eyebrows, but even the town judge has to admit that the son’s behavior is entirely within the law.


In this simultaneously repressive and unbridled town, Maddie Wilcox stands out. As a widow who owns her dead husband’s vineyard and rancho, she has a degree of freedom that most women lack (although Maddie takes care not to defy convention too obviously). And as a licensed doctor, her profession takes her all over Los Angeles as she visits patients in need of care. So when Lavina Gaines, that young woman whose inheritance is now filling her brother’s pockets, dies of strangulation, Maddie sets out to seek justice for her friend. This is, after all, the third suspicious death in the pueblo since the court ruling against Lavina, and Maddie has been called in to assess the circumstances of all three.

This is the fourth Old Los Angeles mystery by Anne Louise Bannon, and readers may want to begin with the first, Death of the Zanjero, before working their way through the series. But even if you start here, you’ll enjoy plunging into Maddie Wilcox’s world. These are fast-moving, well-paced mysteries that often incorporate actual historical incidents and personages and open a vista on Los Angeles that we seldom see.

Images: Photograph of the Los Angeles Plaza in 1869, showing the terminus of the Zanja Madre, mentioned in Bannon’s novels; line drawing of Los Angeles ranchos in the 1840s—both public domain via Wikimedia Commons.