About a month ago, I announced the entry into our family of two kittens. Almost five weeks later, I am happy to report that the boys are settling in just fine. They’ve recovered from their initial funk—hardly surprising once we realized we may have been the first strangers they had encountered, and strangers who packed them up and took them to a completely unfamiliar place, at that. They have learned to trust us to feed them and play with them and welcome their snuggling with us at night. And they have spread out through the house from that one room where they spent their first week. They’ve even acquired a few likes on TikTok, although of course they don’t know that.

Which is all to the good, I think we can agree. So why the question mark in my title? Well, that’s because we already had a cat, as I mentioned in my previous post: a fourteen-year-old female named Mahal, who was once a feral kitten, and her reaction was always something we couldn’t predict. I had hoped that she might see the kittens, because they are still about one-quarter her size, as non-threatening. She once came into the house as a kitten, after all, and the then-resident cats accepted her with little fanfare and no fireworks; she might have done the same.

She might have, but she didn’t. The arrival of newcomers, no matter how small, appears to have thrown her back into the rules of feral kittenhood—fight or flight. For the first week, she ignored the babies entirely. She spent the second mostly in isolation, emerging only to use the litter box and eat the occasional meal. By the third, she had shifted into “this shall not stand” mode, with hissing and scratching, interspersed with retreats to her special hiding place.

She does have cause for complaint. Given half a chance, the kittens eat her food and drink her water, even though they have food of their own and water that is exactly the same. But the toys they love, the cat condo, even the sisal scratching post are things in which Mahal lost interest long ago. And we live in a spread-out ranch house, one where three cats could easily share space without interacting much, especially when Mahal has rarely claimed entire rooms as her own. 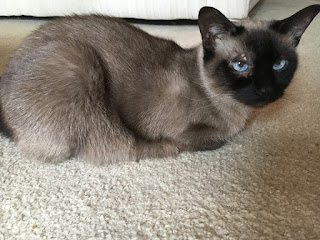 Through constant monitoring and as-needed squirts of water, we have prevented conflict from escalating, but the kittens have learned to give her a wide berth whenever she walks down the hall. On the rare occasions when we leave the house, we still shut them back in that original room to protect them. I’ve gotten better at keeping one eye on the coffee grinder and the other on Mahal, but the need to follow her around really cuts into my morning prep time.

Still, there are moments of hope. Several times over the last few days, Mahal has managed to relax in the family room without constantly watching for kittens. She has patrolled the house and even entered rooms where they are without fluffing out her tail and slinking like one of the Mission Impossible agents entering an enemy fortress. She no longer reacts every time little paws thunder through the living room. I can imagine a time when she might accept that they are here to stay.

Don’t misunderstand me. I know why Mahal reacts as she does. She is a cat, and she sees the kittens as intruders she didn’t ask for or want. I’m sure she’ll come round eventually. But until that happens, I plan to keep that water squirter handy and give her lots of treats and pets when she manages to avoid “flight or fight.”

May we hope even to see a version of this one day? (That’s Mahal on the right, with the older cats who welcomed her.) Be sure that I'll post it if we do! 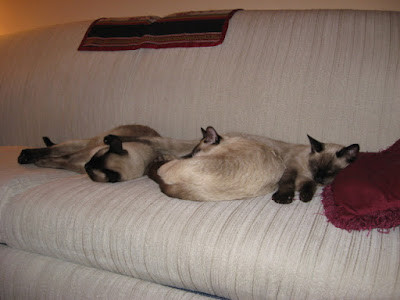