About a month ago, one of my fellow Five Directions Press writers shared on our group’s Facebook page a link to a post by the BBC that asked the provocative question, “Can Technology Help Authors Write a Book?”

Being something of a geek when it comes to writing software, I read the BBC post with interest. It features a program called Lynit, now in beta testing, that supposedly allows authors to track characters, plot arcs, and more.

Now, I have nothing against Lynit, which I haven’t tried. But I was surprised to see this approach presented as something new. Not long after I began this blog in 2012, I wrote a post on my own favorite writing program, Storyist. It’s Mac-only on a desktop but has well-regarded iPad and iPhone versions, and it not only stores information about characters, plot, settings, research, and pretty much anything else I might need as reference—including pictures of my characters on a virtual corkboard—but supplies useful prompts about sources of conflict (in plot sheets), sensory information (settings sheets), and character development (character sheets). All these can be linked and displayed as index cards or outlines—leaving numerous different ways to approach a story to suit the needs of different writers. 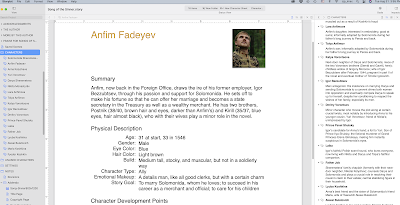 In Storyist, the novel itself lives in a single manuscript composed of chapters and scenes that can be dragged into new positions or exported to styled RTF for Word import or to Kindle/ePub formats for reading. I use it every day I write; indeed, I keep my blog posts in it too, because it doesn’t throw in all the junk that Word does, which can complicate copying the text to Blogger, and it lets me stash a year’s posts in one place. Eventually, when I have a final draft, I import that RTF into InDesign or Affinity Publisher for typesetting. 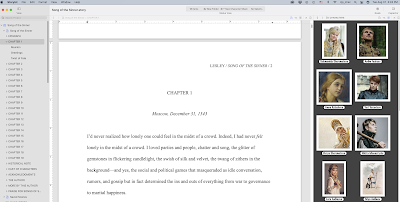 But I don’t produce final e-books in Storyist, which has sufficient formatting controls for basic reading but not for publishing, in my view. For that I use Scrivener, which has a Windows version as well as Mac and tablet apps; many authors love it as much as I love Storyist. Its exact mix of features is, as one would expect, somewhat different, but it too stores research files and a separate manuscript with chapters and scenes. It supplies sheets for storing information on plot, characters, and setting, although they are more rudimentary than Storyist’s. It also stores each clipping of the manuscript as a separate file that must be compiled before use, which gives a writer a great deal of flexibility on export but can be annoying when you suddenly realize that what looks on screen like a single document is actually 150 disconnected pieces. Both Storyist and Scrivener can support more than one manuscript in a given file.

One plus of Scrivener is that it can link to the third program I use—much more intermittently than either of the two previous ones, but that says more about the way I write than the value of the program—Aeon Timeline. Of the three, this is the setup closest to Lynit. As the name suggests, Aeon Timeline allows you to visually display story events and character development over periods ranging from hours to centuries. I used it especially for my novels The Swan Princess (three point-of-view characters operating more or less independently, making it important to know where each one was relative to the others at a given point in the story) and Song of the Sinner (spans 1543–46, with a gap in the middle, during which the hero and heroine are out of contact with each other). I also use it when I’m plotting a story against a detailed historical background, so that I can chart where my invented lives intersect with reality, as in The Vermilion Bird. I haven’t used Aeon Timeline enough to test its limits, but it does allow writers to define their own calendars, so it should be possible to adapt it for all kinds of fiction. 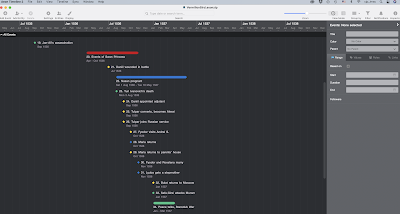 Because, as I said above, I’m rather a geek about writing and publishing software, I have also in the past dipped a toe into Dramatica and Story Weaver, as well as other writing programs too numerous to mention. But do any of them really “help authors write a book”?

Well, yes, if what you mean by “help” is keeping track of information that can be easily lost—that passing mention to a character’s physical characteristics or age, the neat site you found online that explained Tatar wedding customs or calculated the date of Easter according to the Julian character in 1552, the great “what if?” option that came to you the night before which you don’t want to forget, even ideas for other novels that can be stowed in a note to keep you from haring off after them instead of focusing on the book underway. Both Storyist and Scrivener are great for those kinds of tasks, and having the information in the same program as your manuscript so you can click over to the note to check and back again to your writing can prove very handy. Similarly, on those occasions when you need to plot out a character arc or overlapping plot lines, Aeon Timeline or (probably) Lynit would simplify that work.

But alas, whatever their strengths, I don’t think any of these programs can really help you turn a story into a novel. To make that happen, you need to sit down, start typing, let the ideas flow, share the results with respected fellow writers, establish a small library of great books on the craft of writing to which you return over and over, and—last but far from least—revise, revise, revise. And the time put into learning a slew of programs might better be spent typing rough drafts. It’s too easy to get lost in the weeds of technology and forget that its fundamental purpose is to facilitate the act of writing, not to influence its content. 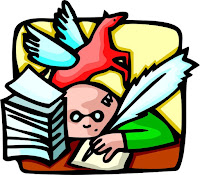 Writing a novel, whether it’s 50,000 words or 100,000, is a marathon, not a sprint, as they say. No piece of software can change that reality. What they can do is provide a good valet or butler, always at hand with a tray or a freshly pressed coat. Think P.G. Wodehouse’s Jeeves with a dash of Star Trek’s Commander Data, and you’ll just about know what to expect.

Images are screenshots of my own copyrighted work, except for the last, purchased via subscription from Clipart.com.