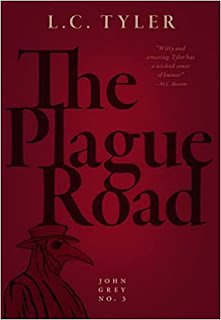 After two years of masking and social distancing while obsessively charting surges and death rates, encountering L. C. Tyler’s The Plague Road evokes an eerie sense of familiarity. The coincidence is not what it seems: this is the third novel in a series set in seventeenth-century England featuring one John Grey; and the series first appeared several years ago, before COVID was anywhere on the horizon. But Felony and Mayhem has decided to republish the books in the United States, and The Plague Road released earlier this week. I didn’t think about the parallels when I first heard about it; I was more struck by the somewhat unusual attention to the Stuart era. Nor do I want to misrepresent the series, the strength of which is the characters of John Grey and his childhood friend, Lady Aminta Pole. Read on to find out more.

The Plague Road is the third book of seven already published in the UK. Why did you pick Restoration England for the backdrop to this series?

At the time I decided to start the series (it was some years ago now), nobody much seemed to be writing crime novels set in the seventeenth century. I thought I might have spotted a gap in the market. Things have truly moved on. Though still not quite as crowded with fictional detectives as the Tudor period, both the English Republic and the Restoration are now receiving a lot of attention. Which, I suppose, they deserve. Particularly during the last days of Oliver Cromwell and the early years of Charles II, it was a great time for plotting and counter-plotting, with the Sealed Knot, the Action Party, the Levellers, the Fifth Monarchists, and many other subversive groups all very active and full of double agents. The Restoration also launched a period of loose morals, flamboyant clothing, political dishonesty, unnecessary wars, and unconcealed greed. All bang up to date, and more than enough to frame the plots for several series …

This book was originally published in 2016, so any echoes of the current pandemic are pure coincidence. But is there anything you’d like to say about that element of the story?

Yes, I clearly had not foreseen COVID when writing The Plague Road, though pandemics occur regularly and it should have occurred to me that we might see another major one in my lifetime. The plague was, of course, much more frightening than COVID because, if you caught it, the death rate was so very much higher and, though plenty of people sold guaranteed remedies for the plague, none of them worked. The medical infrastructure we rely on now was nonexistent. The doctors largely fled London when the Plague struck. Plague victims might be cared for at home (if any of your family were still alive) or in a “pest house,” such as the one at Tothill Fields that John Grey visits in the book. Pest houses were fairly grim places and very overcrowded. The way I describe the physician having to walk across the beds to get to patients, because there was no room to walk between the beds, is based on contemporary descriptions. On the other hand, unlike COVID, the Plague does seem to have been relatively easy to avoid if you were rich enough and weren’t obliged to live in close proximity to Plague victims. The royal court, like the doctors, simply left London. Samuel Pepys sent his wife to the country but remained at his desk, and although he had several frights such as his hackney coach driver collapsing halfway through a journey (Pepys ran off as fast as he could), he survived to tell the tale. I mean literally, in this case. The Diaries are always worth reading. 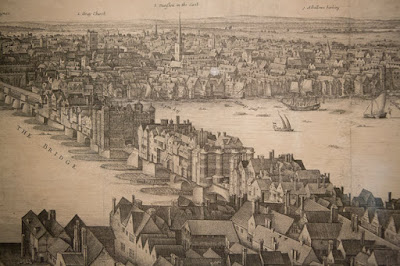 More generally, what is John Grey’s London like in 1665?

It was very different from what it would be a couple of years later, since most of the houses, churches, and civic buildings would be swept away by the Great Fire in 1666. 1665 was therefore the last year of the ancient medieval city—half-timbered houses, narrow lanes filled with rubbish of all types, all dominated by the massive nave and stumpy tower of Old St Paul’s. It would have been crowded, smelly, and noisy—side by side with the many elegant gardens and the Palace of Whitehall, there were plenty of workshops, slaughterhouses, and tanneries. London at that time possessed only one bridge—London Bridge—which had been rebuilt and patched up many times. The bridge was one of the great sights of the city and was noted for two things. First, there were rows of houses, up to seven storeys high, built on it. They encroached on the road and made the crossing a dreadful bottleneck for travelers. Second, the arches of the bridge were also very narrow and dammed back the Thames, so that at each tide water rushed through them at high speed. “Shooting the arches” in a small boat was something that you could do if you were young and drunk enough and wanted to impress the girl you were with. London Bridge was proverbially “for wise men to pass over, and fools to pass under.” If you were still alive on the far side of your chosen arch, you could celebrate by visiting one of the new restaurants (“ordinaries”) or one of the coffee houses that were just coming into fashion. The theaters had recently reopened after the ban on acting during Cromwell’s time, and for the first time ever actresses were permitted on stage. So London was crowded, smelly, and dangerous, but you could have fun.

And John Grey as a character? What can you tell us about him, as your window on the novels?

In the first book in the series (A Cruel Necessity) John Grey has just finished his studies at Cambridge University and is about to begin training as a lawyer in London, though he finds himself being dragged, partly by circumstances and partly by inclination, into the world of espionage. He is bright and personable, but still somewhat naive and a bit too trusting. The Plague Road begins some seven years later, during which time he has both become a fairly successful lawyer and has worked as a spy, first for Cromwell and then for Charles II. During those seven years he’s had to learn a lot of things and does actually have the scars to show for it. I wish I could tell you exactly what he did between books 2 and 3, but I made the decision to jump forward from Cromwell’s death to the Plague Year, and I will probably now never know what he got up to, though every now and then Grey drops hints that he was in Brussels or the West Country on a particular date. Anyway, by 1665 he has become one of spymaster Lord Arlington’s most trusted men and capable of fighting (Arlington once blackmailed a fencing master into giving Grey lessons) or of talking his way out of most things. His personal life is, however, a complete mess, as is obligatory these days for all fictional detectives—see below.

And what is Grey’s central problem in this novel?

1. That he did not marry the woman that, clearly, he was meant to marry. 2. That somebody has tried to dispose of a body in a plague pit, even though the knife sticking out of the corpse’s back suggests death by some cause other than the Plague. 3. That his boss, Lord Arlington, only ever gives him half the information that he needs.

We learn early on that the victim, Charles Fincham, is both actor and spy, which is an interesting combination. Was that common at the time?

Spies—both men and women—came from every possible walk of life. They were recruited wherever and however the government could do it. Some were professional. Some were amateurs. Some had served as soldiers during the Civil War and failed to find any other way of living during peacetime. Some accepted employment as a spy as an alternative to being hanged for some minor (or major) offense. Some spied out of conviction for a cause. Most did it to a greater or lesser extent for the money. Actors and writers do seem to have featured quite prominently, being good at impersonation and at coming up with plausible stories. The playwright Aphra Behn is one of the better known examples. She undertook at least one mission to Bruges for the government in the 1660s, for which she was probably never paid, and may have done other work for Arlington and his assistant Williamson in the following decade—like John Grey, Behn has a gap in her life history when we know little about her.

Is the plan to publish all seven John Grey novels in the US? And what are you writing now?

I suspect that whether all of the John Grey books are published in the US will depend very much on how many people buy them. (Yes, dear reader, that is a hint.) I’ve just finished writing John Grey #8, which is set in the world of the Restoration theater and the immoral and licentious court of Charles II. Prepare to be mildly shocked.

Excellent questions! Thank you for asking them!

L.C. Tyler is the award-winning author of the Ethelred Tressider and John Grey series, as well as the standalone novel A Very Persistent Illusion. Find out more about him and his books at https://lctyler99.wixsite.com.